Check back as we update this post throughout the day.

National Signing Day is upon us. Check back throughout the day as the letters of intent come rolling in.

11:54 AM: Via GoldandBlack.com, Jemison will be signing with Purdue later this afternoon.

11:46 AM: It appears that's it for us today. We'll keep you updated on Tyvel Jemison as we hear anything. All in all, a decent class for the Boilers; the offense should be a lot of fun to watch in the future.

In my opinion the biggest Big Ten performers today were Penn State and Indiana. Penn State has arguably the fourth best class in the conference after Ohio State, Michigan, and Nebraska. To pull in a class like they did just a year after the Sandusky fiasco and facing the recruiting sanctions they are, it was great. QB Christian Hackenberg is a Top 25 player nationally and gives Penn State an anchor for the next four years.

For a team that has played as poorly on the field as IU, they've scored a great recruiting class. Let's be honest, it's nearly impossible for anyone to out-recruit Ohio State, Michigan, or Nebraska and IU had arguably the best recruiting class behind the Power 3, Penn State, and Wisconsin, depending on who you go by. And as I said, what makes that so much more impressive is how bad that team has been on the field.

11:13 AM: According to Scout.com, here are the members of the Midwest Top 150 that have committed to Purdue:

11:08 AM: DB Tyvel Jemison of Fort Wayne has hinted on his Twitter that he'll be signing with the Boilermakers today, though based on Internet chatter there may be worries about his grades.

11:03 AM: Although this class won't be as highly rated as last year's, which was as high as #33 according to some services, there is a lot of talent in this class. The big worry is the lack of offensive linemen, a position that is already thin. 2-star Jason Tretter out of Ohio is the lone man on the offensive line, barring any position changes for anyone in the class.

11:01 AM: After DT Johnny Daniels makes it official here any minute, it would appear that will be the complete class.

10:42 AM: Here is a highlight video of Hunte for those interested. He looks great in run support against a high level of competition in Florida, with their rival school, Miami Northwestern, being the #1 ranked HS team nationally in 2007. He comes from the same high school as current NFL RB Willis McGahee.

Of note, most websites have his listed height as 5'10'' while the video (uploaded six days ago) has him at 5'8" and 15 pounds lighter.

10:34 AM: Just wanted to correct what I said earlier. Hunte is a former NC State commit. His decision today came down to Marshall, Syracuse, and Purdue. Hunte is a three-star cornerback out of Miami. First "surprise" of the day. Not a whole lot of info on him out there, but ESPN does list his traits as "zone coverage" and "run support."

10:28 AM: A decision from Da'Wan Hunte should be coming soon. Looks like he will sign with Purdue, based on his conversation with Johnny Daniels. 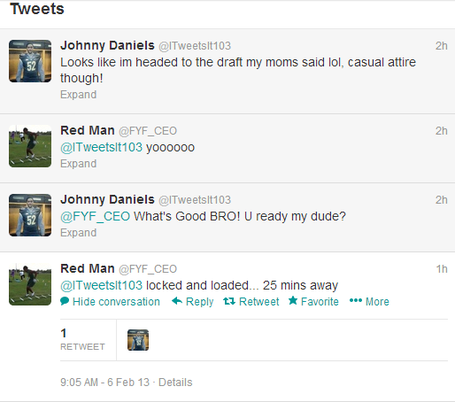 Edit: And yes, Da'Wan Hunte has now signed with Purdue.

10:16 AM: Yes, as mentioned by a few commenters, Purdue signee Dalyn Dawkins is the nephew of former NFL safety Brian Dawkins. Darrell Hazell compares the 5'8" 180 pound running back to Dri Archer, the star he coached at Kent State last year. If he uses Dawkins like he used Archer, expect Dawkins to see some time in the slot.

10:12 AM: Ole Miss continues to rise and is #6 in the ESPN rankings. Goes to show you what a gameday atmosphere like Oxford can do for you.

10:02 AM: As mentioned by BoilerTMill, Johnny Daniels is the first D-1 signee from his high school and will be signing at a ceremony in front of his classmates.

9:46 AM: Depending on where you look, either Alabama or Michigan has the best class nationwide. Again it all comes down to judgement though, as both Rivals and 247Sports have Bama at #1, while Scout has them all the way at #8. Scout has penned Michigan as having the #1 class so far, while the other two sites don't even have them as the best class in the Big Ten (Ohio State).

Ole Miss and UCLA are having great days with both getting Top 10 nods.

9:43 AM: By my quick count I believe only 3 expected LOIs are left unsigned. So far a very expected day.

9:33 AM: According to Scout.com, here's how the conferences stack up. The Big East's best recruiting class is Rutgers, who will be leaving them in 2014. Go home Big East, you're drunk. 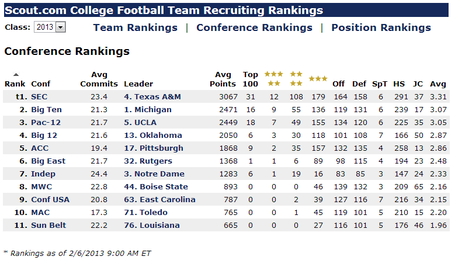 9:29 AM: Thanks for rubbing it in, Kirk. As expected former Purdue commit Randy Gregory has signed with Nebraska.

9:24 AM: Clark was the first commit under Coach Hazell, although most of the work was done by former Coach Hope. You can check out the H&R write up here. Interesting fact: His team went 0-10 last year.

9:22 AM: DB Leroy Clark has signed. Clark is one of Purdue's top incoming players and held offers from Florida, Mississippi State, Oklahoma, West Virginia and others.

One spot drop in Rivals and Scout. Like I've said before, I don't put a whole lot of stock in the rankings, especially such minuscule movements as dropping a spot or two, but still an interesting stat to look at. I'd expect the class to drop a few more spots unless Purdue gets a surprise commit.

9:13 AM: I'm interested to see how Darrell Hazell will do with a full year to recruit. He did a great job holding the key pieces of this class together after Hope was fired, while also adding some nice pieces in just a few weeks.

9:09 AM: I have to imagine redshirt freshman RB Robert Gregory gets moved to the WR position come spring. He's 6'3" and like I said earlier, we have a surplus of talent at the running back spot now. Purdue is going to have some height at WR in the future...returners Dolapo Macarthy and Charles Torwudzo measure in at 6'5" and 6'4" respectively.

9:02 AM: WR Deangelo Yancey is official. Provides some good size at the WR position. Actually, of the three committed WR, you have heights of 6'2', 6'2", and 6'3", although one of those WR, Myles Norwood, has yet to sign his LOI.

8:49 AM: Going off my last update, new coach Darrell Hazell has said a focus of his coming in will be recruiting Indiana. Indiana isn't know for its high school football talent, but still puts out a few good players every year. Under Danny Hope, recruiting Indiana became a low priority and as a result Indiana University was able to gain a step up in the state. This year IU is bringing in three four-star recruits from Indiana. The state's top recruit, OLB Jaylon Smith, is going to Notre Dame.

QB Danny Etling is one of two Purdue ESPN300 recruits (Keyante Green is the other). Etling comes in as an Elite 11 finalist and one of the top quarterback recruits in the nation. He is one of only two recruits from Indiana for Purdue.

Not a whole lot of information out there on Hunte but it looks like North Carolina State and Marshall will be his other options.

8:33 AM: RB Dalyn Dawkins is now official. Dawkins is also a recent verbal to coach Hazell. ESPN and Rivals have him as a three-star recruit but Scout has him as a four. Purdue has a lot of talent coming back to the running back position next year and this class will only further increase the talent at running back. It will be interesting to see how coach Hazell balances all the bodies in the stable, but remember he did have two 1,000 yard rushers at Kent State last year.

8:26 AM: Keith Byars II, son of the former NFL running back with the same name, has made it official. Byars was a recent verbal. Depending on where you look he goes as a two or three-star and adds to a great class at the running back position. He had offers from the likes of Louisville, Kentucky, Maryland, Rutgers, and Vanderbilt but didn't receive an offer from his father's alma mater, Ohio State.

8:14 AM: In non-Purdue news, #1 recruit DE Robert Nkemdiche picked Ole Miss this morning. Not really a surprise but he also took visits to LSU and Florida. His brother playing at Ole Miss may have been a factor...or maybe it was the sundresses.

8:10 AM: For those of you who put any stock in the recruiting services, as of this morning Purdue's class is at:

8:04 AM: Dan Wetzel of Yahoo Sports! wrote an interesting article last night regarding the dominance of the SEC when it comes to recruiting. Arkansas' recruiting class is ranked 13 of 14 in the SEC, yet would be the 4th ranked class in the Big Ten. Kentucky's recruiting has also taken off under new coach Mark Stoops as they've now worked themselves up into the 30th spot as of last night. Last place in the conference? Missouri at 46, good for seventh in the Big Ten. SEC, ya'll.

7:41 AM: RB Keyante Green was the first Boilermaker to make it official this morning, signing his letter of intent roughly 30 minutes ago. With the recent commitments of Keith Byars II and Dalyn Dawkins also at the running back position, Green had voiced his displeasure on Twitter and though his verbal commitment never wavered, it's good to finally have it in writing.