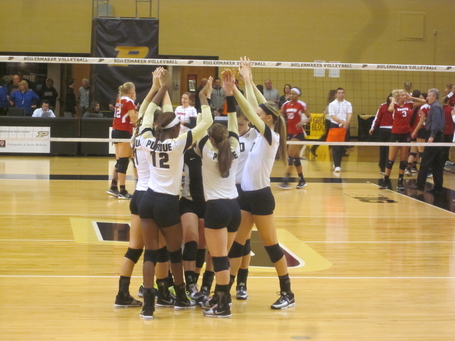 The first set featured many ties and lead changes. Purdue got a lead to start but was soon down 6-4. From there on neither team won more than 3 points in a row til Purdue broke it open with a 5 point run to go up 19-16. Ohio State soon caught up and they continued to exchange points, tying at 22 and 23. But a Faye Adelaja and an OSU error allowed Purdue to escape with the win.

Purdue started the second set strong and maintained their lead for the whole match. Catherine Rebarchak and Annie Drews each combined with Kiki Jones for blocks to spring Purdue to a 5-0 lead. Ohio State got back within two at 5-3, but that was as close as they would get. Errors plagued the Buckeyes and Purdue extended their lead to 8. Purdue ended up winning by, closing the match on a 6-1 run.

Going into the third set Purdue hoped to dominate like they had the second but Ohio State regrouped and put up more of a fight before going down 25-21. Ohio State lead early but that was the last time they would have the advantage. OSU remained close throughout the course of the match. Purdue left the door open for them late in the set after 3 consecutive errors cutting the lead to one, 22-21. Purdue regrouped and closed the match out on kills from Val Nichol and Sam Epenesa. The front line combined for 6 blocks in the final set and Epenesa led the offense with 5 kills.

Purdue's balanced offense was enough to overcome a strong performance from Ohio State outside hitter Kaitlyn Leary who paced the Buckeyes with 15 kills. Val Nichol had plenty of support from her teammates; Epenesa- 9 kills, Rebarchak-8, Jones-7, Drews-6. Cramer got help on defense from Nichol who had 7 digs and Hilliary Fox who had 8. Rachel Davis dished out 22 assists while Nichol had 15.

Saturday night Purdue is hoping to follow-up its first win this season over a ranked foe with another as they square off against No. 5 Penn State. Volleyball powerhouse Penn State leads the series with Purdue 48-6. The 2010 was the most recent win for the Boilermakers over the Nittany Lions. Heading into this weekend Penn State's offense is hitting .343; comparatively Purdue is hitting .235. Purdue will have its work cut out for them defending a volatile offense.