The 2014 season is just around the corner, and we've still got plenty of holes to fill for next year.

Share All sharing options for: Purdue Football Recruiting: Needs for 2015

With the news of several offers going out this week to players for the 2015 season, we can start to really focus on what our needs are going to be for Coach Hazell's third season at the reins.  This seems like such a frustrating time to be doing so, with the 2014 season just around the corner and still lots of question marks all over the place.

Here's a VERY rough updated scholarship grid.  There are still about 20 or so players from the official roster that aren't on this grid because they're either walk-ons or I couldn't find any information about them committing or an offer going out.  Like I said, it's still very rough but this gives you a general idea of where we stand.  As things start to solidify over the next few weeks, I'll update the grid to something more concrete.

With that in mind, let's take a look at where we stand at each position.  I lumped cornerbacks and safeties into "DB", all offensive linemen into "OL", and I omitted kickers and long snappers (sorry, friends), just to keep things very general at this point.  Remember, all of these numbers are approximate (and they don't include walk-ons) so don't get too worked up if they aren't exactly what you were expecting. 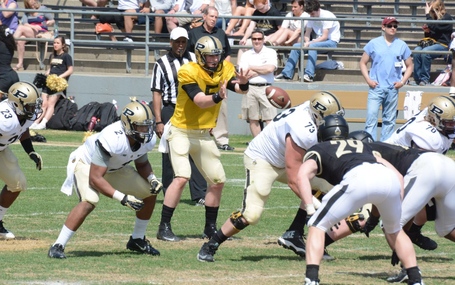 Looking at this list, I'd say our most glaring needs for 2015-2016 are on offense - specifically, running backs and tight ends.  We actually have a very solid tight end core this year, but we will be losing at least the 4 seniors, and we will have no senior TE on the roster next year, so this is an area I'd like to see us pursue.  We have several talented running backs coming in, but (again) no seniors on the roster for next year.  We definitely need to be filling some holes in the backfield as a priority.

Our receiving corps is young and very deep.  Even if one or both of the incoming freshman receivers decide to redshirt, I believe we are pretty solid at the position for this year and next.  Of course, you always want to bring in some fresh blood to get experience, so don't be surprised if a few more offers go out.

The offensive line is also fairly young but still has lots of potential.  I think we're going to see a lot of improvement with this group over last year's disaster.  The two transfers we have coming in (David Hedelin and Corey Clements) should both be contributing from the start, but we only get them for two years.  Grooming replacements for them and the other upper classmen needs to start now, so I'd expect more offers to be going out for lineman, but not nearly as many as we have had the last couple of years.

Quarterback is always a tricky position to forecast because you never know how these guys are going to pan out.  As we know from experience, having 3 or 4 competing on the roster can still be a nightmare.  We have three very talented signal callers that will most likely all be back in 2015 still competing for the job.  The coaching staff should limit their offers at the QB position to one or two over the next couple of years. 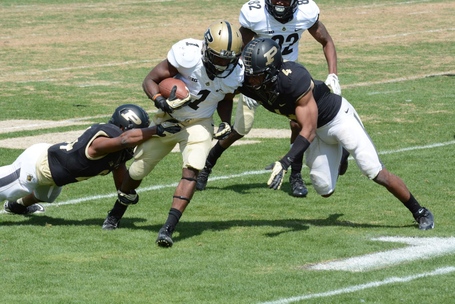 As far as personnel numbers go, the defense is actually pretty solid next year.  Performance obviously remains to be seen, but I have a strong feeling our defense will perform more towards the middle-of-the-pack in the B1G this year than the bottom of it.

We have a small army in the secondary, so I'd venture to say that our biggest defensive needs for 2015 are linebacker and then the defensive line (especially DT).  The bottom line is that we absolutely must improve at stopping the run first.  I actually like the talent in our secondary and I believe they have the right guys in place to soften the blow of the loss of Ricardo Allen.  I would prefer not giving up three 100-yard rushers to IU in a game ever again, and that all starts with the guys up front.  I'd like to see Hazell go after some talented linemen for 2015 to add to our list of already promising recruits.  Having said that, I believe we only have something like six linebackers on scholarship for next year, so that will have to be addressed first.

If we still have about 20 scholarships to fill for next season, this is my current "need" list for 2015, along with the number of spots I'd like to see filled in parentheses.