Danny Hope comes out of the shadows and speaks with WLFI

Danny Hope made his first public interview since he was fired in November. WLFI has released the interview in a 2 part series. This has been brought up on FanPosts and FanShots, and we finally have video of the first part of the interview.

Share All sharing options for: Danny Hope comes out of the shadows and speaks with WLFI

Hope On The Record, Part One

Despite a 22-27 record during his time at Purdue, Danny Hope continues to be defensive about his record and that he deserved to remain the football coach at Purdue.

I have nothing against Hope, but he is not worthy of being a coach in a major BCS conference, which he doesn't seem to realize yet. Hope would be a decent coach in a mid-major conference, or even back in the FCS, but when your biggest win was back in 2009, it's time to just let go and move on.

Hope commenting on attendance decreasing since 2000 needs a closer look. After the renovations in Ross-Ade Stadium were complete in 2003, the capacity decreased from 67,332 in 2001 to its current capacity of 62,500, so let's look at the data since 2003. 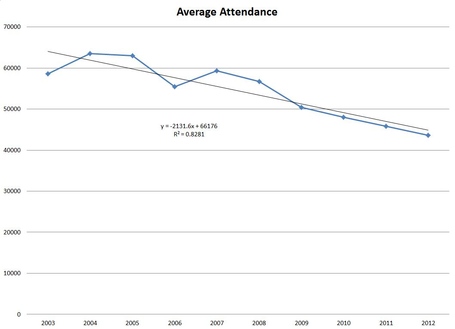 There was a steady decline in attendance under Hope's tenure that showed no signs of increasing, and Burke has stated since Hope's firing that poor attendance at football games cannot support a financially independent athletic department. With HDTV becoming the norm, people are not going to pay $40+ a ticket to see a team struggle in person when they can just watch it in the comfort of their home. We can all agree that Hope had to go. No one wanted to see the product on the field. The 2012 season ended up collapsing under his direction, and only seemed better because they beat 3 of the worst teams in the Big Ten to finish the regular season.

In my opinion, Hope hurt his PR with this interview. It would have been one thing if he came out and said "you know, we could have done better, but we didn't." Rather, he uses this as a chance to speak against Burke's decision, which won't sit well if other programs are looking to hire him.

Many of you have left comments on the original FanPost, but feel free to continue the discussion here. I will post the 2nd part of the interview tomorrow.

Hope On The Record: Part Two