I wanted to take a look at just how bad it’s been over the last 13 years. Why 13 years? Well, because that will give us a glimpse into the tenures of the Tiller, Hope, and Hazell eras. Most lament the decline of the Tiller era as when our troubles started; a lot accuse Tiller of ‘phoning it in’ and ‘not giving a shit’. That may be true to some extent, but it still gives us a peek of when times were relatively good (albeit not their best), and will allow for an objective comparison against his successors’ eras (also known as the ‘Whiskey Years’ or ‘The Great Morgan Burke Bamboozle’). Also, 13 years seems to be the sweet spot for finding statistics and compiling those statistics while at work.

NOTE: I checked a few different websites for stats, inconceivably, none were identical. Most websites were within ± 10-20 yard averages of each other, but for some reason, it appears that yearly stats aren't amassed in the same way. Regardless, the point isn't to get bogged down in particular stats or minor inaccuracies, but to see the bigger picture…and quite a picture is revealed. And every-time I do this, there is usually some minor errors and one or two big oversights - so be it; it's unintentional.

But no, it’s not a bad dream; we have been on a pretty steep, consistently reliable slide for the better part of the last decade. At this point failure is almost a predictably calculable eventuality. Those smarter than I, and with access to a programmable calculator, could probably predict within a small margin the outcome of all remaining games.

But I digress, lets look at our performance by the numbers. There's nothing shocking here, nothing that we didn't already know, but it's nice to review with some visual aids. Sometimes we get caught up in minor victories/defeats/coach-speak and forget to look at the long-term trends.

Surprisingly, our total offensive production has remained relatively static over the last 13 years. There’s been a few peaks and valleys, but over the long haul our rushing and passing statistics have only slightly decreased. That’s good news of course, and will probably come as quite a revelation to most (myself included). As we’ll see later though, this doesn't tell the whole story. Furthermore, the 2016 statistics are no doubt skewed by our FCS opponent. 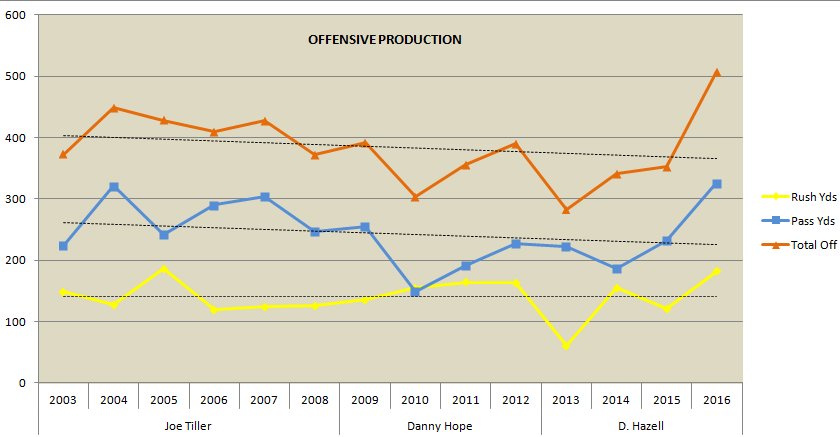 This is where things really start to come into focus. While our offensive production has been slightly reduced, it’s the difference in points scored vs. points allowed that have killed us. This of course, can only mean one thing, and that thing is our defense. 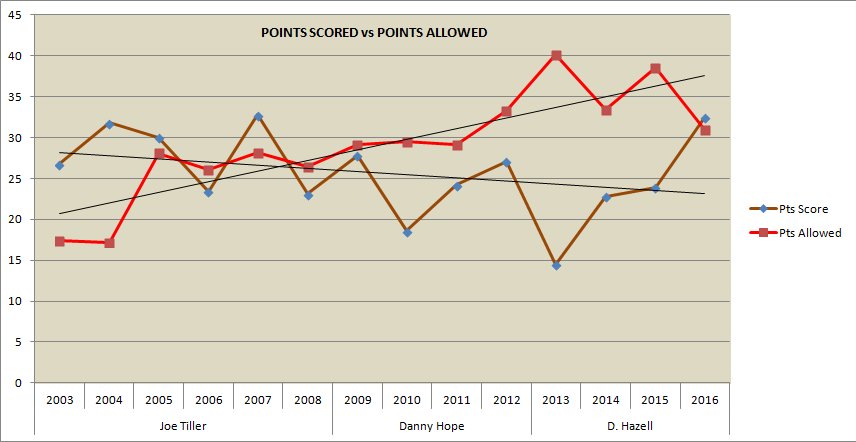 Here we see the defensive numbers. Surprisingly, our pass defense has remained flat, and is even more efficient than the Tiller years. But, that relatively good corner/safety play has come at the expense of our run-stop, and general D-line play. What was once proudly declared the Den of Defensive Ends has been reduced to a no-kill 2nd chance shelter for abused linemen. Opposing quarterbacks have been known to set-up lemonade stands in the backfield in their free time; running backs skip down the field as carefree as little girls chasing butterflies. 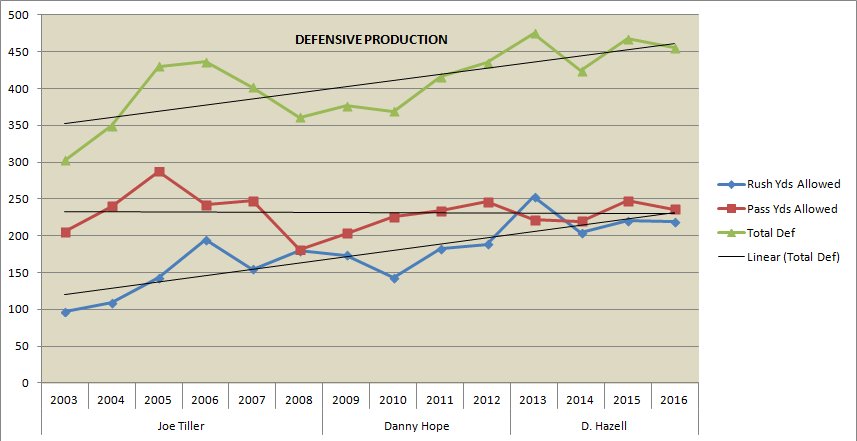 Not surprisingly our turnover margin leaves quite a bit to be desired. What is it that coaches say? "We've got to win the turnover battle." Well, don't look now, but...

It seems to me that we've never done particularly well in this category. This year it's the offense, but most years I just don't think our defense generates too many take-aways. We've got to get better.

This is, I think, the bane of most Purdue fans’ Saturday afternoons. We can’t stop anybody on 3rd down. We’re not even close. In fact, we’re so poor at stopping 3rd down conversions, that it’s like watching Secretariat pull away for 31 lengths in the 1973 Triple Crown – sometimes there’s not even a Purdue player on my television screen; it’s just the opponent running, and running, and running…and running. Offensive coordinators must be like a kid at Christmas the night before a Purdue game: "And on this 3rd down play we’re going to do this, and on that 3rd down play we’re going to try this…oh boy! I can hardly wait!" It’s funny…but it’s not. Opponent 3rd down completion % has not quite doubled in 13 years. That’s a special type of ineptitude, one bordering on retardation. If Danny Hope started that fire in a trashcan, Darrell Hazell has taken that trashcan, put it in a national forest, thrown gasoline on it, and burned down four states. 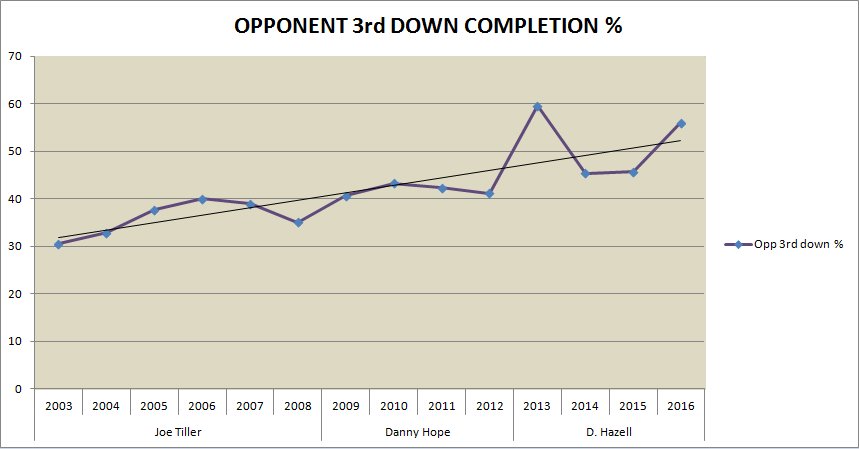 What can we say? It's not good. Just think how bad it'd be if we didn't have Kerrigan for those four years in the Hope era. Yikes. The scouting report on us must be pretty appetizing to opposing quarterbacks.

If the red zone was our daughter, she'd be scored on more than a Kardashian. Ba boom. But seriously, our opponents convert between 4/5 and 5/5 (yes, amazingly 100%) of the time. We, on the other hand, usually convert a mere 75% or so. Note: Red zone conversion is equal to a TD or FG.

It will be raining hundreds of millions of dollars in West Lafayette over the next decade. Buyout excuses will not fly anymore. I'm taking the build it and they will come approach; finish the south end zone, add lights, and add some swag to the athletics department. Capital improvements are only part of the equation, we need genius marketing too. 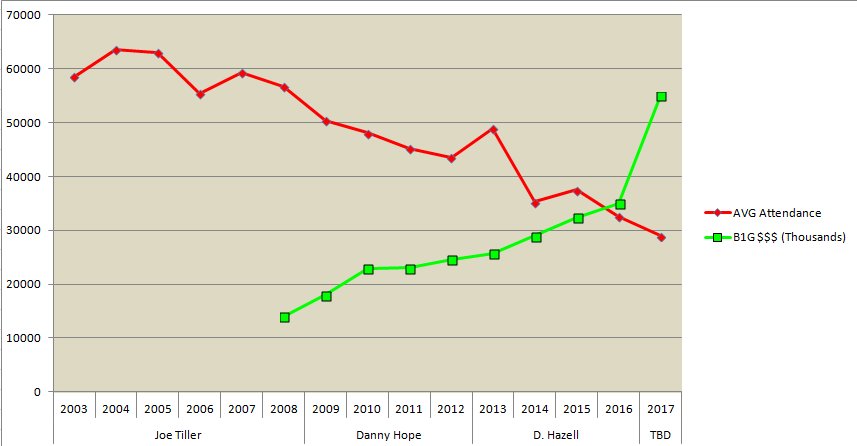 Fire Hazell. Now. There’s no (objectively) getting better. Nobody is improving from the inside out. It’s all been a big ruse – politic speak. I wanted to believe. I didn't want to be negative - again. But you know what they say, "Fool me once, my fault, fool me for 13 years and I'm a damned idiot."

Purdue has got to be the only school in the country that shows an inverse relationship between an infusion of ridiculous amounts of cash thrown at them and performance. It really borders on criminal. Based on 2017-2020 revenue sharing estimates, Purdue will have enough money to buy-out Hazell five times over, hire a real coach, with a real staff, and still improve facilities. Hazell seems like a nice guy, and I admire his refusal to give into facts. But, there comes a time when we’re forced to look in the mirror…and make the easy decision. When a middling non-Power 5 opponent manhandles your program for the 2nd time in four years, it’s time to throw in the towel.

The sad thing is, we have talent on this team. Jones is a potential all-B1G caliber RB, Blough has shown flashes of competence (if not brilliance), and our LBs are solid (when they're utilized on the field) - but the result remains the same. We simply cannot afford to lose any more ground.

The time is now, and that time is for this welfare queen to get off her big fat ass and become a productive member of society again.

Note: B1G payouts per school per year were exceptionally difficult for me to locate. Some years that info is available, other years I had to estimate. Point is – it’s a lot, and is only going to grow with the newly signed television contracts from Fox, CBS, and ESPN.

Items in the FanPosts are entirely at the discretion of those that post them. They do not represent the views of Hammer & Rails, SBNation, or Purdue University in any way.

More from Hammer and Rails