The Boilermakers traveled to Champaign Illinois this past weekend to open the Big Ten season against the Fighting Illini. The Boilers have had a rough start to the 2014 season, having the second hardest schedule in the country next to Stanford. They have competed well, but unfotunately lost close match ups against good competitors.

The squad traveled to San Diego to start off their Spring Break against San Diego State which is coached by the great Tony Gwynn himself. They played a four game series, dropping all four. Sophomore Kyle Johnson took a an 85 mph slider from projected first rounder Michael Cederoth over the left field wall on Friday night. On Monday we blew his first save, however, and lost on a walk off hit by SDSU. that dropped the overall record to 1-14

The team then traveled to Butler on Wednesday of spring break to face Butler. This was supposed to be the home opener but field was deemed unplayable. Lead by freshman Adam Dressler, the Boilers picked up their second win. 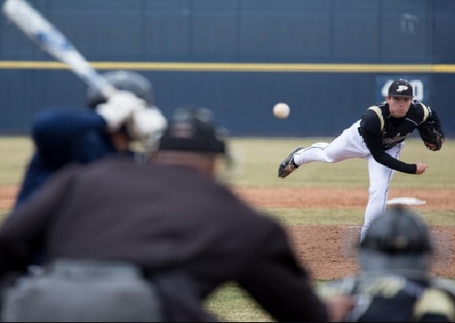 To conclude the spring break trip we hopped on the bus and made the ride to Carbondale, Ill to play Southern Illinois in a weekend series. This was the opening weekend for Big Ten play, but with how the schedule fell, it was our bye weekend. We took the first game but then couldn't close on the second game which went into 16 innings.  Purdue also dropped the third game to fall to 3-16. Sean McHugh had a big weekend, blasting two home runs.

The team finally had its home opener last Wednesday against IPFW winning 7-1 and giving Dressler his second victory of the year.

Then we opened at Illinois for Big Ten, taking the first game in dramatic fashion. Mike Lutz induced and started a game ending 1-2-3 double play. Jordan Minch picked up his first win of the 2014 season as the Boilers won 4-3. However the taste of victory didn't last long, the Boilers dropped the next two games and the series 6-2 and 8-3 to fall to 5-18, 1-2 in the Big Ten.

The Boilers return to action on Wednesday at University of Illinois-Chicago and then return to West Lafayette for its home opening weekend series against Big Ten competitor Penn State.