After projected winter weather to hit Missouri State, the Boilers will be heading to Samford instead.

After a week of long tough grinding practices the Boilers will be heading to Birmingham, AL rather than Missouri State.

Missouri State canceled its home opener versus our Boilers after expected winter weather is coming across the Midwest this weekend.

The squad will be playing a double header on Saturday starting at 10:30am against Butler than playing host Samford at 2pm. The weekend was originally scheduled for Butler and Samford in a three game series, but with our cancellation, the teams welcomed us with opened arms.

The Boilers played Samford five times last season and only taking one of those games. The only win came at a neutral site, Mississippi State, which was the first contest between the two teams. Samford swept the Boilers at their place the following weekend.

We are scheduled to play Butler twice this year prior to this weekend, the Alexander Field home opener on March 19 and April 15 in Indianapolis. The Purdue-Butler series dates back to 1888, with the Boilers having a 100-33-3 edge all-time. The Boilermakers' nine-game win streak in the series dating back to 1996 was snapped last year when Butler walked away with an 8-4 win at Alexander Field.

Prior to this weekend and after the rescheduling in the opening weekend in Tennessee, the Boilers would have had no neutral site games on their schedule. The 2007 season was the last time that the team only played one-neutral site game.

This weekend we will really see what type of team we are dealing with this season. After coming off two tough away series, Tennessee (now ranked #28 and 7-0) and #11 Rice, the Boilers will be facing a 3-4 Samford team and a 1-4 Butler team. I hope to see us walk away with at least one victory if not two.

Butler has had 4 games canceled this season, the only win that the Bulldogs have had was a 7-6 win in 10 innings over Illinois State in Nashville, Tenn. The Bulldogs are led by offensive power hitters Marcos Calderon, batting .500 with three doubles, a home run and three RBIs, Nick Bartolone who is batting .364 with two doubles and two RBIs. The Boilers will be facing right-hander Kyle Kramp (0-1, 6.48 ERA).

Samford is led offensively by freshman Heath Quinn, batting .517 with four doubles, two home runs and nine RBI. Tyler Filliben is hitting .464 with three doubles, a triple, a home run and eight RBI. Caleb Bryson leads the team in RBI with 10 so far this season. The Purdue squad will see right-hander Alex Milazzo (0-0, 6.23 ERA) on the hill. 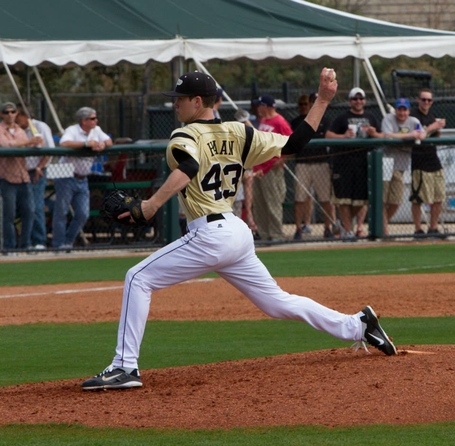 Leading us offensively right now is Kyle Wood, batting .300 with four doubles and an RBI. Steve Maniago is batting .278 so far this season. Cody Strong is leading the team with On Base Percentage with .421. On the mound, Coach Schrieber will be handing the ball to right-handed pitcher Brett Haan (0-0, 19.64 ERA) in the Boilermakers' first game against Butler. In Saturday's second game against Samford, Purdue will start left-handed pitcher Jordan Minch (0-2, 7.84 ERA).