Yes, Purdue won, but this certainly feels like a loss.

Last week at this time we all hoped it was a fluke. Purdue's offense looked awful in a 42-7 loss at Cincinnati, but we expected that the Bearcats were a good team. Facing an FCS team, where Purdue has always been dominant regardless of circumstances, we expected better today.

Instead, we are now likely in for a long season.

Just about the only positive you can take from today is that it was a win. With FCS teams knocking off FBS foes all over the place, Purdue at least avoided the ignominy of losing to their FCS opponent unlike Kansas State, Oregon State, South Florida, Connecticut, and others. There wasn't much else that was good.

I said before the game that we should be greatly concerned if something wasn't working on offense. Well, consider us greatly concerned. In the first half Purdue had seven plays in which it needed to gain a single yard for something positive to happen. This is with a team that was supposed to be tougher and have a power rushing attack. If you can't get said yard against an FCS team there is little hope you're going to get it in the Big Ten.

This is beyond alarming. Where was Brandon Cottom, who was supposed to be the power back and the thunder to Akeem Hunt's lightning? Where was at least a run/pass option for Rob Henry, a mobile quarterback that is far better on the run than in the pocket? Where was the offensive line, who was unable to block or create any kind of a hole in the first half against and FCS-caliber defensive line?

After two weeks it is clear that the offensive line is a glaring weakness. Justin Kitchens, Kevin Pamphile, Trevor Foy, and Devin Smith are all seniors and should be better. Instead, they were pushed around by the Sycamores today. Purdue finally got the offense going when Sterling Carter and Patrick Bade were in as blocking double TEs, but if Purdue needs seven blockers plus a fullback just to move against an FCS team we're in real trouble against anyone else.

The defense, at least, was a big positive, as it pitched a shutout and was solid until George Cheeseborough caught a fourth down TD pass that Anthony Brown misjudged in the air. That served to ignite the Trees, and Mike Perish turned it on against a defense that was honestly exhausted because it had to be virtually perfect with the offense doing nothing. By the time Ricardo Allen sealed the game with an interception I don't think they had anything left. They did only give up 39 yards rushing, but this was against a team missing a very good running back. Make no mistake: Purdue probably loses today if Shakir Bell plays.

I don't even know what it is with the offense. We heard it was going to be tougher and we expected more of a ground game. Instead, we have a line that can't block, Henry looks completely confused, and both Hunt and Dalyn Dawkins have no holes to run through.

Many of Purdue's best plays were ones that broke down, like when Gabe Holmes and Hunt found themselves open underneath. Even then, Henry was running for his life after protection broke down. B.J. Knauf was also good on end-around runs, with one leading to his first career touchdown.

I know I am not alone in being scared for the rest of the season. Henry looks awful and he was the guy that clearly beat out Austin Appleby and Danny Etling. At the very least I think it is time to try some of the redshirt freshmen offensive linemen, because the current crew is not getting it done. Purdue basically needed a trick play to give us a kickoff return for a touchdown in order to beat the weakest team on our schedule. Poor clock management and play calling left 11 points on the field in the first half on first and goal situations, another field goal was missed, and there were far too many three-and-outs.

It is very clear that Purdue needs to get drastically better if it is even going to win another game this year. I would even go so far as saying Purdue needs to get better just to avoid getting blown out the rest of the way. Iowa and Michigan State look to have bad offenses as well, but at least the Spartans have a lights out defense to back them up. As it stands now, Purdue's defense will play well until it is worn down because the offense is doing very little, then get run off the field. One of its best players, Landon Feichter, is also now out for a long time with a broken leg to go with two broken hands.

It certainly does not look good for next week. When the team that was expected to be one of the worst in the Big Ten blew out the team that beat us 42-7 in week one (Illinois blasted Cincinnati 45-17)  that served only as a further blow to our esteem. Now we get to play a Notre Dame team that played for a national title last season. We're going to be on national television, and there is a more than strong chance things will get very, very ugly. If the Purdue team that has played the last two weeks shows up I fully expect to get shut out at home.

After gaining a lot of goodwill in the offseason the coaching staff has seen their stock fall drastically the last two weeks because Purdue has looked worse than it did at any time last year. It has its work cut out for it this week, because Purdue needs to look like a completely different team to avoid getting blown out at home by the Fighting Irish.

At least we have one new fan today: 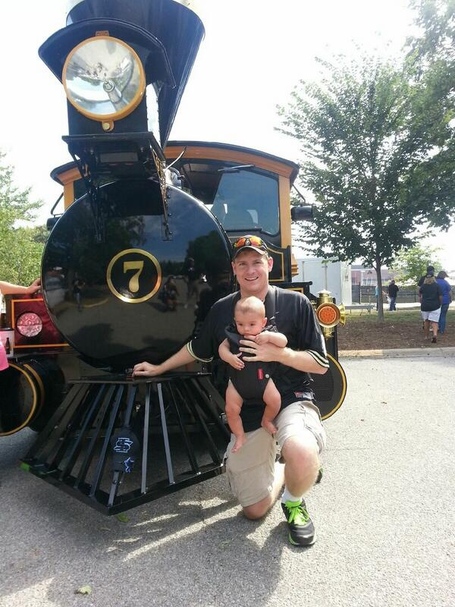