Purdue... what needs to change

We're making progress but we need to change our mindset.

Share All sharing options for: Purdue... what needs to change

While the result was not what any Purdue fan wanted the progress we displayed throughout the game is encouraging.There were many things that we could've done different and could've gotten us the W. There were still other things what went right. What went right though is not a guarantee that this game will turn our season around. 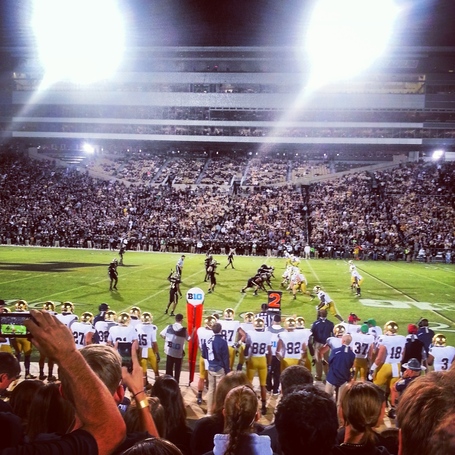 Look at last season; following our promising game against Notre Dame we lost five of the next six games. That said, I am more optimistic about the rest of the season than I was after last Saturday's game. I think we will still struggle against some teams but I think that is part of the process. We are in a transition period. As a program we are just getting our bearings and are beginning to gear up the future. That being said I don't think we should ignore this year's team. They are still important they can set the precedent for teams to come through working hard and playing selflessly. As fans we need to settle in, continue to support Coach Hazell, and cheer on our Boilers each game.

Our performance last night surprised me and many other fans. I heard many people say they were glad we played hard and didn't roll over. While our guys did play hard I don't think we should be satisfied with that. We should expect every single Purdue athlete on every team to play hard and give their best effort every time. We should be satisfied when we win. We should not be satisfied when we play hard. That should happen every time they compete. Hazell and his staff are holding the football team to a higher standard and as fans we should to. We're part of the culture at Purdue and if we are only pleased by effort and accept losses as good performances we're never going to win Conference titles, let alone National titles. How many Notre Dame football fans and IU basketball fans (typically they're one in the same) are content with a loss... not many. We shouldn't be either. ( I am in no way saying we should become as arrogant and irreverent as them)

I'm not happy we lost. There are times though when teams and individuals do try their hardest and they get beat (those are another thing); last night though was not one of those times. Our effort lapsed at times and that lead to our loss. Moving forward hopefully our guys will recognize what these lapses lead to and will work every day to make sure it doesn't happen again. And when, if, it does we should hold them accountable. Not being satisfied with their lacking performance but supporting them as they move forward to correct themselves.

It's a thin line between being happy about a game and not, but we can't keep fooling ourselves by thinking losses like last night are good for more than anything other than learning. I struggle with it myself. We're propping ourselves up on "fake accomplishments". The game was encouraging but nothing to be satisfied about. When we got W #2 I'll be happy. Until then... Boiler Up, Hammer Down, and Hail Purdue.