As before, the staff of Hammer & rails offers its predictions for This year's games.

It has been a good day. It is the first college colors day with my son, who was repping the Gold and black as he went off to ay care. The first Boilermaker Circle Tailgate was a rousing success as well with several thousand Purdue fans on the circle in downtown Indianapolis taking it all in. Here are a couple of pictures: 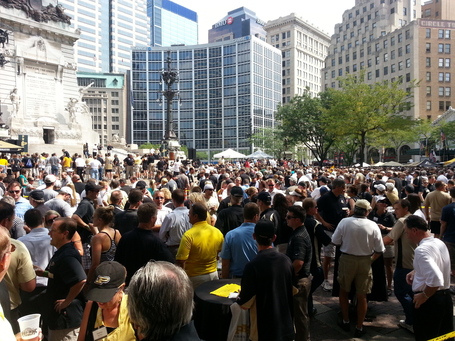 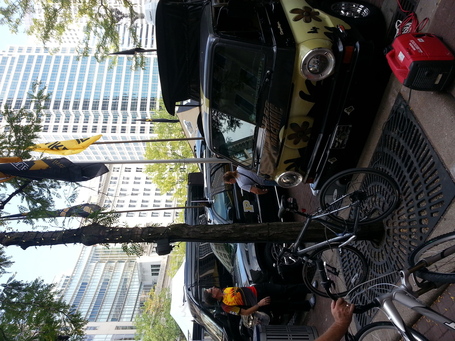 T-Mill: What else can really be said about this game? Purdue is a 10.5 point underdog on the road against a really good team, but has a lot of positive momentum that discipline issues left over after the Hope Era have been cleaned up. I am honestly not sure what to expect. A 200 yard, 3 TD game from Akeem Hunt? Sure. Rob Henry throws four interceptions? Yeah, could happen. Cincinnati wins in a blowout, dashing Purdue's hopes for a quick turnaround? Yeah. Purdue coming out focused, disciplined, and sharp on its way to an easy win and a 9-3 season? Wouldn't shock me.

What I want to see most of all is a competitive team that doesn't make the same mistakes that we dealt with for four years under Danny Hope. I am talking about dumb penalties, missed assignments, missed blocks, and turnovers. That was the biggest struggle for Hope's teams. They always shot themselves in the foot. I want to see a game that is competitive and Purdue at least has a chance to win in the fourth quarter.

I do have a good feeling, however, and I think we're going to surprise some people. Purdue 27, Cincinnati 24

Okay, looks like I am not completely done with Hammer and Rails since T-Mill asked me to write at prediction as "Author Emeritus" (which sounds pretty cool. Then again, the word Emeritus is pretty bad ass). Anyway, I am required to hate Cincinnati. I once lived in Oxford, Ohio for a few years and my sister went to The Miami University as well. Ergo, you could consider me a Miami fan, so Screw You Cincy!
With both teams debuting new coaches, it is kind of hard to tell how these teams will play. That being said, I think that Cincy will come out to a fast start in front of the home crowd, and I wouldn't be surprised if they take a 2 TD lead. But I think Hazell's squad will make a strong comeback in the latter half of the game, maybe even retake the lead, but Cincy will take over at the end and put the Boilers away in the 4th quarter. Despite the loss, the Boilers will show a lot of potential in this game and will have many things to build off of for the rest of the season.
Purdue: 30, Cincinnati: 40

Thomas Chapman: Maybe I'm letting my optimism for the kickoff of the Hazell Era get in the way of things like numbers and rosters, but I think Purdue wins at Nippert. At minimum I'd expect the Boilers to cover as a 10.5 point underdog. Purdue 28, Cincinnati 21