Purdue is still in the running for one of the most accomplished prep players in some time to come out of the state of Indiana. If Park Tudor wins the Class 2A state championship this coming season 2014 target Trevon Bluiett will join a very exclusive club of players that won three state championships in his four high school years. It has only been done four times before:

The last two came under the evil that is Class basketball in Indiana, and three 2A titles in four years is not as big of an accomplishment as what Conley and Oden did in 4A. It is still quite impressive, however. Recently, Bluiett narrowed his list down to seven schools:

The 6-6 Bluiett, ranked as the No. 46 prospect nationally in the 2014 class by Rivals.com, named Arizona, Butler, Indiana, Michigan, Purdue, UCLA and Xavier as the seven schools he will target from now until he makes a decision. Bluiett plans to sign in November, during the early signing period.

As you see, Purdue made the cut. This would be a very big get because he is a player that has been a winner his entire career. As a freshman he was the best player on the floor when Park Tudor beat an undefeated Hammond Noll for the 2A title 43-42. he has gotten better every season and offers Purdue a true scorer as a 2 guard. He could also play the three if necessary in a three-guard lineup.

Let's look at each school and possible links:

Purdue - We offer him the chance to stay in-state and play immediately. There are plenty of twos and threes that will be on the roster. Let's look at the scholly grid for a moment: 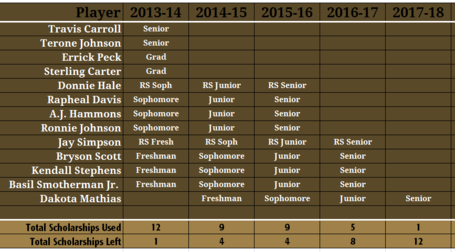 As you see, Purdue already has a plethora of guards and threes in Rapheal Davis, Ronnie Johnson, Bryson Scott, Basil Smotherman, Kendall Stephens, and Dakota Mathias. Where does he take minutes from those six, especially since all of them have at least two years remaining by the time he arrives?

Butler - If you want to stay closer to home and you play at Park Tudor it does not get any closer than Butler. The Bulldogs are now a high major program and that is the flagship in the state in terms of recent national success. The loss of Brad Stevens was huge, but we have seen them plug and play coaches before and keep the train rolling. Remember. They were supposed to get worse after Todd Lickliter left for Iowa and put Stevens in charge.

Indiana - The Hoosiers have the lure of two teammates that he won those first two state titles with in Paul Bayt (transferring in from Manhattan) and Kevin Ferrell. Those are positives that no other school can match on this list.

Michigan - What is with John Beilein coming down here and stealing the best players from Indiana? It used to be that Indiana and Purdue locked the state's borders down on the best talent. Not any more. Bluiett is likely close with Zak Irvin and Andrew Dakich as local guys that have headed up to Ann Arbor and he can talk to for advice.

Xavier - The Musketeers are roughly in the same boat as Butler without the Final Fours. They moved to the new Big East and they have a recent history of being a very difficult out in March. The have five Sweet 16 appearances since 2004 and four since 2008. Bluiett could see that as an opportunity to be a player that gets them over the hump.

Arizona - They are a recent addition to the race and one of just two schools that is outside the Midwest. They made the cut despite offering only as recently as this week.

UCLA - Many people consider this team as the front-runner because Ed Schilling, his high school coach, was hired by Steve Alford to be an assistant. Schilling has worked with Bluiett since the sixth grade, so they definitely have a connection.

I have long said Purdue was a longshot to get Bluiett, but it appears we are not out of the running yet. We will know over the next three and a half months.