Purdue has added a surprising second Graduate Transfer in Sterling Carter from the University of Seattle.

I was just about to go to lunch when some surprising Purdue basketball news broke concerning a second graduate transfer. Sterling Carter, a 6' 200 pound guard from the University of Seattle announced that he would spend his final season of eligibility at Purdue. He did graduate from Seattle so he will be immediately eligible at Purdue. I didn't even know we were on this guy's radar (even though he follows me on Twitter, so hi, Sterling!), so let's get some basic information before we welcome him.

Say hello to @sportycarter10, the newest fifth-year transfer to #Purdue. Talented scoring guard will give the Boilers a boost.

Carter originally enrolled at the University of the Pacific before transferring after just one season. He did not play in his only season at Pacific, so he was immediately eligible at Seattle. In 2010-11 he averaged 13.8 points, 3.3 rebounds, and 1.9 assists as Seattle went 11-20 as a transitional independent in moving up to Division I. In 2011-12 Seattle was a little better at 12-15, but still lacked a conference. They finished by winning six of their final seven games, but Carter's averages dropped to 10.1-3.3-1.3.

This past season was Carter's worst at the D1 level as he dropped to just 7.3 points and 2.6 rebounds per game. He only played an average of 18.6 minutes and shot a career worst 31.7% from the field. It is a bit of a mystery as to why he left Seattle:

Sterling "Sporty" Carter made it very clear to me that he did not quit the Seattle  University basketball team two days ago, but that he was released.

The junior guard, expected to be a top scorer for the Redhawks this  year, hadn’t played in the last four games.

Based on the above, it’s pretty clear that the marriage between Sporty  and Seattle U was not working out.

And it’s also evident that the decision to set Sporty free was made by  the Seattle coaching staff. Back in December, the Redhawks eked out a  close win at Eastern Washington and Sporty was not in the lineup for the first time. When  I asked Coach Dollar why, he said it wasn’t injury-related, and that  he was "just looking at different rotations."

What, then, is the cause of the Sterling Carter saga?

It sounds like it’s basketball-related, from everything I’ve heard. It  might be as simple as the fact that Sporty had an itchy trigger finger  on his shot, and that Dollar didn’t think that fit in with Seattle’s  style of play.

Well, those sound like a ton of red flags on a team that struggled to score points and shoot the basketball last season in Purdue. The rest of the article raves about Carter's talent, but state he was benched for a lot of games because he did not "fit with the system". He was allegedly Seattle's most talented player, but was benched on an 8-22 team that was just 3-15 in the first year of the WAC. It is a curious decision to say the least.

Carter could definitely have a role at Purdue if he buys into coach Painter's system. He is a good three-point shooter that was 39% from long range last year. For his career he is 170 of 462 for a near 37% average. He did not play after a 75-48 win over Northern Illinois on December 19 of last season, so he sat more than half the season.

Despite the red flags, this is the type of shooter Purdue needs. He is a guy that can come in off the bench and fill it up from long range. In his second to last game last year he was 6 of 7 from long range for 20 points in a 91-82 loss to Jackson State. 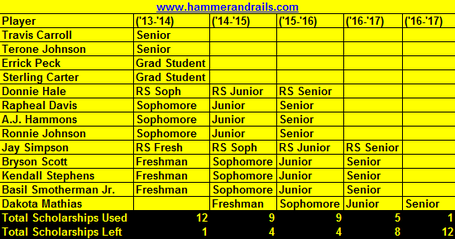 This leaves Purdue with only one open scholarship left for the 2013-14 season, as well as four "seniors" now in Errick Peck, Terone Johnson, and Travis Carroll.

We have a shooter!