Share All sharing options for: Boilermakings Has Very Low Expectations

Any season where Purdue is picked to lose to Indiana in football should be considered a bad one. That is exactly what USA Today expects, as Purdue falls to No. 89 nationally in their preview of every FBS team in the nation. They have very low expectations for year one under Darrell Hazell, so I guess we will have to prove them wrong.

College football countdown | No. 89: Purdue
New Purdue coach Darrell Hazell will look to build the program from the bottom up.

Joe Rocchio (left of Painter in this photo) has been offered a position as basketball manager by Matt Painter. Joe is an incoming freshman from Westfield. he is also the 2013 recipient of the Spirit of Sport Award from St. Vincent Sports Performance. 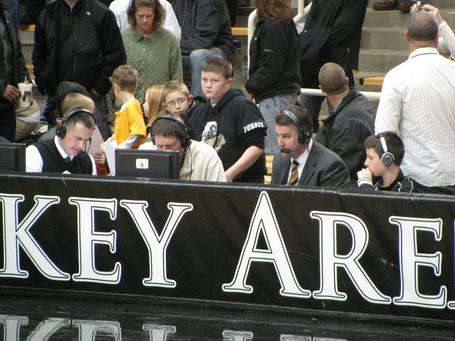 The existential questions surrounding Northwestern baseball - Sippin' On Purple
Why spend money on a program so futile? Because we produce a modest, but fair, number of Major Leaguers.

Indiana Baseball Takes on Mississippi St. In Game Two of the College World Series - The Crimson Quarry
Indiana is in a showdown to advance in the winners bracket with MSU. Hoosiers fans need to be feeling confident about those chances.

Are Husker Fans Excessively Pessimistic About Nebraska Football in 2013? - Corn Nation
There are many more reasons to be optimistic than pessimistic. Doesn't mean there aren't concerns. The defense can't give up 70 again. But there are reasons to look forward to 2013.

Michael Chandler Visits Purdue | ZagsBlog.com
Looks like Chandler could be an interesting addition if he comes to Purdue.

Hummel's pro basketball future remains in limbo | Journal and Courier | jconline.com
Robbie Hummel wishes he could glance into a crystal ball and see the near future, but until after the NBA draft on June 27, the former Purdue standout's professional basketball career is in limbo.

ASU, Notre Dame reach deal to keep 2014 football game
Apparently we were being shopped by Notre Dame for a 2014 game at Arizona State.

B1G Bold Predictions - Off Tackle Empire
Five OTE writers edge their way out onto the limb of June predictions for fall football, leaving no school's stone unturned in the quest to call the action in 2013 and beyond.

IU, Purdue supercomputers face off in rankings | Indianapolis Star | indystar.com
It was supposed to be the country's fastest university-owned supercomputer. Suck it, Big Red II!