There is an entire host of gods around the Big Ten.

As Big Ten bloggers we are a motly bunch. John M. over a Crimson Quarry, before handing the site over to JustAJ, was probably the most serious of us, publishing straight facts with and well-supported opinions. Then you have Black Heart Gold Pants, which has an actual site category called Batshit Insanity.

It makes things a lot of fun, especially when one of us comes up with an idea that gains national traction. BHGP did just that with Angry Iowa Running Back Hating God, which is now recognized as an authentic diety with more followers world-wise than Zeus in his heyday.

Like Zeus, AIRBHG has an entire host of gods he is associated with, one for each team in the league. Let's meet them:

Indiana Hoosiers - Pan - After only two Big Ten titles in over 100 years of Big Ten football and the most losses ever for a major conference school there is no god for IU football. If there is, it is clearly the weakest one in the Pantheon. Might as well make it Pan, the goat-herding god because who is friggin' Greece worshipped Pan (aside from Goat-herders).

Illinois Fighting Illini - Red Grange - Did you know Red Grange played for Illinois? He was really, really good too! If you believe it, he was rated the greatest ICON in Big Ten history by BTN, which is amazing that an Illinois football player was that high. He was the Galloping Ghost, which is appropriate because any success by Illinois football seems as fleeting as a BCS season followed by a no bowl season.

Iowa Hawkeyes - AIRBHG - AIRBHG is a vengeful god as we have seen over the last several seasons. I do not tempt AIRBHG. He even has his own website. Clearly, AIRBHG is real.

Michigan State - AMSUOLHG - Much like AIRBHG, the angry god of Michigan State has targeted a specific position: Offensive line. My colleagues over at The Only Colors recently addressed the history of AMSUOLHG and what the future holds if you are an offensive lineman in East Lansing.

Minnesota Golden Gophers - Bacchus - Seems appropriate since Minnesota is the only school in the Big Ten that serves alcohol throughout its stadium. You need something to drink when your greatest days as a program are twice as old as an IU basketball banner and everyone else in the conference, even Indiana, has been to Pasadena since you have.

Nebraska Cornhuskers - Corn God - I will let Jon Rosenberg explain, because it is beautiful! 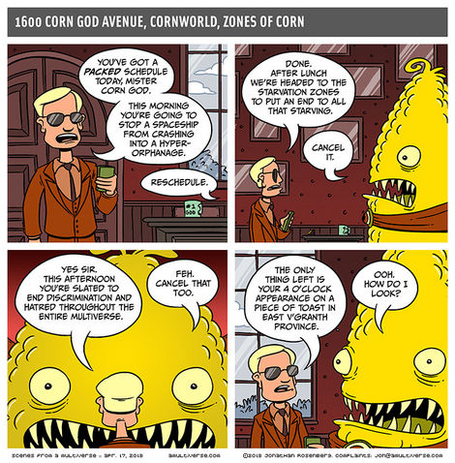 Northwestern Wildcats - Grimmace - Few schools have the manliness to admit that purple is their primary color, but Northwestern does. Since God is everywhere, that makes him amorphous. Therefore, Grimmace, the absolutely manifestation of purple, is perfect.

Ohio State Buckeyes - The Almighty Dollar - Cash Rules Everything Around Me 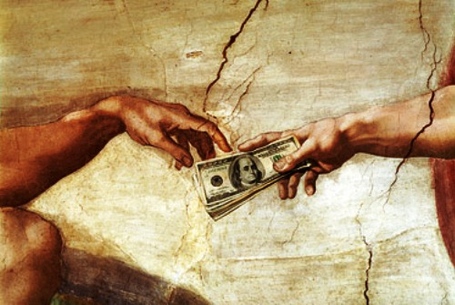 Penn State Nittany Lions - Lady Justice - Let's face it, Penn State football has A LOT to be sorry for and is hoping for leniency from the NCAA with its sanctions. Who knew we would be saying that two years ago?

Purdue Boilermakers - AACLHG - As you know, Angry ACL Hating God has been quite vengeful to Purdue across all sprts in recent years. When someone like Kara Patterson, a javelin thrower and Purdue alum, somehow tears her ACL before the 2012 Olympics you know things are bad.

Wisconsin Badgers - Aristaios - yes, there is actually a god of cheese-making. The Greeks thought of a God for everything!

Maryland Terripins - St. Francis - He is the patron saint of the poor and Maryland certainly could use him. Their athletic department is broke and they even want to be fronted some of that phat Rotel and Barbasol money from BTN.

Rutgers Scarlet Knights - Flying Spaghetti Monster - With as stupid as their athletic department is with all these scandals they have to be worshipping something crazy. Why did we invite them into the Big Ten again? I think Gordon Gee is the perfect candidate for their new AD.