After just three season the Leaders and Legends are gone. Hidden int he news of the Boston Police Department kicking ass and taking names the Big Ten announced that the divisions of the 14-team Big Ten with Rutgers and Maryland are now set.

ESPN has stated that Purdue will be paired with the six Central Time Zone teams:

This creates an interesting position. With Indiana being in the other division the Old Oaken Bucket game could not be played in some years unless there is a protected rivalry, in which case Purdue would have its six divisional opponents, Indiana, and only one of the other six east teams. In this announcement the Indiana-Purdue game is the ONLY protected rivalry across the divisions. Given Indiana's long history of below average play that gives the Boilers a huge advantage.

When messing around on NCAA '12 the other day I was able to figure it out while giving each team a protected rivalry across the divisions: 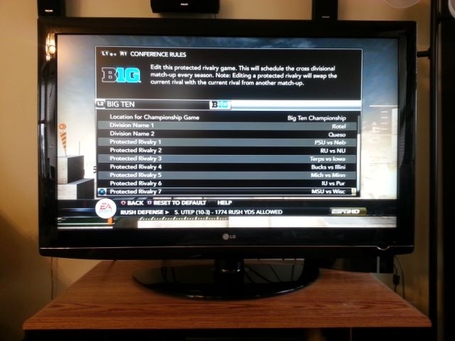 Maryland-Iowa = Someone has to be left over.

And yes, in the above picture the divisions are re-named Rotel and Queso

It was also announced earlier today that a 9-game conference season will likely start in 2016. That will help easy some of the cross-division stuff. In some years Purdue will have five home conference games and in other years it will have four. I am guessing that as long as the Notre Dame series is on the books Purdue will lobby to have their five-game years in season it plays at Notre Dame. In order to keep seven home games, however, It makes things tight on non-conference, non-Notre Dame road trips like the upcoming series with Nevada 2016 (at Purdue) and 2019 (at Nevada). Purdue's 2015 trip to Marshall in return for last year's game likely won't be affected, but future conference games after 2013 will be.

It certainly is not a bad thing that Purdue can go years without playing Michigan, Ohio State, or Penn State given the long-term history with them. Purdue has historically played much better against Illinois, Iowa, Northwestern, and Minnesota above or at least near .500 with those four. That leaves Nebraska (Purdue is 1-0 all-time) and Wisconsin (29-43-8, but Purdue has lost seven in a row and is 4-11-1 since 1991).

So that is the news. If Purdue improves as coach Hazell thinks they cane, starting in 2014 Purdue has a bit of an easier path to the Big Ten title game.