More On The Anthony Johnson Transfer

T-Mill weighs in with some thoughts on Little AJ leaving.

Share All sharing options for: More On The Anthony Johnson Transfer

AJ's departure makes Purdue and even younger team, and it is troubling to see so many guys bail after one troubling season. The Boilermakers now have only two upperclassmen on scholarship as you can see from the scholarship grid. Terone Johnson and Travis Carroll are the lone seniors next year, with no 2015 seniors unless you count walk-on Neal Beshears. 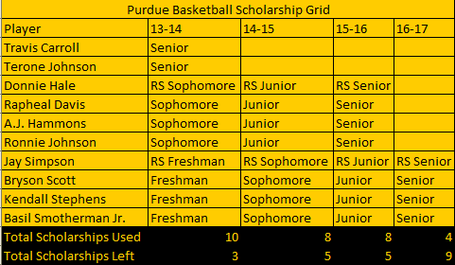 This likely means coach painter will go heavily after a JuCo transfer to get a two-year, ready-to-play player like Deshawn Delaney at Vincennes. Purdue now has three open scholarships for the 2013-14 season to use on a four-year, two-year, or graduate transfer. Painter should add one of each without impacting the loaded 2014 class that now has five open spots. The number of 2016 spots will be affected by how many four year players are added in 2014.

Unfortunately, transfers have become the norm under coach Painter. We've gotten used to saying goodbye to players, but at least there wasn't as big of a rash of them as a few years ago. I close with the list of players that have transferred before using all their eligibility under coach Painter: