For the second time this week Purdue loses an experienced player.

Much was made about Purdue being a very young team this past basketball season. It is now official that they will likely be even younger in 2013-14. earlier this evening it was announced that Jacob Lawson asked for his release and will not return for his junior season:

Lawson joins Sandi Marcius in leaving the program, but Lawson will have to sit out a season before he can play his final two years of eligibility elsewhere, possibly back in North Carolina somewhere close to his home.

This is not as much of a surprise as losing Marcius. While the Chooch came on strong at the end of the year, Lawson all but disappeared from the rotation by the end of the season. Early on he showed a midrange jumper and even played a season high 23 minutes against Villanova in New York. He last cracked 20 minutes when he played 22 minutes, scored 10 points, and had 7 rebounds in the Big Ten opening win over Illinois.

His numbers quickly fell off after that. He would only score nine points the rest of the season and play five minutes over the last six games. He had six DNP - coaches decisions in Big Ten play and saw guys like Donnie Hale and Rapheal Davis take his minutes.

There were also the cryptic comments about "needing more 12 month players" from coach Painter. Lawson was never named by name, but around the time those comments came out is when his minutes took a severe nosedive.

I wish Jacob the best in wherever he ends up. He'll always be a boilermaker because he has been a part of our family for two years now, so all we can do wish wish him them best.

As for what this means going forward is that Purdue now has two open scholarships going into the 2013-14 season. Since he will not be here for the 2014-15 season it means that Purdue now has a 4th scholarship for that loaded 2014 class. Purdue could add a 4-year player or a 2-year JuCo player without as much consequence plus a one-year transfer if one works out. There is certainly some flexibility. 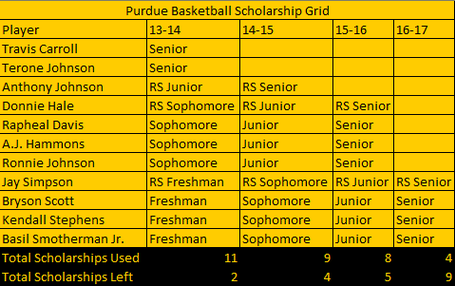 The addition of a one-year player could also be big because Purdue will only have Terone Johnson, Travis Carroll, and Anthony Johnson as players in the junior class eligibility or higher during the 2013-14 season. Neal Beshears will be a junior walk-on and will possibly take a scholarship if we have an open one when the season starts. The addition of a one-year player could provide some valuable upper class leadership.

Whatever happens, Purdue has options. In the meantime, good luck, Jacob.