What The Sandi Marcius Transfer Means For Purdue Scholarships

Purdue now has an open scholarship for the 2013-14 season.

Share All sharing options for: What The Sandi Marcius Transfer Means For Purdue Scholarships

As you no doubt know by now, Sandi Marcius has left the Purdue basketball program. The Senior-to-be will graduate this year and is eligible to transfer and play his final year of eligibility at another school immediately, just as John Hart did last season. It is unfortunate, as the Chooch really came on late in the 2012-13 season and it was hoped he could pair with A.J. Hammons to have two pretty good true centers next year.

I wish him well, wherever he lands, however. He'll soon have a Purdue degree and will always be part of the Boilermaker family. His departure does open up a scholarship for next season, however. Here is the updated Purdue scholarship grid: 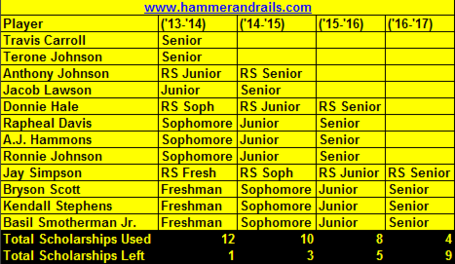 Coach Painter has a few options for the open spot:

Sign a graduate transfer to slide into the open scholarship for one year:

This may be one of the best options and Purdue has tried it the last few seasons when it went after Julius Mays and Brandon Wood. It keeps three spots open for a 2014 class that is loaded with talent in Indiana and should have as many players as we can get. There are some good options. CBS has published a list of transferring players dated April 4th, and here are the ones that would be immediately eligible as graduates with a year left:

That's it for now, but there could be more. Of those players I like Kromah, Granberry, and Davis the best.

Davis is a 6'8" power forward that averaged 17.6 points per game last year and has shot the three just a little in his career at 36.7%.

Finally, Granberry layed in only five games this past season because of injury but averaged 10.6 for his career as a 6'5" 225 pound guard. He is 35% from three for his career.

We have some familiarity with Granberry as well. He played for North Florida when Purdue beat them 77-57 at Mackey Arena on December 11, 2010. He had a solid 14 points and three rebounds in that game as sophomore. He played in five games this season, but walked away and gets his final year of eligibility back due to the death of his father.

There are some options out there to go and grab another player that will be here for four years, but that knocks the number of available scholarships for the 2014 class down to two with the departure of only Travis Carroll and Terone Johnson after next season (assuming no other departures). it also gives Purdue nine players next season with at least 3 years of eligibility remaining, so we would still be an extremely young team.

Here are some of the players that could draw some interest:

Darryl Baker - Jeffersonville, IN - The 6'2" shooting guard has recently gotten some looks from Xavier, Ohio State, Louisville, and Butler after a solid senior season that saw him take Jeffersonville to a 24-4 record and as far as the semi-state before losing to Cathedral. He has flown under the radar a little, but could be a steal.

Austin Karazsia - Linton, IN - I wrote about this kid a few weeks ago, but now we have room for him. There is nothing wrong with bringing in a smart, 6'8" kid that can shoot.

Alex Foster - Chicago, IL - This is the hot rumor of late and the 6'8" 200 pound forward from Seton Academy is back on the market after Tubby Smith was fired at Minnesota. Purdue offered him before he committed and signed with the Golden Gophers, but with Tubby gone his commitment can re-open.

Alvin Ellis - Chicago, IL - This 6'5" guard is also a possibility and would give Purdue another big perimeter player to go with basil Smotherman.

We haven't gone this route in a long time, not since getting Chris Reid as a practice body and Nemanja Calasan as an emergency big man. Calasan was good for two years. Carl Landry transferred to Purdue from Vincennes and after paying some ACL dues now has a successful NBA career out of it. Reid was essentially a body for practice, so you can see this route can be hit or miss.

Deshawn Delaney - 6'5" guard, Vincennes - he averaged 15.8 points for Vincennes as they reached the JuCo Final Four. He also grabbed 8.1 rebounds per game.

If this happens, well, congratulations to Neal Beshears for being on scholarship like Dru Anthrop was last year.