Purdue loses 3 straight after an opening weekend win against Samford.

Share All sharing options for: Boilers fall to 3-5 on the season after 4 games in Starkville

This week was an extremely short one for the team. We got back from Florida at 2:30 a.m. on Sunday and had to leave campus at 2:30 p.m. on Wednesday afternoon to bus to Starkville, Mississippi for the Diamond Classic. West Lafayette to Starkville is a 640 mile trip, about 10 ½ hours.

Luckily on the way there we spent the night in Dickson, Tennessee and drove the rest of the way to Starkville on Thursday afternoon. We had an evening practice then went to dinner at a fantastic barbecue joint called The Little Dooey. Everyone here was extremely friendly…gotta love that southern hospitality.

Friday afternoon featured a doubleheader for the Boilermakers; game one against Samford, and game two against the home team #5 Mississippi State Bulldogs. RS junior Brad Schreiber took the mound for the Boilermakers, and turned in a quality start – throwing 6 innings and giving up 3 runs off of 3 hits.

The game was scoreless through the first 4 innings, until Purdue scraped a run across in the top of the 5th inning after Hansen and Krieg hit back to back singles, and Samford’s pitcher balked Hansen in for the first run of the game.

A wild pitch by Schreiber in the bottom of the inning knotted the score again at 1, and 2 more runs by Samford in the bottom of the 7th gave them a 3-2 lead heading into the 8th inning. The Boilermakers finally broke through in the 8th, scoring 5 runs off of 6 singles in the inning. Purdue tacked on 2 more runs in the top of the 9th to beat Samford 9-4 and improve to 3-2 on the season.

This game was a tale of two completely different teams. Mississippi State is typically known for their arms in the bullpen, while the Boilermakers are known for their bats – as seen last year when Purdue was consistently in the top 10 in the nation in batting average .

Mississippi State was dead last in the SEC in batting average, but their #1 pitcher last year was drafted 22nd overall to the San Francisco Giants. The Bulldogs hadn't really faced any real competition yet on the season - beating Portland in a weekend series, and winning a midweek game against Grambling State.

This game was nearly identical to the first game against Samford, except it was scoreless through the first 5 innings. Freshman LHP Jordan Minch found his groove – a complete turnaround from last weekend’s start against USF - and struck out 5 Bulldogs in 6 innings while giving up just 1 run. Both teams scored 1 run in the 6th inning – Purdue on a fielder’s choice with the bases loaded, and Mississippi State on a lead off home run by Hunter Renfroe.

Mississippi State also scored 1 run in each of the next 2 innings from 2 consecutive HBP in the 7th, and a sac fly in the bottom of the 8th which would ultimately be the ball game. The Boilermakers put up a great fight, but ultimately fell 3-2 to the Bulldogs. Both teams had 5 hits on the day.

There was also a 90 minute rain delay in the middle of the 7th inning. Both teams sent players out on the field tarp to do a little slip-n-slide, and there was a even a dance off which can be seen here:

Today was a long day, being that team breakfast was at 9, and we weren't scheduled to leave for the field until 4 p.m. A lot of guys got a workout or jog in around campus – I went for a run by the football stadium which unfortunately was under construction but there was a gate still left open so I was still able to check it out.

The team took batting practice inside the Palmeiro center, which is Mississippi State’s indoor half football/half baseball turf facility we used to practice for the weekend (also referred to as "the house that steroids built").

P.S. those are not my words; they were words of the camera man I was sitting next to in the press box.

Mississippi State televises all of their baseball games, and the TV crew was generous enough to make me a DVD copy of the game, so I took advantage of this by heading out to the dreaded and famous "Left Field Lounge" to hang out and watch the game with the die-hards.

They even have a twitter account (@NLeftFieldToday) which they use to spill info on opposing outfielders that fans can use to yell obnoxious things at the players. Here's a pic of the Left Field Lounge: 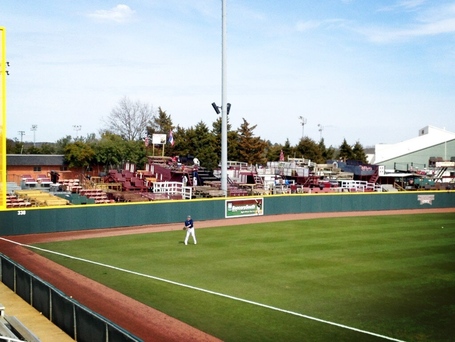 I met up with the student who ran the account, and he introduced me to his party of people and offered me some food. Although we were enemies on the field, they were very accommodating and genuinely nice fans who appreciated good baseball.

Purdue ended up taking another 1-run loss to Mississippi State, falling to 3-4 on the season, while the Bulldogs improved to 8-0. The Boilers had a 5-2 lead after 5 1/2 innings, but the Bulldogs put up 2 runs in the 5th and 3 runs in the 6th to take a 7-5 lead. Purdue got one run back on the 9th, but it wasn't enough to take the victory.

Kyle Wood hit a solo shot in the 5th for the Boilermaker's 2nd home run of the season. He also had a chance to tie the game in the 9th....with a runner on 3rd and 2 outs he smoked a line drive up the middle but it was stopped by the MSU pitcher to end the game.

Samford struck first in the 2nd meeting between the two teams after a 3-run second inning. Purdue LHP Kyle Wood exited the game after throwing just 1 1/3 innings to start the game. The Boilermakers had bases loaded and 1 out in the bottom of the 3rd inning, but failed to score any runs.

The Boilermakers finally got on the board in the bottom of the 7th after a lead off single, walk, hit by pitch, and wild pitch scored Jack Amaro. After Sean McHugh singled in another run, Samford's pitcher threw his 2nd wild pitch to score the 3rd run of the inning for Purdue and tie the game up.

Samford was able to score runs 3 more runs in the top of the 8th after loading the bases with 1 out, and the Boilermakers weren't able to recover. Samford's pitching staff combined for 9 strikeouts on the day.