Well, Purdue didn't lose to Maryland Eastern Shore tonight, nor did it lose any players to injuries. That's what is important in a game like this. Did the Boilers play perfect? Far from it, yet they still won by nearly 30 points.

This was Maryland Eastern Shore's 20th consecutive loss on the road, which says plenty. That UMES's two wins this season (a seven point win over Mount Saint Mary's and a drubbing of Salisbury University) already tied their win count from last season says even more.

Purdue beat a UMES team tonight that played at Oregon State Sunday, losing 98-66. Earlier this season the Hawks lost to the Hawkeyes of Iowa 109-63. Tonight the Hawks didn't even have their leading scorer, Hakeem Baxter, who had his hand in a cast after injuring it Sunday.

So again, Purdue came away from this game with no injuries and a W. That's good enough for me.

This wasn't a test of how Purdue could rebound from Saturday's painful loss to Butler. It wasn't a test to see if a team that played 38 minutes of basketball this weekend looking like it didn't give a care as to if it won or loss would suddenly regain that fire and want to compete.

This was a game where a big school bought a win from a tiny school. That simple.

Purdue started a new lineup for the sixth straight game, going with Bryson Scott, Ronnie Johnson and Terone Johnson all on the court with Basil Smotherman and Jay Simpson. That lineup propelled Purdue on a 14-0 run after UMES hit a 3 on its first possession. From there, the Boilers' lead was never in doubt.

Purdue did shoot quite well on the night, going 8-for-16 from long-range, including an impressive 3-of-4 from Terone Johnson. Sterling Carter added two more on 66-percent from deep.

The Boilers also were impressive from the foul line, hitting 13-of-16.

Heck, even Stephen Toyra made Hawks coach Frankie Williams look like this a few times: 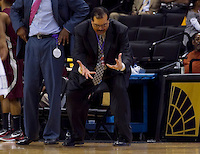