Purdue continues to show no improvement as the 2013 season drags on.

Share All sharing options for: Iowa 38, Purdue 14: More Of The Same

We have seen the script that played out today in Ross-Ade Stadium before. The defense plays strong for most of a half, but gets no help from the offense. A special Teams mistake, in this case a muffed punt by the Hawkeyes, set up Purdue's first visit to the Red Zone since September 28. At least it was a productive one, as Kurt Freytag caught a two-yard TD pass from Danny Etling.

After giving up a late first half touchdown after that drive the Boilers got a stop and was actually driving in the third quarter, hoping to tie the game. The Boilers had actually earned three first downs on a drive and was well on its way to a fourth with a big run by Raheem Mostert, but just before going down, he fumbled.

That was basically the moment that Purdue lost the game. Christian Kirksey recovered the fumble the Hawkeyes marched down the field for a touchdown despite fumbling twice on their own. Jordan Canzeri fumbled two plays later, but it was recovered Don Shumpert and the Hawkeyes scored seven plays later on a run by Mark Weisman.

Instead of potentially tying the game at 14 late in the third quarter and actually having a competitive game Purdue trailed 21-14. They would give up 17 more points, mostly because of an Iowa offensive line that broke Purdue's will on defense and paved the way for 318 yards rushing. Canzeri had 165 yards and a score, Damon Bullock had 85 yards, and Weisman had another 30 and a score. The run was there all day, as Iowa linemen put on a clinic of how to run block and open a hole. The Iowa backs hit those holes and were often 5-10 yards down field before first contact.

It has been the same all year. I continue to be baffled as to why the seniors on the offensive line keep playing. There is no point for it at this point. They are not helping Etling develop, they have not earned the right to go out on the field with dismal play, and they are certainly not helping Purdue win games. It is pretty clear that the offensive line is the biggest impediment to the team, as it can't keep the offense on the field and allow the defense to rest. The defense then wilts as the game goes on and you have what happened today where the second worst offense in the conference easily gained 500 yards and scored 38 points. It was so bad that we can't even spell correctly ON OUR OWN SCOREBOARD: 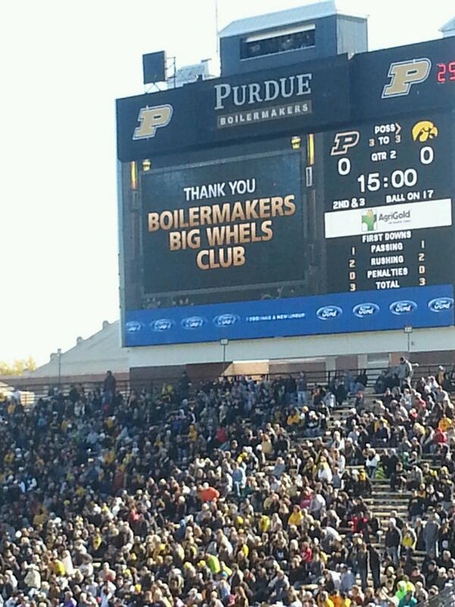 I don't think it can get much worse for Purdue right now. We're not seeing improvement. The only reason that we finally got into the red zone after 201 plays is more because Iowa screwed up with the punt than anything we did. The late touchdown from Austin Appleby (who looked good in his first career action) to Danny Anthrop was very much like the DeAngelo Yancey TD vs. Nebraska.

I really can't see Purdue winning a game the rest of the season. This is the first time I have admitted it to myself. Even if the defense plays like it did at Michigan State, which is the best it played all year, the offense is simply incapable of moving the football or scoring points. As things stand, Purdue needs to score 44 points in its final three games just to tie the Northwestern 1981 record for Big Ten offensive futility. When it has only scored 31 points in five Big Ten games I have my doubts.

There simply aren't many positives right now outside of Cody Webster punting as one of the best in the nation. For most of these games it looks as if Purdue doesn't even have players that would be third teamers on most Big Ten teams. The talent gap is so big I question if we even have 10 Big Ten caliber players anywhere on the roster.

I think you also have to question the coaching staff, because there are many of the same players on this year's roster as there were last year. That team still won 6 games and at least could move the ball or score occasionally against everyone else. This team can barely get over the 50 and defensively it cannot cover receivers or stop runs. Purdue looks totally overmatched in every aspect of the game. I don't understand how guys who could at least be competitive with two of the best teams in the nation last year could look so bad this year. We only lost a single player to the NFL in Kawann Short too, so it's not like a ton of talent walked out the door.

Purdue has three games left to show any kind of improvement, including one against a team that will likely enter on a 20-game Big Ten losing streak and another with the worst defense in the Big Ten. I have very little confidence that we can see improvement even against that slate.