Boilermakers in the NFL: Week 9

How did past Boilers perform in the ninth week?

Share All sharing options for: Boilermakers in the NFL: Week 9

DE Cliff Avril @cliffavril (Seahawks) - Avril went half in on a sack with Bobby Wagner, moving his season total to 4.5 sacks on the year. He also had four tackles in the Seahawks win and sits at second on the team in sacks.

QB Drew Brees @drewbrees (Saints) - The Saints have lost two of their last three, falling to the Jets on Sunday. Brees threw for 382 yards but had to throw the ball 51 times, picking up a pair of touchdowns and interceptions. Brees sits at second in the league in passing yards and touchdowns, trailing only Peyton Manning. He also sits behind Manning for the league lead in commercial appearances.

C Nick Hardwick @hardwina (Chargers) - The Chargers went for 69 yards on the ground and Philip Rivers was sacked once.

You might have noticed an increase in child molesty mustaches walking the streets this month, and if you aren't aware by now, November has unofficially come to be known as Movember or No Shave November. Kerrigan is growing out the lip lettuce this month in support of testicular and prostate cancer awareness and you can check out his campaign here. Every time the hashtag #MadeMoRyan is used on Twitter, Made Man will donate $1 to the Movember Foundation on behalf of Kerrigan.

LB Mike Neal @mneal96 (Packers) - Neal had seven tackles Sunday but still showed some growing pains while adapting to his new role at linebacker. Neal failed to wrap up Josh McCown in the backfield early in the first quarter, a play that ended with McCown throwing a touchdown to Brandon Marshall.

Neal took some of the criticism about his play personally, but later deleted and backed off his tweet.

DE Rob Ninkovich (Patriots) - Ninkovich left the Patriots game with a foot injury but was optimistic that the injury wasn't too serious. The Patriots have a bye week coming up, so chances are there won't be much info on his injury from the normally secretive Pats until next Thursday. He did have five tackles and a strip sack before his third quarter exit.

G Uche Nwaneri @Chuckwu77 (Jaguars) - The Jaguars did not lose for the first time this year thanks to their Week 9 bye.

QB Kyle Orton (Cowboys) - Orton wasn't moved at the trade deadline by the Cowboys, but with an injury to Aaron Rodgers this week, the Cowboys have to feel pretty good with Romo's insurance policy. Here is ESPNDallas reporter Todd Archer on why the Cowboys value him so highly.

T Michael Otto @amishwizard66 (Titans) - Otto got the start at right tackle for the injured David Stewart, his sixth career start. Otto appeared to have some trouble, giving up a sack and five hurries, but Stewart hadn't been faring too well himself up to this point.

DB Bernard Pollard @Crushboy31 (Titans) - Pollard had six tackles and a pass deflection. He leads the Titans in tackles with 53.

HB Kory Sheets @Sheets24K (Saskatchewan Roughriders) - Sheets was named a CFL All-Star and the Roughriders nominee for Player of the Year this week but sat out Saturday's game as a precaution.

DT Kawann Short @kk_mr93 (Panthers) - I couldn't find any trace of Short in the box score, but he apparently did the "Lil' B Cooking Dance," so there must have been some reason for this based celebration. 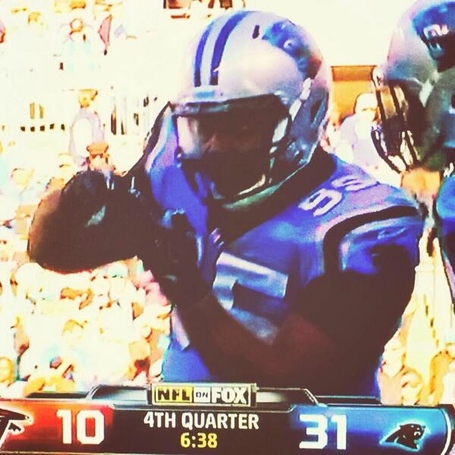