Boilermakers in the NFL: Week 11

Share All sharing options for: Boilermakers in the NFL: Week 11

DE Cliff Avril @cliffavril (Seahawks) - The Seahawks moved to an NFL best 10-1 and Avril picked up another sack and forced fumble to go along with two tackles and a pass deflection. Avril checks in tied at #19 in the NFL in sacks with 6.5 and now sits at five straight games with at least .5 sacks. He's also the only player in the NFL with 25+ sacks and 10 forced fumbles in the last three years.

QB Drew Brees @drewbrees (Saints) - Brees had 305 yards to go along with a touchdown and interception, helping the Saints move to 8-2 after Sunday's win against the 49ers.

By now you've probably seen the hit Brees took courtesy of Ahmad Brooks in the fourth quarter. Brees fumbled the ball on the play, but a controversial penalty negated the play and the Saints went on to win on a Garrett Hartley field goal as time expired.

Brooks wasn't happy about the call...

...while Brees said later when he saw the hit:

"I saw the replay, & it looked like I went go-go gadget neck. …You look like a crash-test dummy when that happens"

C Nick Hardwick @hardwina (Chargers) - The Chargers had another strong game on the ground, going for 154 yards on 26 carries. Nick Hardwick and Louis Vazquez remain the only offensive linemen in the NFL with more than 400 snaps without allowing a sack or quarterback hit. However the Chargers lost to the Dolphins and Hardwick missed five snaps as the result of a neck injury.

If you're in the DC area, you can have Kerrigan as a celeb waiter at Ruth's Chris Steakhouse on December 2 and help him raise money for his Ryan Kerrigan Blitz for the Better Foundation. 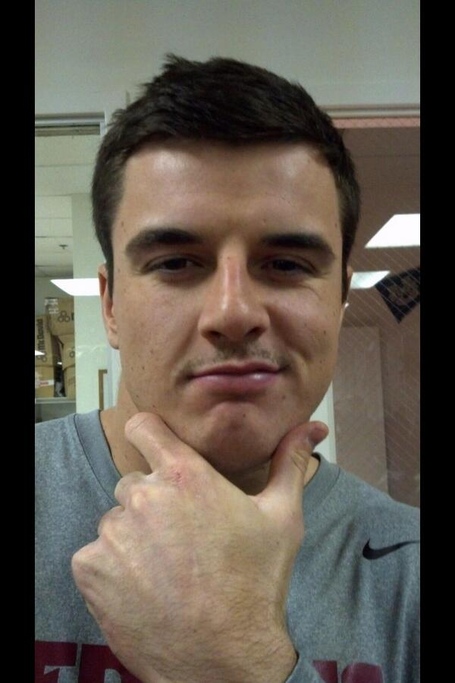 LB Mike Neal @mneal96 (Packers) - The Packers continue to struggle without Aaron Rodgers, but Neal did record two tackles and his second sack of the season.

DE Rob Ninkovich (Patriots) - Boilers had a big Monday night. Ninkovich led the Patriots with nine tackles and two sacks but he wasn't happy with the controversial no call on the last play of the Patriots' loss.

G Uche Nwaneri @Chuckwu77 (Jaguars) - Nwaneri is one of only two Jags to play every offensive snap in 2013.

T Michael Otto @amishwizard66 (Titans) - Prior to Thursday's game against the Colts, Otto had played in every game this year, including starting the last two. But Otto was inactive Thursday despite being absent from the injury report.

DE Shaun Phillips @ShaunPhillips95 (Broncos) - The Broncos handed the Chiefs their first loss of the year, in part thanks to 1.5 sacks from Phillips. It was his 19th career multiple sack game. He also had 10 tackles and is sixth in the NFL in sacks with nine.

DB Bernard Pollard @Crushboy31 (Titans) - Pollard had four tackles and still leads the team with 63 tackles. He also picked up another fine for a hit on Chad Henne in last week's loss. His latest blow cost him $15,750, bringing his season total to $67,750, which in normal people dollars is about $2000 (assuming normal people make $40k).

HB Kory Sheets @Sheets24K (Saskatchewan Roughriders) - Sheets and the Roughriders advanced to the CFL's Grey Cup in part to 177 yards on a season-high 28 carries. He was this week's CFL offensive player of the week.

DT Kawann Short @kk_mr93 (Panthers) - Short had two tackles in the Panthers' primetime victory over the Patriots, but his biggest play was forcing a Stevan Ridley fumble as the Patriots operated in the red zone.