It CAN Be Worse: Boilermaker Special Breaks Down

The beloved mascot of Purdue has suffered a mechanical breakdown on the way to Penn State.

Share All sharing options for: It CAN Be Worse: Boilermaker Special Breaks Down

It has been a long, trying football season, but this afternoon we learned it could get worse.

Never a dull moment with the @BMSVII...

The Boilermaker Special, as you know, travels to every Big Ten road game and almost every non-conference road game within reasonable driving distance. Paul Branham is a great friend of the blog and he happens to be one of the drivers of the Special with the Reamer Club. On the way to Penn State, the Special broke down near Columbus, Ohio: 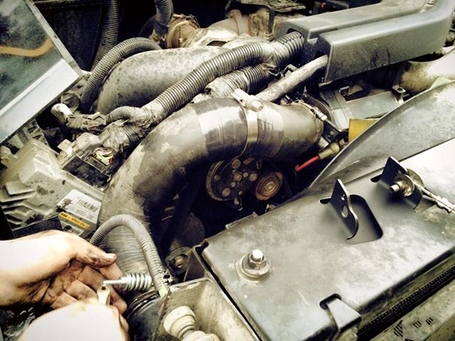 Busted charge air hose. No replacement parts anywhere in the greater Columbus area so we patched it with miracle weld tape and a clamp.

Calling a mechanic is really easy until they ask what the vehicle is going to look like so they can find it. "Well, uh... It's a train."

According to Paul they are near Zanesville, Ohio right now waiting on a diesel mechanic to help them out. It looks like they will be able to make it close to State College, but they still need help:

@HammerAndRails mechanic clamping it off but if we can get a more permanent solution in the Johnstown - State College area that'd be good.

So, if you're a Boiler (or a helpful Nittany Lion) in the Johnstown/State College area and can help the Special crew out, contact @boilerpaulie on Twitter. Our Mascot needs you.

And yes, it CAN get worse this football season.