Boilermakers in the NFL: Week 8

How did past Boilers perform in the eighth week?

Share All sharing options for: Boilermakers in the NFL: Week 8

Brees will be Brees? The Brees is back in town? Eh. Drew Brees had a good week.

DE Cliff Avril @cliffavril (Seahawks) - The Seahawks beat the Rams in this week's finale and Avril got to the Rams' stand-in Kellon Clemons for his third sack of the season.

QB Drew Brees @drewbrees (Saints) - Coming off the bye week, Brees had his strongest game of the season. The Saints beat the Bills 35-17 with Brees tossing a near perfect game, going for 332 yards and five touchdowns.

OT Dennis Kelly @DennisKelly67 (Eagles) - Eight games down and Kelly still hasn't made it into a game.

OLB Ryan Kerrigan @RyanKerrigan91 (Redskins) - Kerrigan had two tackles and a sack in the Redskins loss at Denver. His second half sack of Peyton Manning also forced a Manning fumble and put him at 9th in the NFL with 6.5 sacks.

LB Mike Neal @mneal96 (Packers) - Neal made a couple open field gaffes and still doesn't seem to have a firm grasp on being an every down linebacker. He finished Sunday's game with two tackles.

DE Rob Ninkovich (Patriots) - Ninkovich recovered a fumble in the Patriots win Sunday, bringing his total to 11 since joining the Patriots, good for first in the league. He also added 5 tackles and a sack.

G Uche Nwaneri @Chuckwu77 (Jaguars) - The Jags lost again, but Nwaneri picked up a prototype Google Glass while in London, so that's probably pretty high up on the list of Jacksonville accomplishments this year. 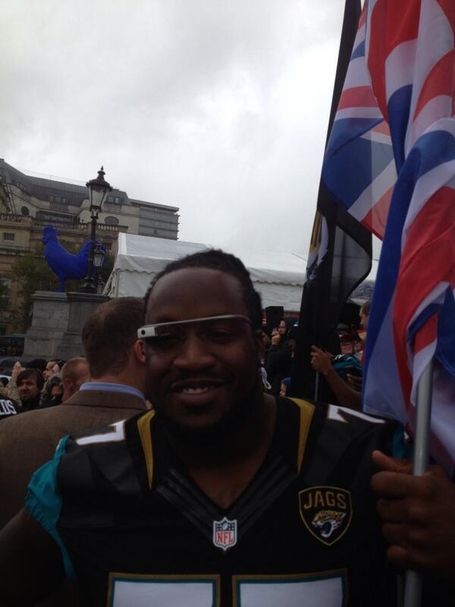 QB Kyle Orton (Cowboys) - Orton is still safe in Dallas but there's at least eight teams in the league who could use a quarterback. With the trade deadline today and not many rumors floating around, it looks like Orton will finish up this year in Dallas.

QB Curtis Painter (Giants) - The Giants are on a two game winning streak!

DE Shaun Phillips @ShaunPhillips95 (Broncos) - Phillips didn't get a sack this week and still sits at 6.5 on the season, but he did show some versatility and picked off a late Kirk Cousins' pass.

HB Kory Sheets @Sheets24K (Saskatchewan Roughriders) - Sheets' trash talk game is still on point, but Sheets only had 42 yards on 11 carries in the Roughriders loss and sits at second in the league in rushing heading into next week's regular season finale.

“Personally, he talks too much for me,’’ Stampeders linebacker Keon Raymond said when asked about the Saskatchewan Roughriders star, who contends that he is a superior ball-carrier to Calgary’s Jon Cornish.