Share All sharing options for: Purdue Women's Basketball: Everyone Stop Getting Sick!

Much as we hate it, sometimes real life gets in the way of basketball, and you have to work around it. From Gregg Popovich's DNP - Old for Tim Duncan to more serious issues like death of family or even Drey's life-threatening illness, you just have to play through. The last couple of weeks have had a similar feeling for the Purdue women, as a the flu has made extensive rounds through the team. More on that later, though, because the real story of this stretch has been: 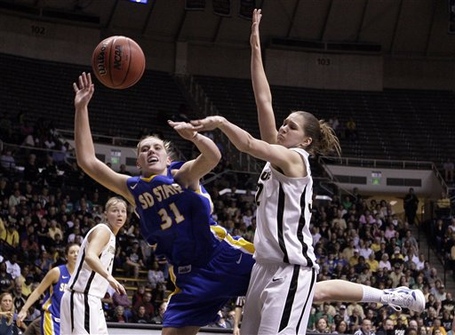 Sam is simply out of her mind this year. What do you do to top a 17-point, 19-board showing against Nebraska? You decide you like it and do it again, but this time for (*deep breath*) 22 points and 19 rebounds and 8 blocks and 3 assists and 3 steals (whew) in a 3OT thriller against OSU. She wasn't done, either. She tore up Minnesota to the tune of 19 points and 14 boards. She finally cooled off, along with everyone else, against Iowa, as she was battling foul trouble for much of the game and collected only 6 off the glass. She again double-doubled against Northwestern, recording 10 points and 16 rebounds. Tonight she again faced foul trouble against MSU, but chipped in 6 rebounds anyway despite also being sick with the flu. It's become clear this year that she is the heart and soul of this team. Her season lne now reads:

She's doing everything for this team right now, and she and KK are the emotional center of this team...which partially explains the Iowa game, as I'll talk about in a minute.

This was just a terrific game. Purdue held a decent lead for much of the game, but OSU was never really out of it, and you could sense the run coming. The chipped it down to a tie at the under 4 timeout, and the teams mirrored each other the rest of the way. OSU had the ball with 16 seconds to go, but KK and Courtney jammed up a dribble handoff on the inbounds play and came away with a steal.

The first OT was a grinder, as neither team found much offense, and it sputtered out with only 5 points each. OSU again had last shot, but Sam O blacked a layup and OSU could not score off the resulting scramble. The game should have ended in the next frame, though. After KK laid it in on the first possession, Purdue gave up an 8-0 run to put the score at 68-62 with 1:58 on the clock. That should have been it, but Moses got ahead of the field on the resulting inbounds and laid it in to breathe life into the game again. OSU missed two chances to extend the lead, and Ostarello (her again) was fouled on the second rebound. She nailed both FTs to bring it to two with 0:38 left. Then Courtney Moses happened. After blocking a layin attempt (all 5' 7" of her), she again jammed up an Ohio State inbounds play and took it all the way to tie the game.

The third OT was never in doubt, as the Boilers simply blew them away. Dee Dee hit a dagger from the corner (finally) as Purdue built an 8-point lead with under a minute to play, removing all doubt. Sam had a monster game as noted above, Moses and Mingo scored 24 and 17 for the game, respectively, and KK handed out 10 dimes to round out the effort.

This was a pretty ho-hum win, to be honest. Comfortable, but not dominating. Sam had another big game, recording 19 points, 14 boards, 2 assists, and a block. KK went back-to-back with 10-assist games. Courtney scored 18 to go with 6 assists of her own, and everyone produced about what was expected and needed to get the win.

Ugh. This was an eye-gouger of a game. Purdue started out 1 for 15 from the field and never really recovered, while Iowa was hot from 3. KK was battling the flu. She is the straw that stirs the drink, and without her, no one else did anything worthwhile either. Add in Ostarello getting into foul trouble, and the heart and soul of the team was gone. It was an awful, pathetic, burn-the-tape effort on all fronts.

Well, it wasn't quite THE flu game, but Moses came out simply unconscious on her way to scoring 26 points on 13 shots, despite taking her turn with the official team illness. Sam vacuumed up 16 boards and chipped in 10 points, while Houser played another good floor game with 7 assists and 4 steals. Manuel had another fine game in what's fast becoming a fine freshman season, pouring in 16 points in just 17 minutes. NW made a bit of a run late, but some cosmetic scoring very late on made it look closer than it was, as they never had the ball in a one-possession game.

Sometimes you simply out-shoot the other team, and nothing else matters. The Boilers won despite MSU taking an absurd 26 more shots, a product of their hilariously awful turnover problems today. They coughed it up 21 times to MSU's 6, turning what should have been a rout into a competitive game. Fortunately, every other aspect of their game today was on point. Drey bounced back in a big way with 22 points and 10 rebounds to lead the team in both categories, making up for another sick player, this time Sam. KK was the only other double-figure scorer, and she ran down 10 rebounds as well, despite (as usual) being the shortest player on the floor.

All that leaves Purdue at 6-1 in the Big Ten, looking up only at 7-0 Penn State. Everyone else is at least a game behind those two. Purdue next faces bottom-half IU on the 31st for the first time this season (6:30, BTN) before travelling to Penn State for what should be a de facto regular-season title game (Feb 4th, 7, ESPN2). Frankly, this is the game of the season. It's hard to imagine PSU giving up a two-game lead if the Boilers lose, and a win puts them level going into the favorably-scheduled stretch run.

As for the Big Dance, ESPN's somewhat-sketchy Bracketology has us as a 5 seed. Frankly, that's a crock, especially when he has Michigan listed as a 3 (laughable at best). To my mind, we're in low-3, high-4 range, with a lot dependent on the game at PSU.

So where does that leave us? Despite the hiccup @Iowa, it leaves us in the middle of a quite-successful season, one that's showing a lot of promise, and with all the key contributors functioning at a high-level. I'm excited to see what's next.