Boilermakings Is Proud To Unveil The New H&R Logo

Share All sharing options for: Boilermakings Is Proud To Unveil The New H&R Logo

As you may have heard me mention a few months ago, SB Nation is moving to a new format shortly called SB Nation United. Its intent is to, well, unite the individual team sites in a more streamlined manner with the rest of the network.

In the next month SB Nation will be undergoing a dramatic upgrade to our platform and our editorial process. There will be much more detail to come but for now, the new logo below is just a first taste of what is coming for Hammer & Rails 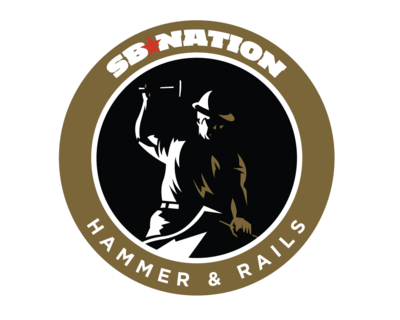 This is a small, but important sample of what is coming when our network undergoes its most exciting and radical transformation in the eight-year history of the company. A new visual identity here and across the network is only one step we are taking to unite our network of sites. United through individuality is the underlying theme of this project. You’ll notice that our team colors and the unique spirit of our individual community is maintained while making it clear to sports fans that each site is a part of the larger SB Nation network. We want everyone to know that they can find the same type of great writing, video and conversation that we offer here on all of our 350 plus sites. You can browse through all the new logos on a special page we put together at sbnation.com/united.

Our commitment to passionately follow our sports will never end. It’s what makes SB Nation a special place and that will only be enhanced by these new changes. In the meantime we’re setting up additions to our store so you can be sporting the latest and greatest before it even launches. Welcome to our future.

Now, onto the day's links:

The Panic Switch: BCS Teams Who Have Had Troubles With FCS Opponents - Bucky's 5th Quarter
This is basically Wisconsin fans saying, "It will be okay!"

A brief break for some off-season basketball wonkery - The Crimson Quarry
Crimson Quarry does an off the cuff Big Ten prediction for 2012-13.

Big Ten Preview: Week 2 - Black Shoe Diaries
A preview of the 9/8/2012 games going on in the Big Ten Conference.

Mid-Week Notre Dame Defense Analysis - Notre Dame Football | UHND.com
Before the 2012 season even started, some of the biggest question-marks surrounding the Irish this year were on the defensive side of the ball.

Irish Keys to Victory - Purdue '12 - Notre Dame Football | UHND.com
Here's a look at what Notre Dame has to do this weekend in order to leave Notre Dame Stadium with a 2-0 record for the first time since 2008. Go Deep

OFD Game Day Countdown: Notre Dame vs. Purdue - One Foot Down
Notre Dame looks to stay undefeated as they host this weekend. One Foot Down breaks down the matchup between the Irish and Boilermakers.

Wiggs hungry for second chance in NFL - Purdue Exponent: Football
The most accurate kicker in Purdue history looks back fondly on his time with the Seattle Seahawks.

Purdue Honors Neil Armstrong In Tender Humblebrag - From Our Editors - SBNation.com
This is awesome and I want one.

Laura Gonzalez-Escallon Named Top 10 Player to Watch by Golf World - PURDUESPORTS.COM - Purdue Official Athletic Site
The 2012 Big Ten Player of the Year is No. 9 and senior Paula Reto made the top 50 watchlist.