Share All sharing options for: Purdue Basketball Alumni Recap: The Weekend With Boilers Of Old & New

What?! Two posts in one day from Steve. I realize that T-Mill wrote a fantastic article about the alumni game and inter-squad scrimmage, but seeing as I live and die for Purdue Basketball I'd like to share my thoughts on the new team, as well as my weekend adventures with the men's basketball team; which included one of the alumni coming in and totally stealing the girl I was hitting on at Harry's. But it was probably for the best, since she was at least 12 years older than me. Cougar season starts in August, for those who wonder.

Before we get into that, I'd like to point out that I can't even remember the last time I was this excited for Purdue basektball. This team is hands down the most athletic team that I have ever seen the Boilers have. Before the inter-squad scrimmage started everyone was dunking. EVERYONE! Not just dunking, but tomahawks, crazy-oops, stuff that you see at a dunk contest. If I wasn't already covered in sweat from Mackey being hotter than an oven and me being painfully hungover, you would've noticed me drooling all over my face. Thankfully everyone thought it was sweat, suckers!

Other than athleticism, here are some things that I really liked about this year's team:

But that brings me to a few concerns, the biggest being we blew at free-throw shooting. Granted it was super hot and that more than likely made the ball moist, but we know that Purdue has struggled with free-throws in the past. I'm praying that it was just some preseason jitters and the heat, but if we shoot 30% from the foul line we are screwed.

Something else that concerns me is maturity. We only have two seniors on our team and one of them got arrested. Let me say this before continuing: I love DJ Byrd and am a huge supporter of him. I think he works harder than a lot athletes in the NCAA, and I've talked to him multiple times and know that he is a good guy. Sure, he was definitely in the wrong place at the wrong time when he was arrested, but he still did something wrong and that does not set a good example for our new guys and really hurt Byrd's image.

I'm sure Byrd learned from this experience, but he and fellow senior Dru Anthrop will need to set the tone for this team and be great leaders like Rob, Lew Jack, & Ryne were before them.

I'm also a little concerned about Hammons' and Simpson's work ethic/dumb tweeting. Hammons even tweeted "Need a work ethic", and if Simpson worked on basketball as much as he tweets he would carry us to a National Championship, which makes me feel that Simpson may be someone who gets distracted easily and needs to put his focus more towards school and basketball over tweeting. Painter does a great job at helping big men reach their potential, and he also demands that you give it everything you have. I'm sure that by the beginning of the season and even after Italy both Hammons and Simpson will be more mature, and hard-working players. But reading that Hammons' tweet still gives me a sick feeling.

But my concerns don't even come close to how excited I am for this team! I sincerely believe that these new guys are going to take Purdue Basketball to the next level, as JJ, Smooge, and Robbie did. Watching the alumni game and the inter-squad scrimmage was hands down enough to make this one of the best weekends of my life, but after we left Mackey and went to Harry's, our interaction with Purdue hoops didn't stop there.

Before the game, my friend, Matt, and myself had the privilege of meeting Brian Cardinal. And by privilege, I mean two 22 year-old dudes waited behind a line of children to have Cardinal sign photos and shake our hands while moms gave us dirty looks for shoving kids to get to the Custodian. I was in heaven, but it didn't stop there. Brian Cardinal, Purdue great and NBA Champion tweeted at me, Steve Landrey. You know how girls act at a Justin Beiber concert where Chris Brown walks on stage to sing a surprise duet with JB? Yeah, that was my reaction but on steroids.

After we cooled off from The Custodian's tweets, we realized that we were in the downstairs of Harry's with the likes of Carl Landry, Kenneth Lowe, JaJuan Johnson, David Teague, Matt Kiefer, and, my new favorite alum ever, Chris Reid. Normally we would all be star struck from this, but you know, being at Harry's for 8 hours makes you feel pretty confident, so you don't care that these guys are well known Purdue people or that they will probably get crazy annoyed with your ignorance.

And that is most likely what we did with Landry and Lowe. I spent most of my night comparing my height to Lowe's (which I'm taller than him). At first, he thought it was pretty funny. But after a while you could definitely tell that he was getting annoyed with some drunk moron talking about how tall he was.

Landry was a different story. Carl Landry is a super cool guy and thought we were all hilarious. Every time Landry walked by us he would say "What's up my brothers!" and we would just yell and point. (Side note, we had all met Carl the night before and heckled him for pictures and high-5s. Again, Carl is a super nice guy).

And then there was Chris Reid. Reid. Is. The. Man. We saw Reid out Friday night, and while everyone else was loving on Landry, Kramer, and other alumni, we were chanting Chris Reid's name while he joined us for some fist pumping. Saturday night, Reid was in Harry's with the rest of Purdue gang and of course we chanted his name some more. My friends Matt, Adam, and Alex even got a picture with Chris Reid. Let me give you a breakdown of this photo. Chris Reid is 6'9", Matt is 6'1", Adam is 6', Alex is 5'8". Alex decides that he doesn't want to be the shortest person in the picture, so he stands on a chair in the upstairs of Harry's and has someone take the picture. Reid, obviously, thinks this is hilarious. So what does Chris Reid do? Pulls out his phone and has someone take the exact same picture because Chris Reid is the man. And this recaps the greatest weekend of my life. 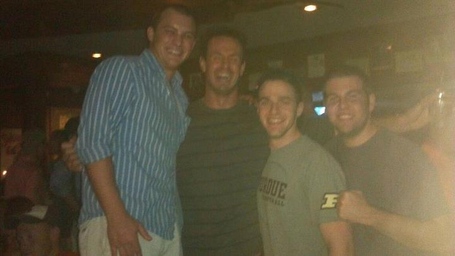