Purdue Men’s Basketball: The Past Meets The Future (With Video)

Share All sharing options for: Purdue Men’s Basketball: The Past Meets The Future (With Video)

Even with the sweltering temperatures in the non-air conditioned Mackey Arena it was a fantastic day to revel in all that is Purdue basketball. The lack of AC and the humidity in the place reminded me of summers spent at Kokomo's Memorial Gym in Basil Mawbey's basketball camp. The people in the stands were sweating just as much as those on the court. For a few moments it felt like home.

The number of players that came back was impressive. There were some big names, of course. Current NBA players JaJuan Johnson, Carl Landry, Robbie Hummel, and Brian Cardinal were there (only Cardinal actually played). Recent players Lewis Jackson, Chris Kramer, Marcus Green, Chris Reid, David Teague, and Ryne Smith all played. Troy Lewis, Brandon Brantley, Todd Mitchell, and Roy Hairston stepped out of my youth and back onto the court. Even Steve O'Neil, who never even played in Mackey Arena in his career (graduated in 1966), came back and scored a basket. My nemesis, B.J. Carretta, (who cost me the 1996 IHSAA State title) was there.

Yes, the basketball wasn't exactly what we're used to seeing from these guys (Chris Reid had more point today than in his entire career), but it was very competitive. With the game tied at 67-67 both Teague and LewJack traded threes. The Black team, who was coached by Gene Keady (whose name is only on the friggin' floor) had the final possession and Keady called an iso play for LewJack, who splashed a game-winning three at the buzzer and even added the Pedro Cerrano "I have large balls" dance back down the floor. 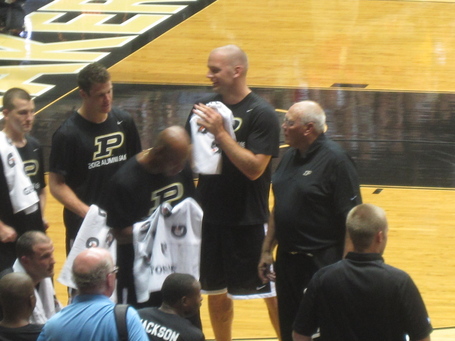 The alums were great. You could tell everyone had a good time. Perhaps their best moment of the day came afterward. Mrs. T-Mill and I took a moment to visit Harry's. We weren't even there five minutes when JJ rolls in with several other alumni players. He asked for first floor fish bowl and he got it, as the waitress started handing out checks as if the place were on fire. Such is the power of being a basketball player on campus.

The most intriguing part of the day was a chance to see the future. Today was the public's first time it got a chance to see the new Men's Basketball team in what is clearly a year of transition. Much of the old guard is gone. D.J. Byrd is the lone senior that has extensive playing time. Four incoming freshmen are going to play very large roles as three starters, including two that played a large number of minutes in all four seasons they played, are now gone.

What stood out to me is that this team is talented, but the youth that it has will show at points. Purdue almost always relies on its seniors, but Byrd can only do so much. The second senior, Dru Anthrop, needs to be a player that is at least a serviceable option for a few minutes each night. He's going to be one of the team's better outside shooters. If can play a role and earn some minutes I am fine with it. He should be able to by this point in his career.

Outside of Byrd, however, we're going to be in transition as we try to find who will not only lead this year, but next year. Terone Johnson was kind of hidden all day and Anthony Johnson seems as if he can't decide if he is a shooter (where I think he should be) or someone who attacks the basket.

Scoring is going to be a problem. Rapheal Davis is fearless in attacking the basket, but he needs more of a jumper. The lanes to the basket in high schools imply will not be there in the Big Ten. I love his attitude though. He's one of the first players we've had in awhile that really looks to attack the rim. It will pay off, but I can tell he's going to go through freshman struggles.

Another reason the 2012-13 Boilermakers will be a transition team comes from the very makeup of the roster. In the past we have been extremely guard-heavy with a perimeter oriented offense. This coming season I feel like we're going to have to go back to old-school Purdue basketball where size in the post punishes teams. In relation to that, the player who impressed me the most today was Sandi Marcius of all people.

I think things may have finally clicked for Marcius. The big man is probably the most lean he has been in his time at Purdue and his body type gives us a bruiser we haven't had in quite some time. If you toss him the ball in the low block he's better with his back to the basket, but still not fantastic. What stood out to me was his aggressiveness. The Chooch attacked rebounding with reckless abandon and showed he can be a guy that gets those garbage baskets on offensive rebounds that can be so valuable. He also ran the floor well in transition and had a few impressive dunks. When I say that things finally clicked I mean that he realized he will be most successful if he busts his ass at all times on the floor. This summer, and the two NCAA Tournament games, have been good to Marcius.

A.J. Hammons also showed that he will be a banger, and I could possibly see us going with a Chooch-Hammons super-big combo in the post to simply pound people physically. Marcius is a player that thrives on the junk within five feet of the basket (11 points and nine rebounds). Hammons showed a nice outside touch in addition to solid defense. He is still a little raw, but you can tell he has never really been challenged before now, and going forward he will finally face some challenges where brute strength won't always be the answer. If Painter assures that his give-a-shit is turned an at all times he can be an unstoppable force in the league.

Ronnie Johnson is going to be the starter from day one at the point, but in that, we're going to go through freshman struggles through him. His jumper is unreliable right now, but he clearly wants to pace the offense. He's a little different from LewJack in that he is more calculating without the blinding speed. In the long run, that will be beneficial.

Donnie Hale looked a little hesitant to me today. This is a concern because he's waited two years to get to this point, yet he still seemed to take a back seat to others. Another player that really struggled was Travis Carroll. I like Tacos. I think he's a nice guy, but I also think his problem is that he thinks too much on the floor. At times, you can almost see the thought bubble of "The fans ride me all the time, don't screw up" forming above him. That can be a major detriment. It's easier said than done, but he needs to think less.

Everyone else was about what you could expect. Jacob Lawson looked sharper and I would place him as No. 3 if you ranked out five post players. I would put Marcius No. 1 with Hammons a close second. Lawson would be third, Carroll fourth, and Hale fifth (Jay Simpson did not play). The guard really struggled. No one's jumper, aside from Byrd's looked good at all. Fortunately, there is time to work on this.

I want to call this incoming group, with the three 2013 commits, The Next Step. As a program for the last 30 years we have had some great accomplishments with high national rankings, Big Ten championships, and multiple NCAA Tournament appearances. The foundation is there, but The Next Step, Final Fours and National Championships, is the responsibility of this incoming group. We remain as one of the best programs int he country without a National Championship and our Final Four drought is embarrassing. This group needs to end that.

I leave you with some video of the day which includes LewJack's winner from where I was sitting. I can tell you that one of the early season games is November 21 against UNC-Wilmington, and that this team has some work to do before that game comes. Fortunately, I know they have the time and ability to make this coming season a successful year. It is clear to me that the talent is there to return to the NCAA Tournament, as it should be every year. It is up to these young men to put in the work to get there.