Share All sharing options for: Boilermakers enjoying time in Columbus before Thursday game

Although last weekend at Iowa didn’t go as expected, the Boilermakers are still looking to host a regional and won’t have any issues with a strong showing at the Big Ten Tournament. Coach Schreiber looks at it as "just another weekend series," where 3 straight wins can earn the Big Ten Tourney crown.

We left from Purdue on Tuesday afternoon and it was great to see the 40 or so fans that came to send off and support the team on our way to Columbus. We arrived later that evening and headed straight for dinner after checking into our hotel. We ended up eating across from Nationwide Arena, which is host to the Columbus Blue Jackets. There was an LMFAO concert happening that evening, so downtown Columbus was pretty busy. Afterwards, the team spent the rest of the night relaxing and enjoying the free time since they don’t play until Thursday.

Currently the team is at Huntington Park and watched 5-seed Michigan State take Game #1 of the tournament with a 10-9 victory over 4-seed Nebraska while pounding out 17 hits in the process. Nebraska seemed dead in the water until they scored 7 runs in the bottom of the 9th all with 2 outs to trim the lead to 10-9.

With a runner on second, MSU threw a wild pitch which allowed the Nebraska base runner to head to 3rd as the tying run. The next Nebraska hitter ripped a line drive to the second baseman but he made an amazing leaping catch to secure the victory for the Spartans. 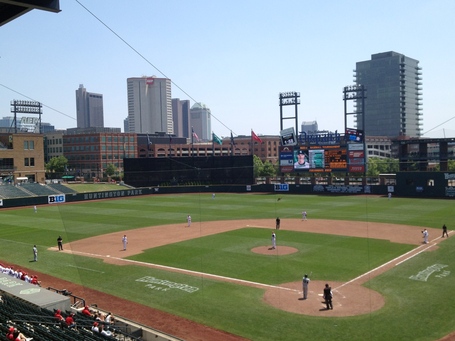