Wow, what a way to end the era that was Lambert Field. This game was a pitcher's duel from the start, and definitely lived up to the hype. Before the game, however, time was taken to honor the 15 seniors that have helped the program to a new wins record and the first B1G championship in 103 years. 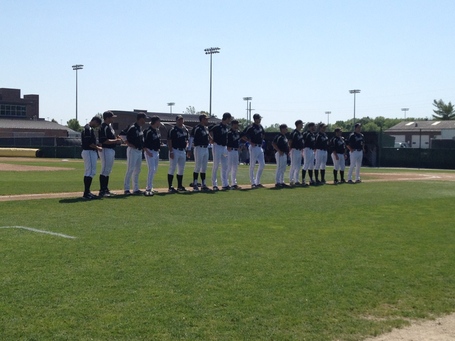 Robert Ramer took the mound for the Boilermakers, and pitched a solid 5 1/3 innings of 1 run ball. Calvin Gunter and Nick Wittgren combined for 4 2/3 innings of 3 hit ball out of the bullpen. The offense, on the other hand, struggled with the bats against Indiana State freshman Kyle Rupe, who gave up just 2 hits in 6 2/3 innings.

ISU was able to score in the top of the 4th inning after an error in left field, and seemed to have control and on their way to a solid victory at Lambert Field after retiring the first two batters in the bottom of the 9th inning. But that's when it all changed.

Sophomore Sean McHugh came in to pinch hit for Senior Barrett Serrato in hopes to just get on base and make something happen. He had been hitting in the cages for the past few innings, so he came in and wasmore than ready to go. And boy did he come up big. First pitch, GONE...solo shot over the left field fence. Just like that, Purdue tied it and was back in the game.

In extras, Wittgren shut down the Sycamore's offense which would help give the Boilermakers a chance to come back and take the victory in the bottom of the 10th inning. After consecutive singles by Seniors Andrew Dixon and David Miller (how fitting) the Boilermakers loaded the bases as Junior Cameron Perkins came up to bat with one out.

He hit the ball to left field, and scored Miller on a bizarre ending as the Boilermakers came back and "stole" a victory from a very good Indiana State when it seemed there was little chance.

A fitting end to Lambert Field, and a fitting end for the Senior's at Lambert as well. Here's what Schreiber had to say after the game:

Although Purdue has clinched at least a share of the Big Ten Title, they are still looking to clinch it outright and can do so with one win in this weekend series. I honestly see no way that doesn't happen, as Iowa is currently 9th in the Big Ten with an 8-13 conference record.

The only Big Ten series they have won was against last place Northwestern when they took 2 of 3 back in late March. They rank in the bottom of the Big Ten in most categories, so look for the Boilers to pretty much cruise through the weekend.

Offensively, Mike McQuillan and Phil Keppler will do the most damage. They are the only two batters on the team currently batting over .300. McQuillan also leads the Hawkeyes with 13 stolen bases, 37 walks, 40 runs, and a .465 OBP. However, he does come in second on the team with 33 strikeouts.

Iowa does seem to have some decent pitching, but nothing that the Boilermakers can't handle or haven't seen already this year. The 3 weekend starters have a combined 3.85 era and have a few guys out of the bullpen with sub-4 ERA's.

Junior Catcher Kevin Plawecki was named as one of the 12 semifinalists for the Johnny Bench award, which honors the nation's top catcher. He and Florida catcher Mike Zunino are the only two to have been named semifinalists each of the past two seasons.

Senior Joe Haase was named B1G pitcher of the week this past week, making it the 2nd time this season and 3rd time in his career he has earned the honor.