This weekend started out a little differently for us. Instead of heading out on Thursday afternoon, we left West Lafayette at 10:30 on Friday morning. We ended up getting stuck on the Dan Ryan (surprise, surprise) for about a half hour, and arrived at the field around 2 Eastern time. After a rushed BP session, and some Potbelly’s sandwiches, the team was ready for some action. 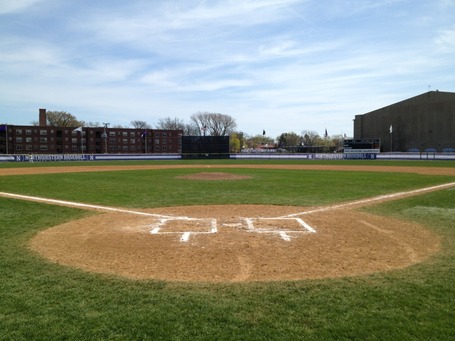 Senior righty Joe Haase absolutely dazzled in another solid start for the Boilermakers, pitching a complete game 2-hit shutout and earning his 5th win of the year. The Boiler offense continued its’ early dominance, scoring 3 runs on 3 hits on the top of the 1st inning.

After Senior Tyler Spillner lead off the game with a base on balls, Senior Eric Charles hit a single to put runners on 1st and 2nd with no outs. A double by Junior Cameron Perkins scored the first run of the game, and Junior Kevin Plawecki followed it up with a single to score the 2nd run of the game. Junior Angelo Cianfrocco plated the 3rd run with a sacrifice fly.

The rest of the game pretty much cruised by after. Northwestern’s pitcher was able to settle in and find his comfort zone for the next 6 innings, but he may have been left in 1 inning too long, as the Boilermakers tacked on 4 more run in the top of the 8th (all with two outs). The Boilermakers got 5 consecutive hits from the 3 through 7 hitters, and Joe Haase finished out the 8th and 9th innings as the Boilermakers took game 1 by a score of 7-0. They improved their record to 22-5 on the year with the victory.

Game 2 brought some fantastic weather as well as a pitcher’s duel. After downing some pregame Potbelly lunch, and arguing what superpower would be the best to have, the team was ready to get it rolling against the Wildcats.

Northwestern basketball superstar John Shurna was there to throw out the first pitch, and I made sure to go talk to him for a bit while he was at the game…really nice guy, by the way. 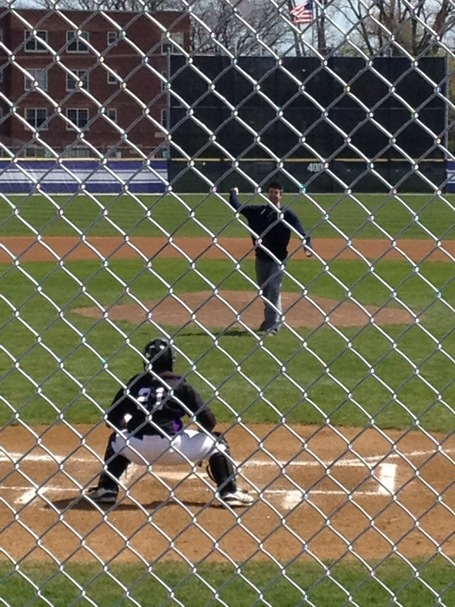 For the second game in a row, the Boilers were able to score in the 1st inning. After a Cameron Perkins 2-out single and stolen base, Junior Kevin Plawecki singled him in to give the Boilermakers the early 1-0 lead.

Senior Lance Breedlove was in his usual form for the first 4 innings, not allowing a hit until then. Although his command was off a bit afterwards, he still only gave up 1 run on 5 hits in 7 innings pitched. This was mostly due to the defense, as they turned 2 key double plays in the 4th and 6th innings.

After Northwestern finally scored their 1st and only run in the 7th, Purdue retaliated with another run in the top of the 9th after Junior Stephen Talbott was able to reach with a leadoff single. Junior Nick Wittgren came in and closed the game, earning his 5th save of the season with the 3-1 victory. Stephen Talbott finished 3-4 on the day, and was thrown out trying to steal for only the 2nd time in his career, although according to him he was safe on the play.

Afterwards, we headed to dinner, which, according to volunteer assistant coach Payton Bieker was 45 minutes away. However, coach Tristan McIntyre timed the drive back and it was only 17 minutes (he guessed it would be less than 20). Score one for T-Mac…the (assistant) coaches love having various competitions.

Game 3 was an important game. We were looking to try and get a sweep out of Northwestern, seeing as we hadn’t swept a series since Murray State one month ago. Also, it would give Purdue their first B1G road sweep since 2001.

Northwestern got things rolling first in this game, scoring 1 run in the bottom of the 1st inning off of Freshman Connor Podkul, who was making his weekend rotation debut. Purdue countered with a run of their own in the top of the 2nd, thanks to 2 Northwestern errors and a single by Senior Tyler Spillner. Purdue also put up 4 more runs in the top of the 4th, and 3 runs total in the 6th and 7th innings to claim an 8-4 victory and finally get the sweep the team was looking for. Junior Angelo Cianfrocco also managed to shatter some plexiglas behind home plate when he fouled a ball off in an at-bat in the 8th inning. I made sure to get a piece of it for him as a souvenir. 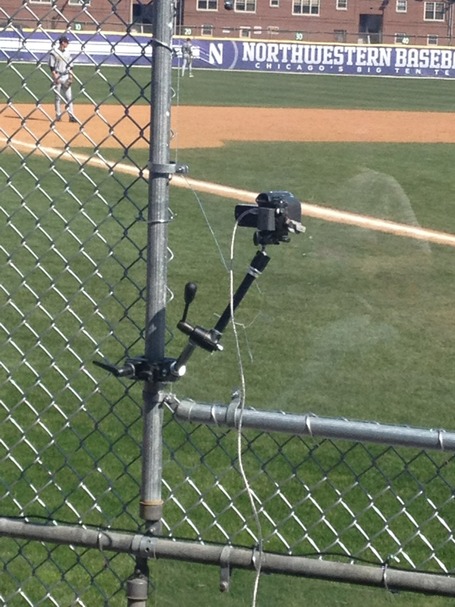 With the win, it put Purdue’s record at 24-5 on the season and 7-2 in Big ten play, taking sole lead of 1st place. Podkul went 6 strong innings, giving up 3 runs on 6 hits, but also striking out 6. Junior Cameron Perkins and Senior Andrew Dixon both went 3-4 on the day. Purdue has now won 8 of their last 9 games, and pitching has averaged giving up less than 2 runs per game in that span.

It was then time to head back to West Lafayette. Little did we know it would be almost impossible to find somewhere to eat, since almost every restaurant was closed on Easter Sunday. However, after about 10 minutes of driving around in Merrillville, we settled in on a Dairy Queen, even though most people would have rather just gone straight home.

This week we have a midweek game at Ball State on Wednesday, followed by a home weekend series against Illinois. Joe Haase was named B1G Pitcher of the Week for his 2-hit shutout on Friday, becoming the 5th Boiler to earn B1G weekly honors this year.

The "Dream Team" was also featured on the Big Ten Diamond Report on Sunday. If you weren't able to check it out last night, here's the link to the YouTube video:

UPDATE: Three of the five polls are out for the week:

BaseballAmerica.com: College: Top 25 Rankings: College Top 25: April 9
Purdue stays at No. 19 according to Baseball America after a 4-0 week.