Share All sharing options for: Boiler Baseball defeats Anderson in midweek matchup before heading to Northwestern

It was nice to finally head back down to downtown Indianapolis, since that’s where I’m from and where I work in the summer. We left Purdue at 3 and made it to the stadium at 4:30. I then made the dinner order for Bazbeaux Pizza, which is easily the best pizza joint in Indianapolis. 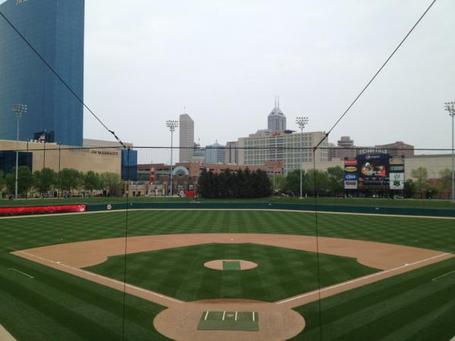 After doing that and setting up my camera, (which I’m not sure I even needed to do since this game was televised) I decided to mess around a bit and wandered into the Indianapolis Indians clubhouse. I took a quick look at all of the names of the jerseys hanging up, but didn’t recognize any of them, unfortunately. Here’s the pic I took: 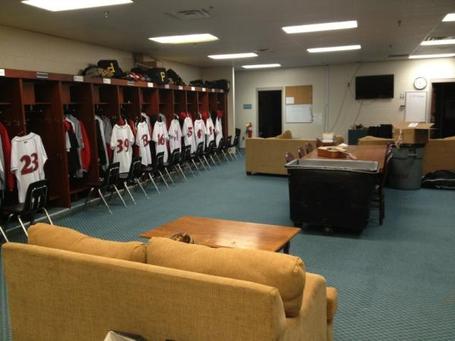 This game went pretty much as expected. The Boilermakers scored 3 runs in the top of the 1st off of Anderson’s number one pitcher, who wasn’t originally scheduled to start the game, but their coach inserted him in the starting role an hour before the first pitch. Senior David Miller and Junior Stephen Talbott lead off the 1st with back-to-back singles, and after Junior Kevin Plawecki was hit by a pitch, Purdue had the bases loaded with one out. Senior Barrett Serrato singled in 2 runs, and a Sean McHugh walk gave the Boilermakers their 3rd run of the 1st inning.

The Boilers also scored one run each in the 2nd, 3rd, and 5th innings. After Senior David Miller’s second leadoff single, Junior Kevin Plawecki singled him in in the 2nd. Sophomore Sean McHugh lead off the top of the 3rd with a triple and scored, and a 2-out double by Senior David Miller (who finished 4-5 on the day) plated Freshman Brandon Krieg who was starting at 2B because of an injured Eric Charles.

The pitching staff combined for 1-run ball on just one hit. Senior Robert Ramer started and pitched 3 perfect innings with 3 K’s until the bullpen (composed of Pat Gannon, Andrew Quinnette, Brett Andrzejewski, Sean Collins, and Nick Wittgren) shut down the rest of the Anderson lineup. Anderson got their 1 run in the bottom of the 9th after a walk, wild pitch, and dropped fly ball in right field. I actually ended up missing this because the pizza was 20 minutes late and the driver came with 1 out in the 9th. For those of you that remember reading, I missed Barrett Serrato’s home run in Auburn due to a food order. This time around, I was actually GLAD to miss some of the game action. Purdue improved their record to 21-5 on the season after the 6-1 win on Wednesday.

Senior Lance Breedlove was yet again named B1G pitcher of the week, already the 3rd time (2nd in a row) he has earned the honor this season. No other Purdue pitcher has won it 3 times in a season. Breedlove was also named to the College Baseball Hall of Fame's weekly National All-Star Lineup for his 2-hit shutout of Penn State last weekend.

Northwestern (10-15, 3-3 Big Ten) comes into the series having won 2 out of 3 games vs. Nebraska last weekend, which is a pretty good accomplishment considering Nebraska was 19-9 overall before the series.

Jack Havey (although not leading in avg.) leads almost every other offensive category for the Wildcats. He’s hitting .327 with 4 HR, 22 RBI, and 50 total bases.

(Sidenote: this is a guess at the Northwestern rotation as I don’t have the actual information, but look at the schedule to see who has lately been throwing on the weekend games.)