More On The John Hart Transfer

Share All sharing options for: More On The John Hart Transfer

Yesterday, the not surprising news broke that John Hart, who would have been a fifth year senior, announced he was transferring from the program. I wish John the best. As I said yesterday, Purdue does not win the Big Ten title two years ago without him. He started the 2010-11 strong before foot injuries derailed his career over the next season and a half.

That last point is critical. Take a look at the scholarship grid: 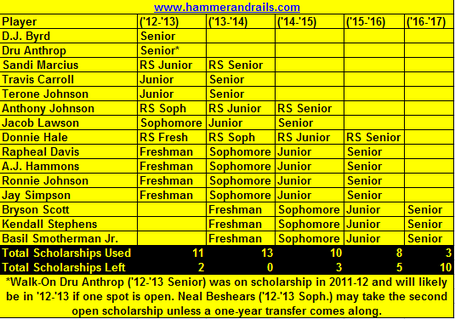 The 2013-14 situation is the kicker here. If Purdue does sign two more players, one almost certainly has to be a one-year transfer. We can handle a multi-year player under the clause that you can oversign a class by one and hope the situation resolves itself, either by another transfer (say Sandi Marcius, who in 2013-14 will be in Hart's 2012-13 situation) or if an incoming freshman goes to prep school and reclassifies for 2014. Signing two multi-year players puts us two over for 2013-14, which could cause both a transfer and a prep school situation. That, or we have multiple freshmen like A.J. Hammons and Rapheal Davis play absolutely out of their minds, Purdue wins the 2013 NCAA title, and they go to the NBA early.

Naturally, I can live with the second scenario there, but it is highly unlikely. One reason is that our guard rotation now is severely limited. The past few years we have seen a dearth of talent in the post and a wealth of talent at guard. Now we have the opposite. Here is how things stack up now at each position:

The graduation of Lewis Jackson sees us lose a fantastic, experienced point guard. TJ got some backup minutes at the point this past season and was successful (see the Michigan game in Ann Arbor). He's more of a scorer than a distributor. His brother will now see extensive minutes at the position as our only true point guard. This is very good for the future, but he is still only a freshman. That's a tightrope we're going to walk all year.

As for Anthrop, he is a senior, he's been with the program for three years, and he's entering his second year (most likely) on scholarship. It's time for him to earn it. He's a smart player who hustles. I'm not asking for much, but if he can contribute 3-5 minutes of effective basketball per night to rest some others it will help.

This position and the three are where we are going to get our versatility in the big vs. small lineup. The chances of us going full Law Firm (Johnson, Johnson, and Johnson) are now slim. That's almost a super-small lineup, but it also our quickest and could be defensively tough enough that we might try it on occasion if we want to go fast break. I can see Byrd spending some time at the two if we go big, but he's more likely going to be at the three while the Law Firm and Davis rotate at the two. That's a good lineup, but you're asking for great guard play in a tough conference with two true freshmen and a sophomore. There will be growing pains, and this is where Hart's experience will be missed.

This is our thinnest position, as we don't have a lot of choices now as true No. 3's. We have Byrd and that's it unless you count Beshears, who is a walk-on that won't play a lot. Davis is big (6'5", 200), so he would likely be here in a three-guard lineup unless we go full Law Firm. Hale has enough of an outside game that I trust him here if we decide to go big against bigger teams. The key in Hale playing here is that we can go 6'8", 6'8", 7' across the front line in a more traditional two guard, two forward, and a center offense. I understand people's skepticism here because it has been over a decade since we've had the luxury of going that big. Of the forwards, Hale's game is best suited for the three in a traditional 2-2-1 offense. We simply have either not had a true center or not had the necessary depth in the post to do this since probably Brad Miller's time on campus.

One of the things that has me excited is that for the first time in ages, we can have power forwards actually playing at the power forward spot, not just fours being forced to play at the five. Yes, JaJuan Johnson won Big Ten Player of the year playing at the five, but we all know he is more naturally a four because he has more of an outside shot and is not a banger on the low block.

We don't have to worry about that anymore with Carroll and Lawson, who can thrive as fours. I still like Carroll's 15-footer, and he acquitted himself very well defensively against fours last year. Lawson needs to get over his foul issues, but his athleticism is better utilized as a position where he is not anchored to the low block. A few times we ran the screen and roll play for Lawson this past season and it worked where he set a screen, rolled off, and flew down the lane for a dunk. Now that he doesn't have to play on the low block we can use these guys for that high screen, which is deadly when you have a center to free them up at the top of the key. Simpson and Lawson have the athletic element the position calls for, while Carroll and Hale have enough of a mid-range game to draw a player away from the basket and open the lane for guards. I like that.

At last, we have not just one true center, but two! The Chooch with his body type needs to be within five feet of the basket at all times. I want him to become a dirty work player that gets rebounds, gets the occasional cheap basket on a put back, and defends. He played very well in the NCAA Tournament. He had 16 minutes in each game, and against St. Mary's he had 5 points, 2 blocks, a steal, and 3 rebounds. Against a better Kansas team he had six boards. If we put him at the five and only five, I think he can be even more effective when he is not the lone post player we have on the court.

That is where the luxury of having so many forwards comes in. We no longer have to rely on one guy in the post and hope that a second can be somewhat effective. Hammons is going to be a five. There is no question about that. He and the Chooch give us two guys that we can say, "alright, stay on the low block, rebound, and get baskets at the rim." We have four other guys that can come out and do the screen work that we've been forced to have our fives do for years. This will only improve our rebounding and interior defense. I think the skepticism comes from the fact we haven't been able to do it because of our lack of depth in the post. If people haven't seen it, they think it can't be done.

We're now on the knife edge. We are clearly asking three of the true freshmen, (Davis, Johnson, and Hammons) to be immediately effective in a conference that is going have at least nine teams as threats to make the NCAA Tournament. We know they have talent, but that talent is going to have to overcome our lack of experience in comparison to other teams in the league. I consider the challenge answered if they meet the goal of another 20-win season with 10 Big Ten wins, an NCAA berth, and a first round victory. I don't think that is an overwhelming goal. That will give us a lot of promise going into the 2013-14 season when that talented youth has experience.