The Boilermakers yet again put up a run in the first inning, thanks to an RBI double by Junior Cameron Perkins which scored Senior Tyler Spillner after he lead off the game with a single. 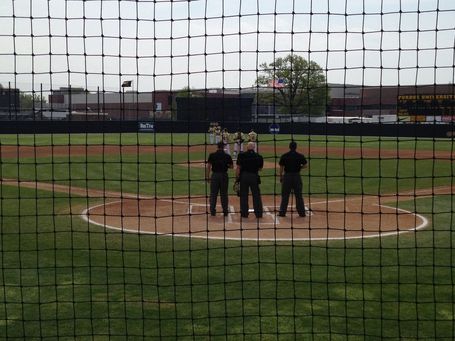 Most of the rest of the game was a pitcher’s duel, as both starters pitched at least 7 innings. Senior Joe Haase was fantastic yet again, going 7 2/3 and not giving up a single run off of 5 hits. The Boilermakers wouldn’t score again until the bottom of the 8th inning, when seniors David Miller and Tyler Spillner each hit doubles, and Senior Eric Charles added another RBI single to score Spillner.

Senior Blake Mascarello and Junior Nick Wittgren combined for 1 1/3 innings of hitless relief from the bullpen, and Wittgren earned his 6th save of the season with the 3-0 opening series victory. The game also ended in a double play, which meant everyone in attendance got a free McDouble from McDonald’s. I now have 4 coupons for free McDoubles…something I’m not going to complain about. Haase moved to 6-0 on the season, and the Boilers are now 9-0 in games which he starts. With the win, the team improved to 26-5 on the season, and 8-2 in the Big Ten.

Unforunately, game 2 was rained out on Saturday, which meant yet ANOTHER doubleheader for the team. This was now the 4th doubleheader that the team has played this season. The original plan was to try and get the game in at 3:45, but it was ultimately decided that the weather conditions wouldn't be favorable for playing a game.

At least for me, I was only at the field for an hour before they made the decision. The players, however, were there for quite a while, and spent most of their time fooling around playing various games and whatnot.

So at noon on Sunday, game 2 started. The Boilermakers got yet another quality start out of Senior Lance Breedlove as he went 7 2/3 innings, (just like Haase did in game 1) and lowered his ERA to 2.23 on the season.

This time, "The Pack" didn’t score until the bottom of the 5th inning, when an Andrew Dixon sac bunt scored Junior Angelo Cianfrocco after he lead off the inning with a double. They also added 2 more runs in the bottom of the 6th inning. They loaded the bases after 2 singles and a hit-by-pitch, all with no outs. Illinois walked 2 more Boilermaker batters to give them their 2 runs in the inning. 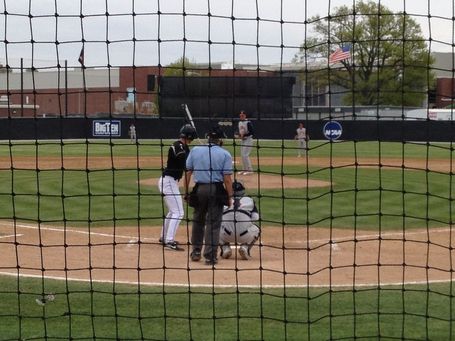 Purdue also tacked on another run in the bottom of the 8th to take a 4-0 lead. Illinois was finally able to score in the top of the 9th, but the 1 run wasn’t enough as the Boilers took game 2, 4-1.

Head coach Doug Schreiber earned his 407th career victory, tying Dave Alexander’s all-time record. With a win in game 3 and sweep of Illinois, he would then be the all-time winningest coach in Purdue baseball history.

Yet again, the Boilers put up a run in the bottom of the 1st inning. This has been quite the trend for the team lately, being able to score right out of the gate and swing the momentum in their favor. I think this is something that really helped them during the past few weeks.

A sacrifice fly and a wild pitch helped score both Tyler Spillner and Eric Charles. This is another thing that the team has done very well with hitting-wise; being able to get the leadoff man on base.

Neither team scored again until the 8th inning; Illinois from an RBI single, and Purdue scored after hits from Junior Kevin Plawecki and Senior Andrew Dixon, as well as 2 more wild pitches from the Illinois relief pitcher. Purdue turned another double play, which meant another free McDouble for everyone at the game.

Senior Blake Mascarello closed out the game as the Boilermaker won 5-3, getting their second consecutive B1G sweep, and earning Doug Schreiber his 408th and all-time program leading victory. Here is a postgame interview with Schreiber and a few other players (also see him get the shower from the gatorade cooler):

The team has now won 8 in a row, and 12 of 13 games. During the win streak, the pitching staff has posted a 1.12 ERA, something that has been overlooked due to the team's offensive prowess. I will not be heading to the UIC game on Tuesday, so there won’t be a recap for that game. The team heads to Nebraska this weekend for what looks to be a tough series, so I’ll definitely have a preview up for that series in the next few days.