This midweek test brought a decent game to the fans who were there to witness it…for the first 5 innings at least. Purdue scored one run in the top of the 2nd inning thanks to a leadoff double by Junior Kevin Plawecki, and Junior Angelo Cianfrocco singled him in with 2 outs for the first Boilermaker run. Ball State countered with one run in the 3rd and 4th innings by stringing together a few singles and taking a 2-1 lead after 4 innings.

Purdue came back and scored 2 more in the top of the 5th, thanks to two errors in the inning by Ball State (who ended up with 6 errors in the game). Then it all came loose in the top of the 6th, as the Boilermakers posted their biggest inning of the year, scoring 12 runs and batting two times through the order. There were too many hits to list them all, but the inning started off with back-to-back-to-back doubles by Senior Barrett Serrato, Sophomore Sean McHugh, and Junior Angelo Cianfrocco. Both Cianfrocco and Senior David Miller hit bombs over the right field fence. 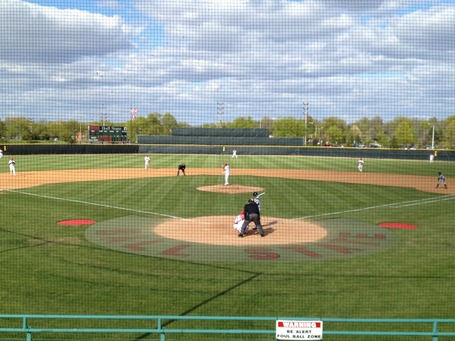 Along with earning B1G co-pitcher of the week this past week, Senior Joe Haase was also named to the College Baseball Hall of Fame’s weekly National All-Star Lineup. Senior Lance Breedlove was named to the same lineup last weekend.

Offensively, Illinois has a few guys that can do some damage. Jordan Parr leads the team with a .363 batting average .549 slg %, 3 triples, and 62 total bases. Brandon Hohl leads the team with 5 HR and 50 RBI, but also has the most strikeouts (25). Out of the pen, Illinois will look to go to Anthony Milazzo and Reid Roper. Combined, they have given up just 2 earned runs in a total of 16.2 innings pitched.