Friday’s game against Auburn brought something the Boilers have yet to do this season: play on a Friday. The first two weekends in Tampa and North Carolina both brought Friday rainouts and Saturday day/night doubleheaders. Thankfully, the original start time was moved up an hour to account for possible rain that was headed our way. After an early afternoon BP session at a local high school, followed by a couple of hours to rest at the hotel, we headed off to Hitchcock Field at Plainsman Park two hours before game time. The game before us was nearly over, and ended with Southern Mississippi blowing out the Bucs of Charleston Southern, 16-2.

Senior Joe Haase started on the mound, going 4 1/3 innings and giving up 3 ER in the process. Seniors Eric Charles and Tyler Spillner both had fantastic days at the plate, going 4-5 and combining for 5 of the 9 Boiler runs. Purdue took a 9-5 lead going into the bottom of the 9th inning, and that’s when things got a little interesting. Auburn was able to load the bases and score 3 runs to make it 9-8 with only one out and a man on second. Junior Nick Wittgren, however, came through and retired the last two batters to give the Boilers their first Friday win of the season, and an overall record of 6-1.

This ending was similar to last weekend’s win against ECU, when the Catamounts were down 2 runs with the bases loaded in the bottom of the 9th. Wittgren then took a ground ball to start a double play and seal the victory. Too close for comfort if you ask me, but a win is still a win.

Auburn fans were not as hostile as the ones from ECU and "The Jungle," but they were still heckling some of our players the whole game. Senior David Miller, for instance, was getting called "Snooki" (in reference to the TV personality from The Jersey Shore) until his fantastic diving stop that should have been a SportsCenter Top 10 play…except for the fact ESPN does absolutely no college baseball coverage. Tomorrow's game will feature another quality non-conference opponent in Southern Mississippi.

I swear there has to be rain at least once on our weekend road trips. We arose for an 8:30 breakfast only to see cloudy skies and pouring rain, leaving us questioning if we were destined for a third doubleheader in three weekends. We were told our scheduled BP time was moved back 45 minutes in order to account for field conditions, and headed to the field ready to get another ‘W.’ I distributed the pass list around the bus, and saw names such as Tim Hudson, Bo Jackson and Frank Thomas were included (a joke in reference to the outfield wall tribute to the players). 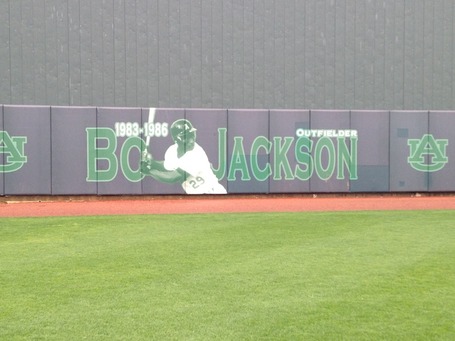 This game was believed to be the most exciting matchup of the four teams participating in the tournament, and boy, did it live up to the hype. Coming into the game, the two teams had a combined record of 13-4. The Boilers were hitting .354 and Southern Miss had a team ERA of 1.45. Luckily, we were able to start on time, and things got rolling right away.

The first 4 innings were pretty exciting, as Southern Miss took a 4-3 lead over the Boilers heading into the top of the 5th. The Golden Eagles then turned up the offense and scored 5 runs in the next 2 innings, making the Boilermaker fans a bit nervous as the Eagles took a 9-3 lead after the top of 7th. Anyone who knows this team, however, knew the big inning would come eventually; and that’s exactly what happened in the bottom half of the 7th.

Senior David Miller hit a single up the middle with two outs, and Junior Stephen Talbott hit the second triple on the day to score Miller and get the rally going (Sophomore Sean McHugh hit the team’s 1st triple of the day back in the 2nd). The big hit of the inning came to Senior Barrett Serrato, as he SMASHED a 3 run homer over the right field fence.

(Side note: What really pissed me off about this was the fact that our lunch had arrived when Plawecki was up to bat. This meant that I had to leave the stadium to get the boxed lunches for the team, which usually takes anywhere from 5-10 minutes. I tried to hurry as to not miss any action, and in doing so forgot to leave the camera on record AND ended up missing Serrato's blast...extremely annoying.)

As David Miller put it, "anything that could have gone right for us in that inning, went right." The Boilers scored 7 runs that inning...ALL with two outs.

The Boilers took that 10-9 lead into the 8th, and neither team scored after that. Sophomore Jack Deano was able to shut down the offense of Southern Miss, closing out the game and earning his first win of the season. The Boilers couldn’t have asked for better relief pitching from Deano in his debut, as he pitched the last 3 innings and held the Golden Eagles hitless for all 3 frames. A win on Sunday would give the Boilers an 8-1 record heading into the spring break trip.

The bus ride back to the hotel filled with the smell of Zaxby’s boxed lunches and players itching to get in some NBA Hangtime action. The assistant coaches were looking to get another NCAA Football tournament going before 6:30 dinner, especially since Coach McIntyre manhandled coaches Bieker and Duncan the previous weekend. Everyone will be relaxing for the rest of the night, but they will be up bright and early to prepare for Charleston Southern on Sunday.

Sunday's breakfast was scheduled for 7:30 a.m., still not as early as the 6:30 breakfasts we had the first weekend in Tampa, though. We left for the field at 8:45 eager to get the game started and score some runs. Today’s pass list featured some big time Alabama alumni, including Mark Ingram, John Parker Wilson, and Tommy Hunter.

Sunday has recently been known as “hit day,” as the team calls it, due to amassing a total of 34 hits and 29 runs in the previous two Sunday games. Charleston Southern had been outscored 27-3 in their games against Auburn and Southern Miss, so there were some big expectations for “The Pack.”

Senior Calvin Gunter had his best start of the young season, going 5 1/3 innings and giving up just 1 earned run. He even loaded the bases in both the 4th and 5th innings, but CSU was only able to score one run in the process. The offense had difficulty in the first 3 innings, but managed at least one run in the next four innings.Junior Kevin Plawecki lead off the 6th inning with his 2nd homerun in as many days, and 2 pass balls in the 7th allowed for 2 more Boilermaker runs.

Senior Blake Mascarello came in in the 6th inning to relieve Gunter and shut down the CSU offense, stranding runners at 2nd and 3rd. He also pitched a hitless 7th, keeping the Boilers lead at 5-2 heading into the bottom of the 8th.Nick Wittgren pitched the 8th and 9th innings to close out the game and earn his 3rd save of the season. The bullpen was fantastic for the past 2 games, only allowing 2 hits in 6 2/3 innings.

Next week’s spring break trip will feature stops in Kentucky, Missouri, and Kansas. The Boilers will look to improve their already impressive 8-1 overall record and best start since 1959.

The flight from Atlanta won’t leave until 10 p.m. tonight, so that gave us some time to check out a DELICIOUS local restaurant called Cheeburger Cheeburger. Junior Angelo Cianfrocco was finally able to sneak Space Jam into the bus DVD player, an amazing feat considering the movie had already twice been rejected by the coaches. Now only 2 hour and a half bus rides and an hour and a half flight keeps us from enjoying the wonderful 30 degree weather back in West Lafayette.


I am a Junior student manager at Purdue and will be chronicling stories of Boiler baseball throughout the entire season as I travel with them. There will be game previews and recaps for each weekend, as well as some “behind the scenes” stuff.