Finally….HOME GAMES!! After 6 consecutive (and successful) weekends on the road, it’s nice to finally take a break from traveling so much.

I’m not really sure yet how my home weekend reviews are going to turn out, considering I won’t have any interesting or funny stories to share with you from the bus rides or anything like that. I’ll do my best to give you less info on the "game recaps" and more "behind the scenes" stuff like I hoped to do. It’s a bit harder to take notes during home games, because instead of just taking film, there’s other camera work and pitch speed that needs to be done as well. Typically a page of notes for a game will look like this: 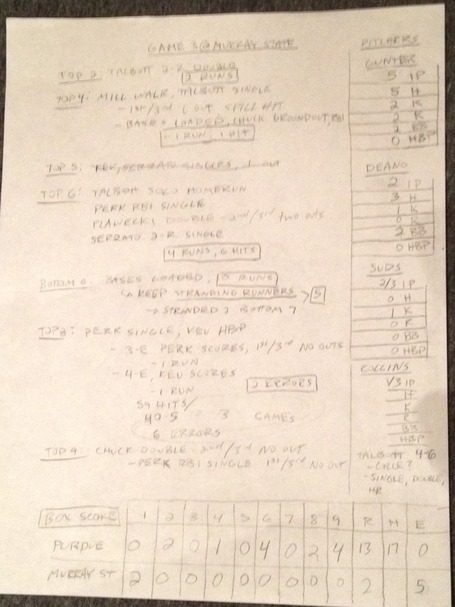 Also, a big thank you to all of you who came out for the home opener against Louisville. What a way to start off the final season at Lambert Field! That’s one of the best, if not THE best Purdue baseball game I’ve seen. Unfortunately I can’t include last year’s walk-off win against IU since I left to go home after the 7th inning (poor decision on my part). For those of you that DIDN’T attend Tuesday…well I’ll keep my comments to myself.

Now to the 2 games this week…Louisville was just a fantastic game to watch. Freshman Connor Podkul pitched 6 no-hit innings, and absolutely dominated Louisville’s lineup. Their team batting average was 5th in the nation, while Purdue’s was numero uno. Unfortunately, Podkul was taken out after 6 while throwing just 59 pitches. I meant to ask him why he was taken out, but my guess is that his arm may have been getting sore since he had Tommy John surgery last year.

On the other side, Freshman Jared Ruxer was pitching a gem for the Cardinals, giving up just 1 run on 3 hits in 7 innings. Going into the 10th, the game was tied at 1, and I was on the edge of my seat…literally. Junior Angelo Cianfrocco lead the bottom of the 10th off with a double, and Senior Andrew Dixon’s bunt moved him over to 3rd with 1 out. Naturally, at this point, I decided to start taking a video on my phone in order to capture any game winning hit or whatever because I knew you people would enjoy it. I probably ended up taking 50-60 clips (in part due to Senior David Miller’s seemingly endless at-bat in which he finally got hit and was awarded 1st base) before Stephen Talbott finally got his walk off single:

And so ended the greatest home opener in Purdue baseball history as they beat 19th ranked Lousville 2-1 to improve to 17-4 on the season. This team is really something special. For those of you who haven’t come to the first 2 games, try and make it to one of the games this weekend against Penn State. I promise you’ll have a great time, and we can use all the support we can get.

The IPFW game followed in (unexpected) similar fashion to the Louisville game for the first 6 innings. As my dad put it, "the crafty lefty (for IPFW) had the hitters befuddled." His off-speed stuff was pretty good…his changeup and curveball were clocked at 65 mph, and his fastball was 83-84. Quickly adjusting to a 20 mph difference is no easy task.

The hitting struggles seemed to overshadow Robert "red hot" Ramer’s fantastic outing on the mound, limiting the Mastodons to just 3 hits and striking out a career high 9 batters in 7 innings. Down 1-0 in the bottom of the 7th, Junior Cameron Perkins finally got the offense started by hitting a solo shot over the left field fence, his 4th of the year. The Boilermakers tacked on 2 more runs that inning, and 3 more in the bottom of the 8th to secure a 6-1 victory over IPFW.

The team is now 18-4 on the year with an RPI of 10, nationally ranked, and has the nation’s best batting average (.346 through March 25th). This team may end up being the best baseball team Purdue has ever seen. You don’t want to miss out on a chance to see them play.

Also, I don’t think I’ll be putting up a Penn State weekend preview. I don’t really have enough to write about for that, so I’ll just have my usual weekend recap up sometime on Sunday after the game.