One of the projects I want to work on over the next few months is improving the recruiting section of the site. By that, I want to add to the spots on the left side of the front page. I've added the Trevon Bluiett profile to the list of targets, and if I happen to see any other potential recruits I'll attempt to update their profile with my personal observations, kind of like how I saw Ronnie Johnson, Jay Simpson, and Raphael Davis this past season.

With that in mind, let's take a look at the recruiting situation as it stands right now. Here is the updated scholarship grid. 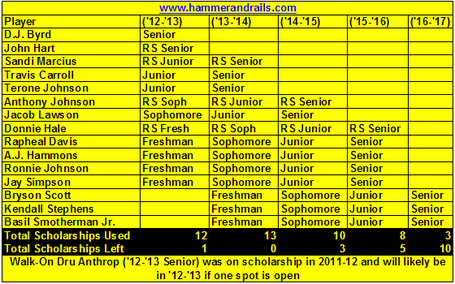 As you can see, the true bind comes during the 2013-14 season, where we are currently full. There is a spot open in 2012-13 open, and Trency Jackson looks to be the target with his upcoming visit in April. Jackson, a 6'2" shooting guard that seems to be a pure scorer. He averaged 25.3 points, 6.6 assists, and 3.7 rebounds as a senior at Jackson Wingfield High in Mississippi. He then sat for a year because of eligibility issues at Southern Miss, not playing a game, before transferring to Northwest Florida State College for a season of JuCo ball. He led them to the NJCAA Final Four and a 32-2 record with 10.3 points, 3.1 rebounds, 1.6 assists, and 1.3 steals.

At Purdue he projects as a bit of a hybrid guard, which could be beneficial given Lewis Jackson's departure and Ronnie Johnson's youth. I like that he is active defensively with all the steals, and he clearly has a history of being able to score. Since he did not play at Southern Miss, he would have three years of eligibility remaining.

That is where the scholarship issue comes into play. We have room for him in 2012-13, but not in 2013-14 unless there is an early departure. When I look at the scholarship grid I don't see a threat for an early departure to the NBA (unless someone like Terone Johnson just unexpectedly explodes). Travis Carroll would not be an early departure, and Sandi Marcius could be too valuable in terms of depth to be encouraged to do the 5th year transfer option. None of next year's four freshmen are really one-and-done candidates, either.

We've had open spots unexpectedly though. Patrick Bade moving to football opened this year to put Dru Anthrop on scholarship. That open slot allowed us to recruit A.J. Hammons for next year (as Bade would have counted in 2012-13 too), and another one came open because of Kelsey Barlow. Should Jackson commit, I can see Purdue moving forward next year and not facing the necessary decision until next offseason. One possibility is the Donnie Hale prep school route for Smotherman/Scott/Stephens. That would open up a 2013-14 spot, Marcius stays, Jackson has a spot, and we fall back to only two spots open for 2014-15.

If we don't get Jackson, I would imagine that Anthrop gets the scholarship again for his senior season unless we get a one-year, Brandon Wood-type of transfer (Alex Oriakhi?). It also leaves the 2013-14 roster set, and three spots open for the Class of 2014, of which we do not yet have a commit. Five-star Jaquan Lyle, a 6'4" guard from Evansville, is the top target for 2014, and he already has offers from Purdue, Indiana, Illinois, Ohio State, and Xavier. He's the top rated player in Indiana for that class, and it would be very nice to keep him in state. The shooting guard position will be open that year too with Terone Johnson finishing up the season before.

The rest of it is a crapshoot, because you're looking at a year and a half before many of these kids can even sign. By the 2015-16 season there could be as many as five spots open to go with five slated seniors that year. The kids in that class are finishing their freshman seasons of high school right now, and any number of factors can change that landscape. The 2013-14 and 2014-15 seasons look to be Purdue's big window of winning the Big Ten and reaching a Final Four, so what happens in those seasons can have far-reaching implications.

In terms of stars, things look very good. All four incoming players next season are four star guys by one service or another, joining D.J. Byrd, AJ, and TJ as current four-star commits on the roster. Stephens and Scott are four-stars for 2013, with Scott possibly jumping to the five level over the summer. Sure, the 2013-14 loses DJ, but it loses one four-star for two coming in, and the remaining guys are all three stars. That's a nice balance of talent.

Next year Purdue will have seven four-star players or better on the active roster. By comparison, Indiana's OMG TOTALLY AWESOME UNANIMOUS NO.1 BEST TEAM EVAR will have... seven players at four stars or better (Creek, Watford, Elston, Zeller, Perea, Ferrell, Hollowell). Zeller, Perea, and Ferrell are better players as five stars, but the talent gap isn't exactly a huge gulf. By the 2013-14 season Purdue will be at eight guys on the roster with four-star or better talents, while Indiana will be at six (or worse, depending on NBA defections for Zeller, Creek's oft-injured status, etc.).

We're certainly at a very interesting time for Purdue basketball. It is my hope that this recruiting breakdown answers some questions and makes you as excited as I am about the future. Next year's freshmen will be a big impact simply because we have a large class (plus Hale) making their presence felt with only one senior that has played a significant role. If they adapt well like a certain class before them, expectations will quickly rise.