Share All sharing options for: Boilermakers take 2 out of 3 from OSU to start conference play

Another weekend, another doubleheader. For some reason we just can’t seem to get away from the bad weather. Thanks to the rain on Friday, we were at Bill Davis Stadium for 3 hours until the coaches finally decided it would be best to postpone Friday’s game and play yet another doubleheader on Saturday. The weather actually wasn't too bad, but according to the meteorologist in the press box it wasn't going to get any better. We spent the rest of the night eating dinner, watching the Bobcats of Ohio ALMOST upset the Tar heels, and watching IU lose to Kentucky (while simultaneously wondering where the hell the defense was).

Anyway…we were actually able to practice on Thursday night, so going into Saturday’s games the team wasn’t completely cold. As soon as we got into Columbus on Thursday night we headed to the all-turf Bill Davis Stadium to get in an hour long BP session. We were greeted by ten or so Buckeye fans by the left field foul pole who were cheering whenever outfielders caught balls or players hit homeruns. They cheered most for Ben "khakis" Turner (The baseball SID) who made some fantastic shoestring catches in left field in his stylish khaki pants. 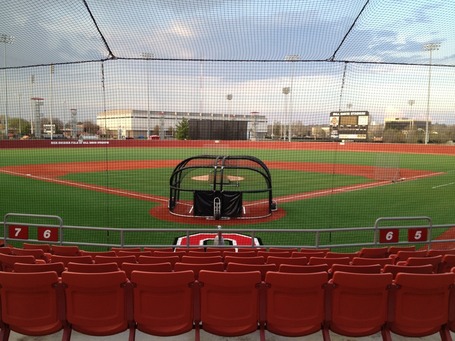 Game 1 of the doubleheader featured a back and forth game in which both teams combined for 26 hits. Purdue scored 2 runs in the top of the 1st inning, thanks to a Cameron Perkins 2-out single and Barrett Serrato's double which scored Perkins and Junior Kevin Plawecki after he reached on a throwing error.

Teams traded runs throughout the next 6 innings, and thanks to 3 Ohio State errors, Purdue took a 4-3 lead heading into the top of the 7th inning. Junior Stephen Talbott and Senior Tyler Spillner then lead off the inning with back-to-back singles. After an Eric Charles bunt and Cameron Perkins intentional walk, the Boilermakers put together 3 singles in a row to score 3 more runs with 2 outs in the inning. Ohio State was able to get back 2 runs in the bottom of the inning, but it wasn’t enough as the Boilermakers took game 1 of the doubleheader, 8-5.

Senior Joe Haase allowed 3 earned runs over 6 1/3 innings while striking out 7 batters. Blake Mascarello and Brett Andrzejewski combined for 2 2/3 innings of scoreless 2-hit relief to finish out the game.

Coach Schreiber’s brother was kind enough to let us eat at his soon-to-be Chumley’s that was under construction on Ohio State’s campus (unfortunately, only Gatorade and Mountain Dew were provided). We ordered some pizzas and watched the first half of the OSU/Syracuse game on the amazing 80” televisions that were up and running on the second floor.

For some reason, Ohio State seemed to come out flat in game 2…or maybe it was just due to the fact that Purdue dominated the game from beginning to end. They again struck first, scoring 3 runs in the top of the 1st inning after a double steal and error on OSU’s catcher on the throw to second base.

I barely write down any notes about Ohio State during this game because the only run they got was in the bottom of the 9th off of a bloop single to ruin Purdue’s hopes of a shutout. However, Ohio State did have a few chances to score some runs. They had runners on 1st and 2nd with no outs in the bottom of the 4th, but a double play and strikeout by Senior Lance Breedlove squandered any effort the Buckeyes had. Purdue also turned two other double plays during the game.

Breedlove scattered 9 hits and one run through 9 innings in the first complete game of his career. He only walked 1 batter while striking out 10, and lowered his ERA from 4.18 to 3.41 after the outing. That looks like a potential B1G pitcher of the week performance to me. No one really stole the show hitting-wise for the Boilermakers, but 17/19 batters had at least one hit on the day (that includes game 1 of the double header).

Looked like Ohio State finally decided to come out and play today, similar to the way their basketball team did the night before with a win that advanced them to the Final Four in New Orleans. It wasn’t so easy, however, as the Buckeyes carried a 2-1 lead into the 8th inning. The Boilermakers only run at the point was courtesy of a solo shot from Senior Barrett Serrato in the top of the 2nd; the first run of the game. Purdue had a chance in the top of the 5th when they loaded the bases with one out, but two consecutive pop-ups ruined any chance of scoring in that inning.

The Boilermakers didn’t go down quietly, as an RBI triple from Junior Kevin Plawecki in the top of the 8th tied up the game. A RBI single by Junior Angelo Cianfrocco saw the Boilermaker’s first and only lead of the game at 3-2. Ohio State countered with 3 runs in the bottom of the 8th inning, as they were able to load the bases with no outs and pair that with some efficient hitting.

Still, not all hope was lost, as Senior Barrett Serrato tallied in another RBI in the top of the 9th, singling in Kevin Plawecki with two outs. Senior Ryan Bridges then struck out looking with runners on to end the game as Purdue dropped game 3 of the series.

As we take the bus ride back to West Lafayette, the mood is a bit disappointed, because this team absolutely hates losing. But it was a successful opening B1G weekend, being able to win 2/3 games in the 1st conference series of the year on OSU’s own turf.

I’ve also found that a lot of fans around the areas that we visit are very complimentary towards the team. Even some of the ushers at the front gate of Bill Davis Stadium were saying “Go Boilers” or “Boiler Up” as I walked by. The Ohio high school basketball state finals were also going on this weekend, and are held in OSU’s Schottenstein Center. A lot of fans that were there for those basketball games were saying the same thing to the baseball team, or mentioning they were alumni.

This week we will finally have our first home game of the season -Tuesday evening against 22nd ranked Louisville. Wednesday will feature a matchup with IPFW, followed by the first B1G home series with the Nittany Lions of Penn State that weekend. If you’re in town, make sure to come out and support your Boilermakers as they continue to have a fantastic season!!