We rolled into Wichita, Kansas on Wednesday afternoon and had a chance to practice at the turf field and get a short lift in afterwards. I figured I’d take my time during batting practice to check out the basketball arena, considering our game time on Thursday was moved up due to Wichita State playing VCU that night in the NCAA tourney. The men’s basketball locker room happened to be open, so I went and checked it out (although I probably would have gotten in trouble had I been caught).

All basketball aside, the baseball stadium was pretty sweet. They have some sort of shrine out front honoring all their players. Also, the outside of the skybox shows off their program success; imprinted were all of the CWS appearances and Missouri Valley Conference championships. They have won 20 MVC regular season titles, 17 MVC tournament titles, and have 27 NCAA Tournament appearances: 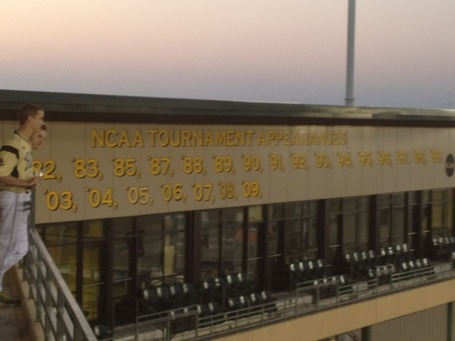 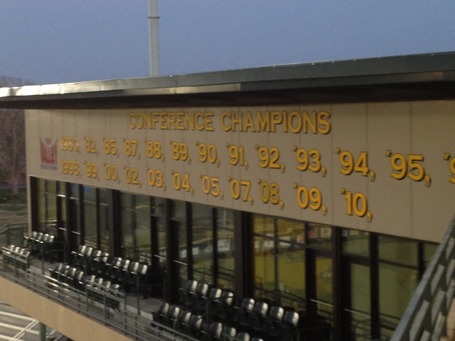 Thursday’s game brought us some great weather – high 70’s and sunny. Wichita State scored first, (seems to be a trend for the opposing teams) getting a solo homerun from Don Lambert in the bottom of the 2nd to go up 1-0. The rest of the game went back and forth for the next four innings. Purdue scored 2 in the top of the 4th thanks to a leadoff double by Junior Kevin Plawecki, and 2 more hits in the inning. Wichita scored 1 run each in the 4th and 5th innings, followed by another Purdue run in the 6th to tie the game at 3 runs each.

"The Pack" bats then came alive in the top of the 7th, as they scored 5 runs off of 5 hits and carried the Boilermakers to an 8-3 victory. Senior David Miller had the biggest day, going 4-5 with 2 stolen bases. Junior Cameron Perkins also had a stolen base to go along with 2 doubles. Sophomore Jack Deano and Senior Blake Mascarello pitched a combined 4 1/3 innings of scoreless ball out of the bullpen, and Senior Robert Ramer gave up just 4 hits in 4 2/3 innings in his first start of the season.

Today started off rather interesting. On our way back from lunch to the hotel, a certain individual decided it would be funny to moon the whole team as we were on the bus…and it actually brought a few laughs from the players. I’m sure that particular person had some anger built up not only due to our win yesterday, but also due to their loss to VCU in the NCAA tournament. Yesterday was not the best day to be a Wichita State fan.

I seriously can’t remember a day in the past 2 or 3 weeks that hasn’t brought at least 15 mph winds. It was no different today, as my hat flew off twice on the 20-second walk from the bus to stadium. The wind ended up being a factor; there were a total of 3 homeruns hit in the game.

The Boilermakers finally struck first in this game, thanks to a bunt and pass ball that made it 1-0 after the top of the 1st. The opposing team had scored 1st four of the past five games. Wichita State put up 3 runs in the bottom of the 5th, but the Boilermakers answered with 4 in the top of the 6th, courtesy of Sophomore Sean McHugh’s 3-run homerun into left center. Junior Cameron Perkins added a 2-run homerun in the top of the 8th, making the score 10-4. Wichita State’s Johnny Coy scored the only one run after that, (a solo shot to left field) and the Boilermakers extended their win streak to 10 in a row, with an overall record of 14-1 (and not a single home game played yet).

Senior starter Joe Haase issued no walks to go along with 5 strikeouts in 6 innings of work in his best start to date. Although the offense is getting a lot of credit for these wins, the defense has only committed 1 error in the past 6 games (knock on wood).

Wichita State was kind enough to treat us to dinner in their skybox after the game. The team stayed there for quite a while in order to catch Lehigh upset Duke and Purdue win over St. Mary’s. The next two days will be two long days, as Saturday we have a doubleheader followed by a 12 hour bus ride back to campus on Sunday. 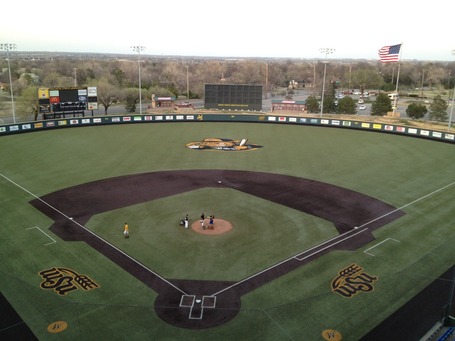 Wichita State came out to play on Saturday. The wind again was a factor, featuring three more homeruns in game 1 of the doubleheader.

I think I must have jinxed us with the mention about only 1 error in the past 6 games; games 3 and 4 the Boilermakers combined for 6 errors and managed only 5 runs in 18 innings.

In game 1 of the doubleheader, Senior Lance Breedlove pitched 6 innings of 4 run ball, while striking out 5. Wichita State got back-to-back homeruns in the bottom of the 1st inning from Johnny Coy and Don Lambert, and Purdue was never able to recover from that deficit.

Junior Angelo Cianfrocco connected for a solo shot in the top of the 3rd inning. Although his average doesn’t show it, he had been hitting the ball extremely hard but not catching any breaks. Hopefully that homerun will be the first of many for the lefty.

Senior Barrett Serrato doubled in Junior Kevin Plawecki in the top of the 9th, but the Boilermakers failed to rally for the victory, dropping game 1 by a final score of 8-2.

Game 2 of Saturday’s doubleheader began just 30 minutes after the end of game 1. The bats were ready to go as the Boilermakers scored 1 run in the top of the 1st and 2nd innings, thanks to leadoff singles in both innings.

Wichita State answered with one run each in the bottom of the 2nd and 3rd, but a Tyler Spillner leadoff single andKevin Plawecki double gave Purdue a 3-2 lead after 5 innings. However, the Boilermakers failed to score the rest of the game, thanks in part to stellar relief pitching from Wichita State Freshman A.J. Ladwig. The Shockers then tacked on 3 more runs to win 5-3, sweep the doubleheader, and earn the split for the 4-game series.

Senior Calvin Gunter pitched 4 2/3 innings of 2-run ball. Senior David Miller finished 2-4 with 2 doubles, making him 7-14 on the weekend with no strikeouts in 18 plate appearances. Although Purdue lost the last two games, they still finished 6-2 on the spring break trip and had some fun in the process.

We left at 8:30 this morning for the trek back to West Lafayette. How bad can a 12-hour bus ride be? Optimistically, I’m guessing we’ll be back around midnight since we have to stop for both lunch and dinner, and we are switching bus drivers somewhere around St. Louis.

Next weekend finally starts B1G play, as we travel to Columbus to take on the Buckeyes of Ohio State. Hopefully we can carry some momentum from this trip and start off conference play on the right foot.


I am a Junior student manager at Purdue and will be chronicling stories of Boiler baseball throughout the entire season as I travel with them. There will be game previews and recaps for each weekend, as well as some "behind the scenes" stuff.