Share All sharing options for: Wichita State preview and (mid)week in review

Before getting into this weekend’s matchup between the Boilermakers and Shockers of Wichita State, I’d like to mention a few things that have happened during the week so far.

In between our trips to Murray State and Wichita State, we took a detour to Springfield, Missouri for a midweek game on Tuesday night against Missouri State.

Coincidentally, Springfield is home to the world’s largest Bass Pro shop, so after a wonderful BBQ dinner on Monday we went across the street to check it out. It was actually pretty cool; I felt like I was inside of a zoo or something. It featured quite a few large fish tanks, (one even had a live alligator inside) along with a huge selection of knives, boats, guns, and camouflage apparel, among other things.

Speaking of camouflage, Senior Sean Collins was up to his antics again, trying to scare players on the team by hiding next to the camouflage and next to a life size bear that everyone was taking pictures with. He even scared Head Coach Doug Schreiber, which was absolutely hilarious: 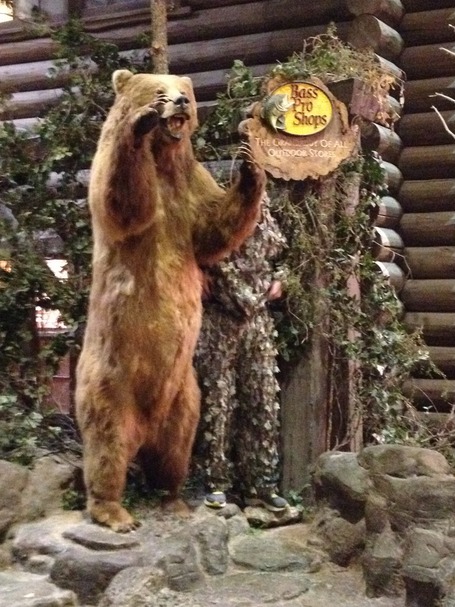 Collins got Schreiber while standing here ^... 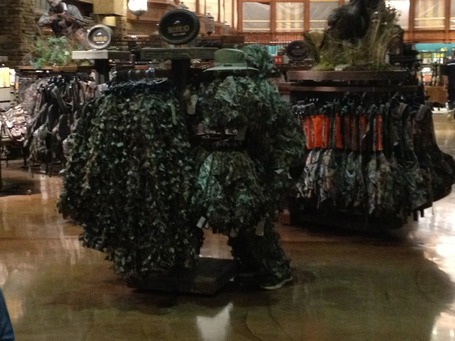 ...and some other players when standing behind the clothing racks ^

The next day was game day, and featured a tight game that had the Boilermakers up 3-2 in the 8th inning. Junior Cameron Perkins then hit a solo homerun in the top of the 8th to make it 4-2, which ended up being the final score as the Boilermakers won their 8th game in a row to go to 12-1 overall. Junior Nick Wittgren pitched a scoreless 8th and 9th, earning his 16th save of his career and breaking the all time Purdue career saves record.

Freshman Connor Podkul made his first start of the season, and he had some nasty stuff. He had a no-hitter through the first four innings, and gave up just two hits before being taken out in the fifth. Junior Blake Mascarello continued to impress out of the bullpen, pitching 2 2/3 innings with 4 strikeouts and picking up his 4th victory of the season.

Junior outfielder Stephen Talbott was named B1G player of the week, (as I predicted in my last post) going 10-17 for the weekend against Murray State. Among those hits were two triples and a solo homerun, and he almost hit for the cycle in Sunday’s game (just a triple short).

The team has also started growing mustaches, some more superior than others. I’ve asked the players how it got started, but no one really knows. Stephen Talbott blames it on the "lack of razors" and the fact that the team has been "away from society." I, however, believe it has more to do with a "NHL playoff beard mentality" more than anything.

Now on to the Wichita State preview…This game is a four-game series, featuring a doubleheader on Saturday. All four of Wichita State’s pitchers come in with a sub-four ERA. Thursday’s game will feature Purdue’s Robert Ramer (0-0, 13.50 ERA) against Wichita State’s Mitch Mormann (2-2, 3.86 ERA). Ramer’s ERA is a bit misleading, as he has only thrown 2 innings on the year so far. Mormann has a k/bb ratio of 0.75, which could give him some trouble against Purdue’s offense.

Redshirt Junior first baseman Johnny Coy leads the way offensively for the Shockers. He’s batting a team best .394 with 5 doubles, 2 homeruns, and 23 RBI on the season.

Wichita State has a team ERA of 2.45, so it seems as though this series will show which team will be able to win the close games. However, I think the Boilermaker offense will continue to stay hot and put up a good amount of runs (as they have done all season). My guess is Purdue takes 3 out of 4 games this weekend, putting them at 15-2 on the season, with an extremely successful 7-1 spring break trip.