Friday brought a beautiful day for some college baseball. We woke up for breakfast at 9 a.m. and saw clear skies and 60 degree weather, although it was a bit windy. The wind provided some difficulty for the outfielders during the game, as well as a controversial foul ball call. The first thing I noticed when we arrived was the fact that there were no seats or bleachers at the stadium. John Reagan Field was unique in that it had terrace seating (something I was not equipped for because I didn’t have a lawn chair with me): 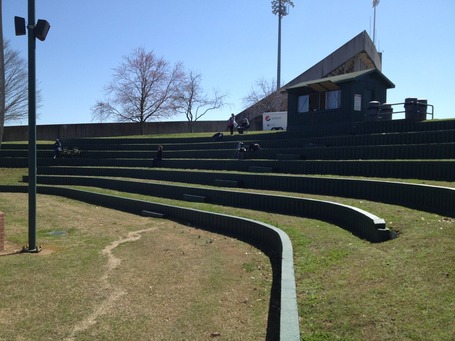 I also found out on the bus trip here (6 hours, by the way) that although Murray State is known as the "Racers," they are known as the "Thouroughbreds" ("Breds" for short) for baseball only. I guess in 1961 when they changed the name from Thoroughbreds to Racers, the baseball team had just purchased new uniforms and equipment bags with the old "Thouroughbreds" imprinted on the front. They didn’t want to spend the extra money to change the names, so they decided to keep Thoroughbreds and that’s how it’s been ever since.

The first 5 innings saw the most action of the game, as Murray State took a 1-0 lead into the 3rd after a leadoff double from Ty Stetson in the bottom of the 1st inning. The Boilers answered with 3 runs in the top of the 3rd, thanks in part to Junior Stephen Talbott’s leadoff triple (his second on the season). In the top of the 4th, with two men on and two outs, Senior Tyler Spillner hit a bomb to the right field fence…but it was ruled foul by the 1st base umpire (very similar to a Kevin Plawecki at bat earlier in the year against ECU that was also ruled foul).

The Boilermakers still managed to tack on one run that inning, but the Racers didn’t go away just yet, as they were able to load the bases in both the 4th and 5th innings. Senior starter Joe Haase, however, managed to give up just one run in those two innings. That gave the Boilermakers a 5-2 lead after 6 innings. Senior David Miller somehow managed another RIDICULOUS diving play at shortstop in the bottom of the 7th… I’ve been asked by the team to submit the clip to ESPN in hopes of it being a Top 10 play on Sportscenter.

That 5-2 score would end up being the final as the Boilers took the victory to improve to 9-1 on the season. Senior Blake Mascarello had another fantastic relief outing, pitching the last 4 2/3 innings, giving up only 1 hit to go along with 4 strikeouts. Tomorrow would feature Senior Lance Breedlove against Cameron Finch of Murray State.

This game…WOW…that’s all that I have to say. But, seriously, the Boilers put the hurt on in this one. Big time. It was easily the most complete game the Boilermakers have played to date. Everything was clicking: hitting, pitching, and defense.

The offense put up video game-like numbers: 30 hits, 22 runs, and that’s just the beginning. Six Boilermakers had 2 or more RBI and 3 players had 4 hits on the day. Believe it or not, they actually trailed 1-0 after 2 innings, but from then on it was all Boilermakers. Highlights of the day included a Tyler Spillner three run homerun in the 4th, (payback for yesterday’s homerun that was called foul) a Kevin Plawecki two run homerun in the top of the 7th, (his 3rd homerun in 4 games) and Stephen Talbott’s second triple of the weekend. There was so much that went on that I didn’t have the time, or enough room in this post to include everything that happened in this game.

The best part, though, was when Senior reliever (yes, reliever) Sean Collins stepped into the batter’s box in the top of the 9th. He was walking around all “geared up” sporting wristbands, sunglasses, batting gloves, and a bat in hand. Coach Schreiber then decided to insert him in the lineup, seeing as the score was 14-1 at this point. Unfortunately, Collins struck out swinging on three straight nasty sliders (similar to an AL pitcher in an NL ball park during interleague play). He was, however, able to somewhat redeem himself by getting on base after Purdue batted through the lineup that inning (by getting hit in the helmet).

Senior Lance Breedlove had another great outing, going 6 innings, and giving up just 2 hits and the only run of the day to the Breds. The bullpen, consisting of Junior Brett Andrzejewski, Freshman Connor Podkul, and Junior Robert Ramer, gave up just 2 combined hits while each pitching 1 inning of relief. I can’t forget to mention the fact that the defense didn’t have any errors in the game. This was just a great baseball game for the entire Boilermaker team.

Tonight we have a 10 p.m. curfew, due to the time change happening overnight. Tomorrow the Boilers will look for a sweep of the Murray State Thoroughbreds, as well as their 3rd 3-0 weekend of the season.

Thanks to the time change, I got a total of 4 hours of sleep. Not really sure why I couldn't sleep, but I was hoping the team wouldn’t be as tired as I was for the entire day. Game time was scheduled at 1, with Senior southpaw Calvin Gunter starting on the mound.

Murray State began the game with 2 runs in the bottom of the 1st, scoring in the first inning of every game this weekend. That was all they would get for the game, as Gunter settled in and gave up just one of his five hits after the 1st inning. He totaled 5 innings of 2-run ball with 2 strikeouts.

The bats came out again today on “hit day,” and the team showed no signs whatsoever of a lack of energy The Boilermakers tallied 13 runs on 17 hits, and totaled an astonishing 40 runs on 59 hits for the entire weekend. I’m sure that has to be some sort of record. Juniors Stephen Talbott and Cameron Perkins both went 4-6 on the day, with Talbott just a triple short of hitting for the cycle. It was Talbott’s second 4-hit game of the series, as he finished 10-17 on the weekend (look for him to be recognized as B1G player of the week).

The Boilermakers went on to win 13-2 and complete the weekend sweep of the Breds, improving to 11-1 on the season. Tonight we will enjoy a dinner at Applebee’s after the NCAA Selection Show, and players filling out multiple brackets afterwards. Tomorrow we head out at 10 a.m. for a Tuesday midweek game at Missouri State, followed by a 4-game weekend series at Wichita State to finish the spring break trip.

A new trend that’s been sweeping the nation this week, and the team, has been the game “Draw Something.” This simple game available for smart phones, involves two players – one which chooses from a list of three words to draw, and the other which has to guess what the word is. If guessed correctly you both earn coins, and you get a win streak going. After playing a while, you realize we all still draw like we’re in 3rd grade. Right now Senior Andrew Quinnette and I are at 92 straight; I doubt anyone else on the team is even close to that.


I am a Junior student manager at Purdue and will be chronicling stories of Boiler baseball throughout the entire season as I travel with them. There will be game previews and recaps for each weekend, as well as some "behind the scenes" stuff.