Purdue is now down to 10 recruited scholarship players with Jay Simpson's injury.

Share All sharing options for: Jay Simpson Injury: Freshman Forward Out For Season

It appears as if the foot injury that hampered freshman forward Jay Simpson this summer during the Italy trip has ended the young man's first year in West Lafayette early. After averaging 7.6 minutes and 2.6 points in the first 10 games of the year Simpson has decided to shut it down according to GBI:

Freshman Jay Simpson will miss the rest of the season due to recurring problems with his foot, according to a #Purdue release.

Since Simpson was battling a lingering injury and he shut it down in the first 30% of the season he can apply for a medical redshirt and still play for four more seasons. Four of the 10 games (Bucknell, Hofstra, Villanova, and Oregon State) he played in were in our one exempt tournament, and those count only as one game for scheduling (and now redshirting) purposes. It is likely he will get the redshirt because Carl Landry did the same thing in the 2005-06 season when he played a few games after coming back from a torn ACL before shutting it down and coming back the next year for his last year.

I think this is a good move overall. I can see Coach Painter is trying to limit the rotation already and Simpson, while he has done a few good things, was not one of the top eight guys. This allows him to get healthy and be more of a contributor next season.

Simpson's best game so far was against Lamar where he played 11 minutes and scored six points and grabbed five rebounds. He also plays at a position of great depth, so this only means more minutes for Travis Carroll, Jacob Lawson, and Donnie Hale, who were playing more than him, anyway.

Part of the issue was also his playing weight, as he was listed at 6'9" 268 pounds. Coach Painter was on record as saying that weight and conditioning was an issue:

"Jay has made every effort to rehab his foot in order to continue to contribute on the court this season, but it hasn't come along as quickly as we would have liked," Purdue head coach Matt Painter said in a statement. "The most important thing for Jay right now is to get completely healthy so this injury doesn't remain a problem down the road."

Here is what it means to the scholarship graph: 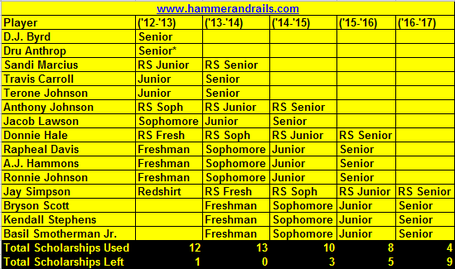 If it makes Simpson a better player in the long run I am for it. Coach painter has been very high on Jay, saying he could be the most talented player on the team, but not in shape:

So that is what it is. It sounds like they tried to give it a go of playing him, knowing the medical redshirt was a possibility. Once they got to the limit and saw something the coaches did not like they pulled the plug on Jay's season. It essentially makes him a Class of 2013 recruit now and gives that group a true big man. The future is still very bright as Jay can get himself in shape and work hard to come out like a beast next year.