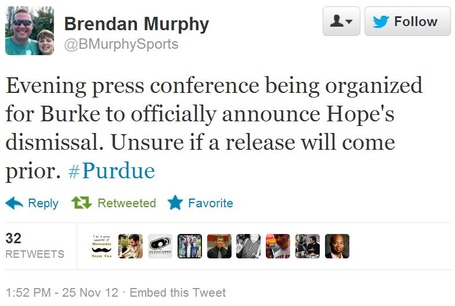 If this is another false Twitter rumor or a joke, I am going to be pissed. We've already had to go through that once. Or it could be worse, Burke could announce another 1-2 year contract extension for Hope.

Okay, those scenario's are not likely to happen, but I still had to put them out there. It is pretty much guaranteed that Hope is gone after today as Burke kicks him out the door. Burke could pull a cruel joke on us and name Nord Interim Head Coach, which would probably be worse, so I bet Tibesar will be named interim head. That put's a lot of pressure on him after only being at Purdue for a season.

I can't really say much since all we really have is this tweet. There seems to be nothing else on the web or on social media. If anything else pops up, we'll post it on here. Until we receive any other news, consider this a pseudo-open thread.