The various staff members of Hammer & Rails give their call on today's game.

It's been a busy week for everyone, so I only have two prediction to add to my own. Also, the week 6 TV schedule is here.

I have faith in this Purdue team. I like that our strengths seem to match up with their weaknesses. There is an energy about this team and the fans based on what I have seen on twitter this week. Like I said yesterday, a win over Michigan in 2000 started a very special run. Beating Michigan tomorrow can do the same thing, and I think Purdue finds a way. Purdue 31, Michigan 27

This game means everything to us right now. Purdue can't have another defensive breakdown like we did against Marshall if we want to win this game. We'll also need to keep Denard Robinson in the pocket and force him to be a passer and not a runner. When he's forced to that he makes mistakes. I have a feeling that this going to be another close game, but I have faith in the Boilers. Purdue: 32, Michigan: 28

Any way you slice it, this game should be epic. I'm incredibly excited to see Denard Robinson face off against our defense, which I think is becoming stronger with each game. If our D-Line can get consistent pressure on Shoelace and contain him from doing any devastating damage with his feet, he will be forced to throw the ball which, frankly, he really shouldn't be allowed to do. I like our DBs chances against the Michigan passing game A LOT. Hopefully we can pick off a few passes, come up with a few key stops and do enough to completely shutdown the Michigan O by the end of the game. On offense, I would like to think that TerBush is going to start to look more like the guy we saw last week. But, even if he is "new and improved", he is going to have a tough challenge facing a talented Wolverine secondary today. If we can establish a powerful rushing attack with Shavers, Hunt and company, hopefully we can wear down Michigan's defensive front. Overall, I think this will be a tough, grind-it-out type of game for both teams since they can both shut down the passing game. If Purdue can limit its mistakes today, I really think we have the more talented team. Purdue 24, Michigan 21

This game will be tough for me in future years. Michigan is my top choice for graduate school and I have been doing research with them for them since May 2011. But for this weekend, I put my Michigan connections on the back burner, as Purdue still holds a very deep place in my heart that I don't think can ever be replaced, even by the Maize and Blue. I am expecting a good game, but not like last week's shoot out. Though Michigan has the 9th best passing defense in the nation, all of their opponents so far, including Alabama, have an averaged ranking of 95th in the nation in terms of passing yards per game (Alabama: 81, Air Force: 118, UMass: 97, Notre Dame: 84). This Purdue team will be the best offense Michigan has faced so far. Though Purdue has played EKU, EMU, and Marshall, they have put up 17 points against a Notre Dame defense ranked 16th in the nation, a team that Denard Robinson had troubles against. I don't expect Purdue to have the same offensive numbers as they had against the teams that were not Notre Dame, but I expect them to get enough points against Michigan to win the game. Unlike the Marshall game, I hope more gets done on the ground, as Michigan's run defense ranked 84th in the nation. On the other side of the ball, Michigan's offense has seemed to have plateaued so far this year. I hope this continues for one more game at least. Michigan will be well rested from their bye week after the Notre Dame lose and will be looking to bounce back, but I expect them to at least commit 2 turnovers. I think Denard throws at least 1 interception that will lead to a Purdue score in any way, shape or form. They may get the ball moving earlier, but Purdue's front line will continue to give Robinson trouble and force him to make bad throws. Purdue: 28, Michigan: 17 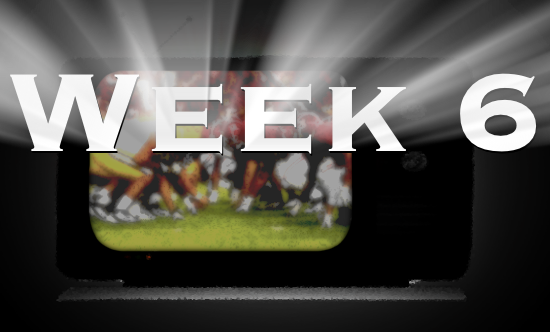 You wouldn't entrust your children to a convicted felon. Why would you entrust your college football knowledge with anyone less than the Sunday Morning Quarterback?

Loving that Florida line? Ready to knock some motherf**rs out? Before you put money down, compare point spreads and game totals from online and Vegas-based sports books, updating live in real time.

All of today's games making you feel a little overwhelmed? Relax. You're in good hands... Andy Hutchins guides you through Saturday's action.