I'll let T-Mill handle the actual recap but I have some major gripes I want to air.

Zone Offense: I'm not sure what our coaching staff is doing, but the lack of an actual zone offense is maddening. Running around the perimeter is not an offense. Chucking threes and praying they go in is not an offense. Actually having some set pieces would open up our offense and make those lulls disappear.

Matt Painter: I'm not going to say "Fire Matt Painter" but I am going to say "WTF dude." How can you let your team show up that flat? The team was energized for about five minutes. Five whole minutes. The game is 40 minutes long. Not exactly a good ratio. I expect some unpredictability but losing by 20 to a crappy PSU team is not an option ever. Worst loss of Painter's Purdue career, hands down. At least that Wofford team made the NCAA Tournament a couple years later.

The Seniors: Robbie showed up, sort of. Lewis and Ryne? Whole different story. I have never been more disgusted watching the leaders of the team play. Ryne looked it was his sophomore year again and Lewis clearly needs a break. He just looks beat up. I would say rest him for a couple games, but that would certainly guarantee us no shot at the Dance.

It's a pretty damning loss. Can't say it anyway else. According to Ben Jones on Twitter, Painter is letting it all fly in his press conference. That's good to hear. Sunday is a must-win. Lose that one and say hello to the NIT. Maybe we'll get a home game. 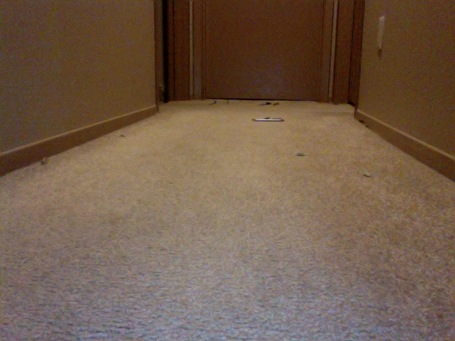 If you can't tell, those are the remnants of about seven Sharpies and pens. Plastic strewn everywhere. The life of a Purdue fan.