All Hail The Debut Of Boilermaker Special VII

Share All sharing options for: All Hail The Debut Of Boilermaker Special VII

I have to thank reader BoilerPaulie and the members of the Purdue Reamer Club for today's special event that I was invited too. Mrs. T-Mill and I rushed up after work to take part in the very small public unveiling of the newly refurbished Boilermaker Special, now dubbed the Boilermaker Special VII. Yes, the previous incarnation was Boilermaker Special V, but Special VI is the current X-tra Special (a.k.a., the small golf cart version).

This was an incredible honor, as the Boilermaker Special is one of Purdue's greatest traditions. It is the largest and heaviest official mascot in college athletics weighing in at 6 tons, and the tradition of having it has been around since 1940. The Reamer Club takes great pride in caring for the upkeep of the Special, and almost all of the money for its upkeep comes from private events where people rent the Special for a day.

The Special V debuted at the Notre Dame home football game in 1993, and has since logged over 200,000 miles and 10,000 engine hours. It made its famous trip (via train) to the 2001 Rose Bowl and goes to almost every road football game within reasonable driving distance. Unfortunately, after that much work it needed a new engine, transmission, and chassis.

That is why this current incarnation is now called Boilermaker Special VII. Only the basic body is still roughly the same. Special VII has a brand new 2012 Navistar International Chassis, a brand new MaxxForce Diesel Engine, and a new Allison transmission. Both Navistar and Allison were kind enough to donate these parts.

The Superstructure is still the same superstructure from Special V, but features a new "7" on the front above the cowcatcher. Wabash National donated the labor of fitting the old superstructure over the new chassis. Snow White Services also helped with the paint blasting, while Mike Raizor Automotive in Lafayette provided the new paint job. Blumling Design Group did the final detailing.

I must say the new Special looks sharps. There are few obvious changes to the naked eye other than the "7" on the front, but everything now looks cleaner and sharper with the new paint job. The new engine and transmission lacks the governor of Special V, so it can now reach speeds of at least 75 mph on the highway (and to outsiders, you're damn right this baby is street legal!). Cory Brewer, Chelsea Thomas, and Ben Hebbe will definitely enjoy the improved power as the current pilots of the Special.

As far as extras, they have new speakers installed and new padded seats in the coal car. Also, the steam whistle is at least 20 decibels louder, so if you're an incoming freshman living in Cary Quad like I was prepare to be awaked three weeks from Saturday. The brass bell is still the original bell from Special I back in 1940.

Most importantly, I got to take a ride around campus in the special. I had sat in the coal car of Special V, but I had never before taken a ride until today. I am 31 years old, but I must say I was grinning like a little kid for a good hour or so after the short ride. Yes, I was like, "I get to ride on the train." As an alum it was a very special moment for me. 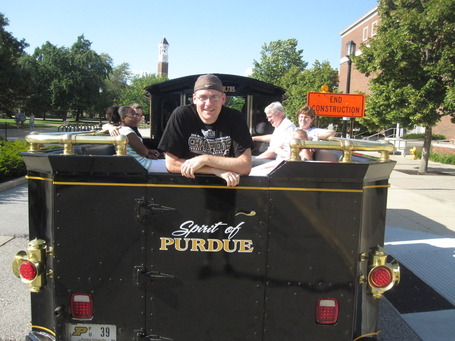 Giddy as a schoolboy

The Reamer Club is planning the official dedication during the Notre Dame game on October 1st, but today was pretty much the dry practice run. I am honored that I got to be part of the first group (with Chelsea as pilot) to ride on the improved Special. 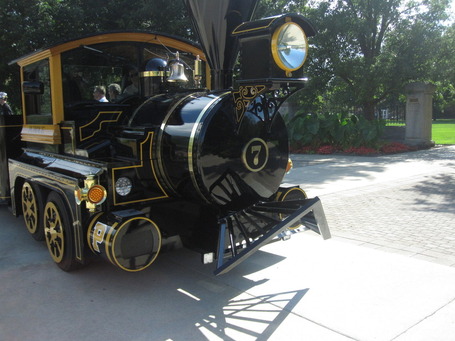 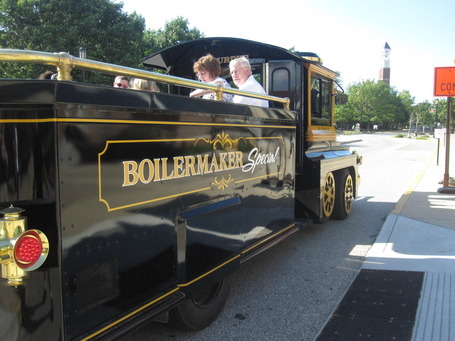 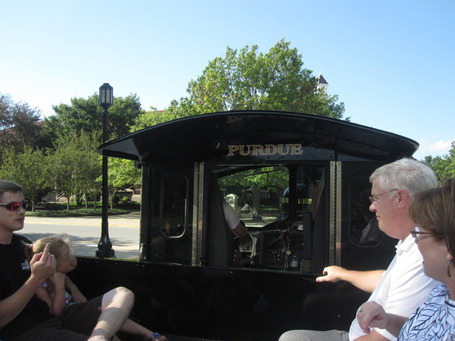