As many of you know, July Evaluation Period starts tomorrow (July 7th) and will be an excellent opportunity to get feedback on the progress and development of all the future Boilermakers and targets. The Live period means that coaches can observe recruits during July 6-15 and July 22-31. This period is followed by  the "AugustComplain About the Rankings Period."

The first event starts in Indianapolis with the Adidas Invitational (July 6-9). Despite being only it's second year,it will be one biggest tournaments in the nation and will draw nearly every high-major college basketball coach and scout to the north side of Indianapolis.

For those of you hoping to catch a future recruit in action, Ronnie Johnson, Basil Smotherman, and Derek Willis will be participating in the event.  Here is a cheat sheet for RJ, BS, and DW's pool-play:

Note: Derek Willis will be playing at Westfield High School (not Middle School). 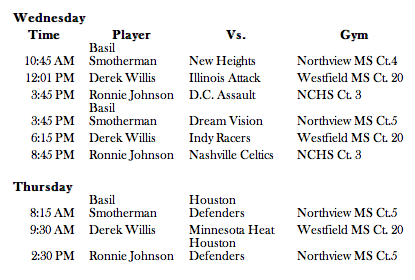 The Adidas Invitational is open to the public. Admission prices each day are $15 for adults, $10 for 18 & under, and free for pre-schoolers.

Beyond following the recruits, following the coaches footsteps should be equally as interesting.  It will give us a lot of insight on the priorities of both Matt Painter as well as the coaches we are competing against.