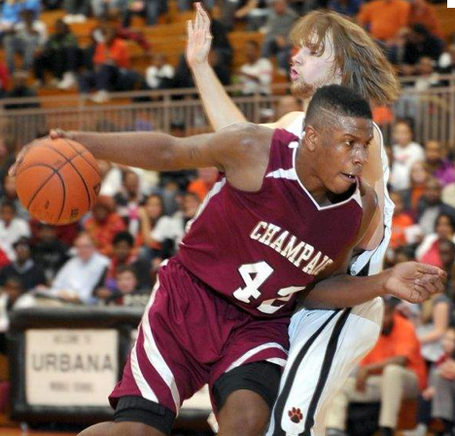 2012 commitment Jay Simpson has reinforced what we’ve known about him for sometime now: he has the tools and skill set to be a really, really good player at the next level.

For a kid that’s 6’9" and (likely over) 240 lbs, he has unnatural handles and is a very legitimate threat on the perimeter. While he isn’t going to stun anyone with athleticism, he has a bag full of tricks that will create mismatches at the next level.

The first thing I noticed about Simpson is that he’s playing about 15-20 lbs lighter than his was in his high school season,  an indication that he's working hard to improve his body. On the court, he still falls into some of the bad habits that he's been known to commit, but he’s clearly improving upon the areas that need the most development.

Simpson demonstrated that he is an elite prospect, without a doubt. Unfortunately, he still tends to fade into the background and becomes minor accessory to the team, instead of the high impact player that he's capable of being. It’s worth noting that his Illinois Wolves AAU team is one of the best in the state, if not nation, and is full of high-level talent. During July, everyone is trying to get noticed and improve their own stock, so it's difficult to assess how players will respond in a typical game situation. Either way, his size and skill-set alone should make Simpson a much bigger impact player whenever he’s on the court.

His ball handling is strong enough that he can pull down a rebound and bring it up the floor on his own. Although I don’t want you thinking he is a Robbie Hummel, he's quick for his size and has excellent court awareness. He creates mismatches as he has the skill set to play a 3, but the size to play a 4 (and possibly 5).

Simpson showed confidence shooting everywhere on floor and has displayed a variety of crafty jumpers off the dribble. I wouldn't call him a shooter, per se, but he's definitely not Nemanja "Stop shooting 3's!!!" Calasan. He drained a couple 20 foot turnaround jumpers off the dribble that looked impossible for someone his size to pull-off. He also showed a very impressive arsenal of post moves under the basket. He is also a great passer out of the post. When he draws a double team, he is very capable of finding the open man. He was much more active on the boards than he’s been before, an encouraging sign, but he could benefit from continuing to develop this area of his game.

Despite his natural ability away from the basket, his size and talent inside the paint left me wanting to see more of him in the post. He showed that he can dominate the post, but then disappeared on the perimeter and make less of an impact on the game. This also eliminates his chances of grabbing offensive rebounds and put-backs. This is a common knock on Simpson, and it's frustrating to watch. It was almost as if he didn't want to go down low because it was too easy for him. For someone his size, I would like him to develop more of a mean streak.

In my opinion, his ‘disappearances,’ for lack of a better term, are a function of conditioning, motivation, and coaching. I believe that all three of these things will be developed during his year at La Lumiere  and are very correctable. Regardless of what happens between now and Simpson’s  arrival on campus, it’s pretty clear that he has the talent and size to be a very unique player at Purdue. Think of a bigger yet less polished Draymond Green.

I hate to use this cliché, but Jay SImpson's ceiling is sky high….and much of it can be realized through simple motivation and playing to his strengths. Considering what Matt Painter demands of his players, there is no question that he'll be able to get Jay Simpson to reach his potential.